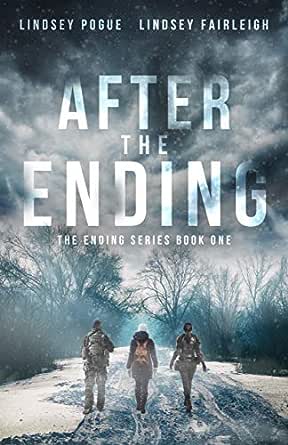 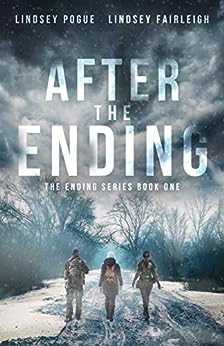 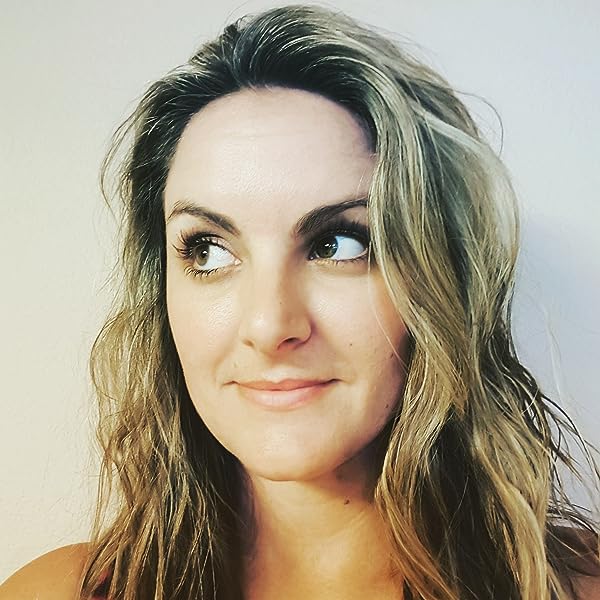 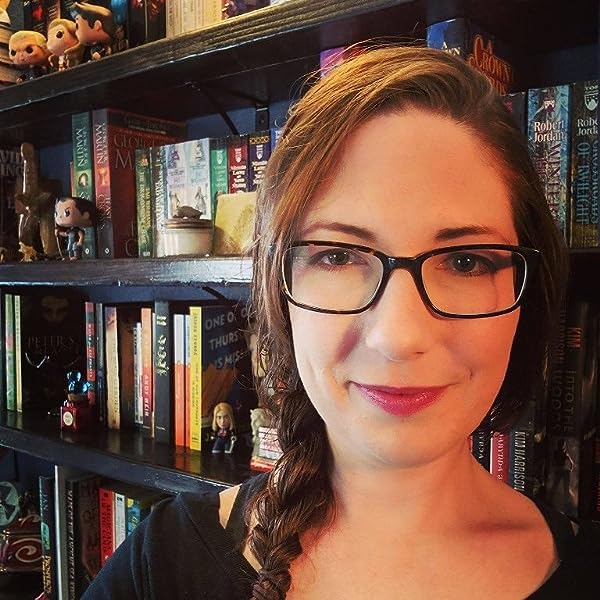 After The Ending (The Ending Series, #1) (English Edition) Kindle版 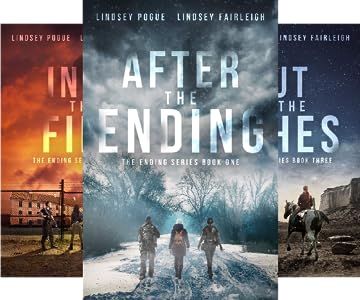 Lindsey Fairleigh is a former history teacher and current experimental cook who lives in Napa with her supportive husband and confused cats. Lindsey Pogue is a history addict, traveling fool, and food lover who dreams of the day she can go horseback riding, write, and read, all in a day's work. --このテキストは、paperback版に関連付けられています。

A-Canadian-in-Singapore
5つ星のうち2.0 Annoying but readable
2015年6月21日に英国でレビュー済み
Amazonで購入
This is not very good, but strangely still readable. It's quite repetitive - the 2 main characters are very similar (and also so incredibly immature and self-absorbed that you wonder why on earth their respective love interests bother). The bad guys are also all the same character (three times we run into essentially the same jealous, manipulative killer). And the story has more holes than Swiss cheese - civilization has collapsed, almost the entire population is dead, and the wifi is still working (despite the power grid going down, so there's nothing to power the router, servers, nor any easy way to recharge the laptop battery). Then you've got the character who can see the future, that sees the bad thing happening that ends the book on a cliff-hanger, but doesn't bother warning anyone, AND the other characters who can see that he's had a vision, but don't bother asking him what it was.... these idiots would never survive the apocalypse.
続きを読む
17人のお客様がこれが役に立ったと考えています
違反を報告
レビュー を日本語に翻訳する

Mikayla Gray (Mikayla's Bookshelf)
5つ星のうち2.0 Doesn't know what it wants to be...
2013年5月23日に英国でレビュー済み
Amazonで購入
I was torn about what rating to give this book. On the one hand, it was entertaining, fairly gripping and I found myself wanting to read the next instalment. On the other hand, getting through the book was a hard slog in places and I did skip a few pages here and there.
Set after a flu-like pandemic has wiped out 90% of the world's population, the story follows best friends Dani and Zoe as they make their way from opposite sides of the US coast to each other and presumably safety. Both meet up with and join various groups along the way and discover that the virus has changed the survivors in ways no one could have imagined.
Whilst I loved the fact the authors focused on the strong friendship between the 2 protagonists, this ended up ultimately being one of my biggest problems with the book. Post-apocalyptic wastelands, crazed survivors and horrific loss are all swept aside in childish, immature emails between the pair (and don't get me started on the presence of Wi-Fi in a apocalyptic wasteland!) which read like the boy-crazed ramblings of a pair of 15 year olds. These women are supposed to be 26 years old, yet spend their communications talking about the totally hot guys they meet, the skanks who hate them because they're soooo hot and irresistible and hand waving away things like attempted rape and murder in a line of email. It also meant you were reading the same thing twice as Zoe and Dani recapped the last chapters events for each other which slowed the book down and massively disrupted the tone and flow of the story, not to mention trivialised the events that had occurred. I get what the writers were going for here, but the abrupt switching between dystopian novel and fluffy chick-lit really didn't work.
The premise of the book was interesting and for a while it looked as though it was going to be a great book, and the introduction of so called Abilities for the survivors put a fresh spin on an old story which has so much potential. I can only guess that the clashing tones of the book are down to the fact that there are 2 authors, but it was hard to believe at times that you were reading the same book when you read a heart-breaking letter to one of the girls from a deceased family member or an account of the horrors committed by the so-called "Crazies", only to flick on a few pages and read an email about how hot so and so was, or how skanky so and so was - seriously these things read like they were full of smiley emoticons and pictures of initials written in a heart - like I'd accidentally picked up something out of the Sweet Valley High series.
I'm interested to see where the story goes, despite the writing style of the book, but I'm not sure, if Book 2 is more of the same, that I'll be queuing up for future instalments.
続きを読む
9人のお客様がこれが役に立ったと考えています
違反を報告
レビュー を日本語に翻訳する

Angie Hackett (Stormageddon)
5つ星のうち3.0 Various things going on that irrtated
2017年4月27日に英国でレビュー済み
Amazonで購入
In many ways I didn't know what to make of this book. In other ways I found it to be gripping. It took me a long time to work my way through this book and I'm finding myself left with a mix of irritation, indifference and curiousity. The writing and plot were solid and so were the characters and situations. A lot of the characters were likable but some of what was going on was frustrating. I felt no real connection with this book, the plot of the characters which is probably why I feel indifferent about it. Irritation I guess stems from the fact that I had moments in this book where I felt involved in the book (from a reading perspective) and other times I felt disconnected and not bothered by a lot of what was happening. I guess by the end of this book I'm left with confusion. Part of me wants to read more in the series but part of me isn't sure if I care enough to carry on.
続きを読む
違反を報告
レビュー を日本語に翻訳する

Mike Jones
5つ星のうち1.0 Pap
2015年1月1日に英国でレビュー済み
Amazonで購入
I got this for free. I gave it a chance as a serious end of the world, without the obligatory zombies, which I far more enjoy than the usual, overnight all humans become zombies except for some bloke in a hospital. Anyway this also failed and by chapter 10 I was praying for zombies not some 13 year old girls ridiculous idea of the romantic scrappy end of the world. It was free is the best comment I can make
続きを読む
8人のお客様がこれが役に立ったと考えています
違反を報告
レビュー を日本語に翻訳する

Heather @ Random Redheaded Ramblings
5つ星のうち4.0 Great series
2015年1月7日に英国でレビュー済み
Amazonで購入
My first dystopian read of 2015 and it is a good one!

The first book in the Ending Series, After The Ending is a compelling read, enjoyable from the start all the way through to its thrilling ending.

Now books about the end of the world, viruses, billions dying are by no means a new subject, there are loads of them out there and what I try and look for is something a little different, which can be difficult as there are tons of books that do they same as this book which is people trying to survive in an inhospitable environment banding in to groups for support and defence with a bit of romance added in.

So what makes this book different or at least worth your time?

Well in my opinion, you may be the same, if a book is worth reading you tend to know in the first couple of pages and After The Ending got me hooked in straight away, it is told from the point of view of two best friends Zoe and Dani who are stuck on opposite sides of the country stranded by the virus which has rampaged it way across the country (which country? are you new to this!? America of course!! ( Sorry Americans I love you but if the s**t hits the fan I'm cancelling my holidays to Orlando!!)), these two have grown up together, they are each others lifeline and when they need each other the most the have thousands of miles in between them.

The story is all about the girls desperately trying to get to one another and the obstacles they have to overcome, the major one is what they call the crazies, the people who did not fall prey to the virus they have been left majorly mad, acting strange and very violent but thankfully the girls are not alone as they begin their respective journeys they come across friendly faces who help them, some familiar to them and some not. New friendships are forged and also some not so friendly relationships made.

Surviving and not getting taken out by the crazies is a good part of their day but Zoe and Dani along with their fellow survivors start to feel different, they experience strange things, some of them start to communicate with different creatures, some of them can can calm people down, some can heal quickly, it seems everyone who has not been killed by the virus or driven crazy has a new ability that they need to learn to control.

Now this is part of a series so this story is going to continue for a while (which is good!!) and as this book comes to the end I think you may get an inkling of where this story is going (no spoilers), the characters of Zoe and Dani along with their love interests, friends and furry friends are going to have to come to terms with their new abilities and they are going to have learn to survive, it is not just the crazies out there to worry about.

I really enjoyed this book as I said it reeled me in straight away but a couple of things could have done with more explanation, there is one scene where an old teacher of the girls is discovered still very much alive and a meeting with him and his fellow survivors happens, I would liked to have read about it, it is just briefly mentioned and it would have been nice to have heard about if they met any old faces and what has happened in that community, the other thing was that email seems to stay on for an awful long time after the country goes pear-shaped I struggle to get it hear on a good day and the last thing was just back story on few of the characters but YAY!! there are novellas on the characters in question and I have added them to my wish list along with the next two books in the series.

So all in all if you like a young adult dystopian novel with a hint of romance and danger set in our near future with the prospect of many more books in the series to satisfy your hunger for all things end of the world then this is it, as I mentioned above I need a book to stand out a little to make it worth while in amongst all the other similar stories, this stands out with a well written story, scope for exploration in the characters abilities plus it has the hint of a lot more to come.