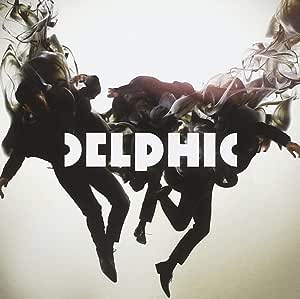 2010 debut from the Manchester quartet. Delphic are Rick Boardman, Matt Cocksedge and James Cook, young men from Manchester who combine guitar, bass and vocals with their laptops and drummer Dan Hadley. Blending bits of New Order-style Indie dancefloor Rock with the Electronic explosion of the Orbital, Delphic take the Klaxons' blueprint and makes it even better. Recorded in Berlin, Acolyte is the sound of the past, the present and the future. Includes the 2009 single 'Counterpoint'.

2010 debut from the Manchester quartet. Delphic are Rick Boardman, Matt Cocksedge and James Cook, young men from Manchester who combine guitar, bass and vocals with their laptops and drummer Dan Hadley. Blending bits of New Order-style Indie dancefloor Rock with the Electronic explosion of The Orbital, Delphic take The Klaxons' blueprint and makes it even better. Recorded in Berlin, Acolyte is the sound of the past, the present and the future. Includes the 2009 single 'Counterpoint'.

Rob
5つ星のうち5.0 Love it
2010年1月15日に英国でレビュー済み
Amazonで購入
I saw Delpich at London Field Day last summer. I heard them and feel in love straight away. I've been waiting for the full album to arrive and now it has. Its just brilliant - buy it. It makes you smile with good vibes every time you listen. Its full of influences too many to mention.
続きを読む
役に立った
フィードバックを送信中...
フィードバックをお寄せいただきありがとうございます。
申し訳ありませんが、お客様の投票の記録に失敗しました。もう一度試してください。
違反を報告
レビュー を日本語に翻訳する
その他の国際レビューを読み込む

Mrs. J. Curtis
5つ星のうち5.0 Delphic's debut album
2010年2月16日に英国でレビュー済み
Amazonで購入
My husband and I first saw Delphic on Jools Holland one Friday night, and he was hooked. We bought Acolyte as soon as it was released and we're now both hooked; it's a truly awsome debut album from an extremely talented band. Listen and prepare to be amazed.
続きを読む
2人のお客様がこれが役に立ったと考えています
役に立った
フィードバックを送信中...
フィードバックをお寄せいただきありがとうございます。
申し訳ありませんが、お客様の投票の記録に失敗しました。もう一度試してください。
違反を報告
レビュー を日本語に翻訳する

Guy Bolton
5つ星のうち5.0 Welcome to 2010
2010年2月24日に英国でレビュー済み
Amazonで購入
This is a fantastic album and refreshingly original. I can hear many influences including New Order, and maybe even The Cure and Ultravox in there, and yet it is completely original and very dance oriented for the new decade. Look out for these guys in next seasons awards as these tracks are rapidly becoming the soundtrack to this years TV ads. If this was vinyl, I'd have played through to the B side by now!
続きを読む
1人のお客様がこれが役に立ったと考えています
役に立った
フィードバックを送信中...
フィードバックをお寄せいただきありがとうございます。
申し訳ありませんが、お客様の投票の記録に失敗しました。もう一度試してください。
違反を報告
レビュー を日本語に翻訳する

Gideon
5つ星のうち4.0 Pythian Calling
2009年12月15日に英国でレビュー済み
Amazonで購入
A new year, a new decade. What could be better than to start it all with some marvellous music?

And here it is, just around the corner. Courtesy of Mancunian indietronic trio Delphic, a young band who have so far released three singles that can be easily defined as classic.

In this little preview we are going to discuss these, so that we will have more time for the bulk of the album (seven tracks) when it arrives in January.

COUNTERPOINT (March 2009) is a six-minute tour de force built on a syncopated rhythm whipped by flickering trance keyboards and shards of post-punk guitar. It sounds like a marriage made in heaven between Technique-era New Order and the first Orbital album, with an atmosphere that is tense and caressing at the same time. The lyrics are short but poignant, singer James Cook desperately repeating "Tell me nothing's wrong, today". And of course there is nothing wrong when tracks are this velvety and ferocious.

THIS MOMENTARY (August 2009) is softer in approach at the start, with liquid guitars and keyboards, a nimble 4/4 rhythm track and a waterfall of vocals drenched in melancholy. Then, halfway through, it all changes into a percussive crescendo that quickly escalates into frenzy. After a dramatic pause the starting motifs and vocals are reprised, leading to a soothing close. Electronic plus Virgin Prunes, anyone?

DOUBT (November 2009) reverts to a syncopated rhythm and displays a kraftwerkery feel (we even believe to have heard a sample from "Sex Objekt" at the start). The lyrics are more articulate, with gasping singing on the verse. Then a soaring synth figure takes us to the brink of a precipice, where the devastating chorus is delivered. All this is repeated twice, before a guitar coda closes the track with scratched, neworderian regret.

This is all we know about Delphic at the moment. But it is already enough to nurture great hopes. Also, do not be put off by the name New Order popping up too often; these people are no inferior imitators. They are simply excellent students, on their way to give their teachers a good run for their money.

See you in Delphi.

"Acolyte" finally with us, we can only state the obvious: the rest of the début album by this Mancunian trio is EXACTLY on a par with the singles above. That is to say: this is a very important and extremely accomplished work, and as such it now deserves a five-star rating.

Of the seven new tracks five are songs, all of them further proof of Delphic's abitity to write intelligent techno-pop with memorable melodies and intriguing, often sombre lyrics. Some of these songs ("Remain", "Halcyon") even display a sound clearly inspired by the classic vocal house that, for a brief moment, was ubiquitous at the end of the 80s. That cannot be a bad thing, as the original, deep spirit of this music has often been overlooked and, to put it frankly, sometimes despised and forgotten.

There is more, though. "Acolyte" also showcases the band's instrumental side via two tracks: "Ephemera" is a short, ghostly piece that comes as a perfect relief after the tour de force of "Counterpoint", the previous song, while the title-track is a nine-minute opus of flowing beats and understated beauty, a magnificent tapestry of restrained yet heartfelt emotion.

Which begs the question: is aspirational pop back in fashion?