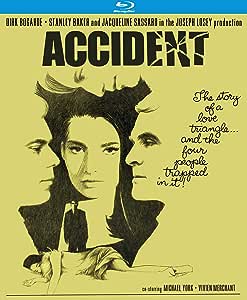 Viva Verdi
5つ星のうち5.0 Confusion above over cast and production credits
2010年12月12日 - (Amazon.com)
How on earth do the Boulting Brothers and John and Hayley Mills, amongst others, get to be included in the credits noted above? They have NOTHING TO DO WITH this brilliant adaptation of Nicholas Mosely's novel, "Accident".

First of all, the screenplay adaptation by British playwright, Harold Pinter (1930-2008), is a brilliant reduction of the dialogue to the most mundane level of non-communcation or miscommunication between the main characters, Oxford don Stephen (Bogard), his wife (Vivien Merchant, at that time, Pinter's wife), Stephen's colleague, Charley (Stanley Baker), and both men's involvement with Anna (Jacqueline Sassard) a student at Oxford who is also involved with Stephen's pupil, William (Michael York). Each line, each glance is loaded with double meaning, as the characters circle around each other.

In visual terms, American expatriate director Joseph Losey (who had previously collaborated with Pinter on "The Servant" - 1963 - and who would go on to a third collaboriation in the 1970 "The Go-Between") brilliantly fills in the details which the dialogue hints at. It's appearance versus reality, what seems and what is, all captured in lovely mid-summer in the English countryside where Stephen's house is located.

Buy it, see it - the Bogart Collection of three films (and with two of the three films mentioned here) is a good buy also.