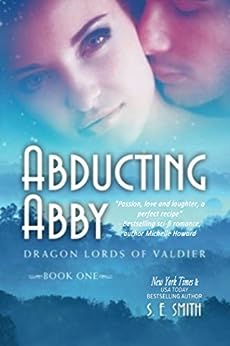 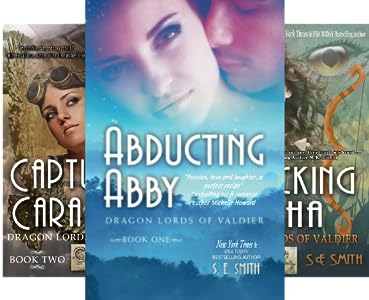 "For lovers of Science Fiction Romance, author SE Smith is an absolute must-read."--Donna McDonald, Bestselling Author of the Forced To Serve series --このテキストは、paperback版に関連付けられています。

S. E. Smith is a New York Times, USA TODAY and #1 International Amazon Bestselling author who has always been a romantic and a dreamer. An avid writer, she has spent years writing, although it has usually been technical papers for college. Now, she spends her days and weekends writing and her nights dreaming up new stories. An affirmed "geek," she spends her days working on computers and other peripherals. She enjoys camping and traveling when she is not out on a date with her favorite romantic guy. --このテキストは、paperback版に関連付けられています。

Moose Girl
5つ星のうち3.0 Good but not great
2016年7月22日に英国でレビュー済み
Amazonで購入
This was probably more of a 3 1/2 stars, but half stars aren't an option. I liked the story but there were several problems.

The writing was a little clunky and didn't flow very well. Too many things were crammed into the book and not enough time spent on any of them. We were rushed from one incident to another without enough depth in each. The characters were a little too shallow, and Abby could be seriously annoying at times. We suddenly had several other women thrown into the story and none of them were introduced very well. I still haven't sorted out which woman is which. I realize that this is setting the book up for a series, one for each brother and his woman, but it all felt a little too confusing and out of place. Parts of the book did make me cringe as they were a bit too cutesy.

Having said that, there is something about the book that I liked. It was a good idea and a charming story. It's a good book, it's just not a great one.
続きを読む
3人のお客様がこれが役に立ったと考えています
違反を報告
レビュー を日本語に翻訳する

Musings of a Middle-aged mum
5つ星のうち4.0 SciFi/Fantasy/Alien Romance
2019年9月6日に英国でレビュー済み
Amazonで購入
Abducting Abby is the first book in the Dragon Lords of Valdier series. A strong, independent woman lives alone on a remote mountain, resistant to the charms of the local sheriff. Suddenly, she comes across an injured man on the mountain and tends to him as he returns to health. The man, however, is an alien and falls in love with his nurse, whom he calls his true mate. Despite a language barrier, she starts to have feelings for him, even while knowing he is soon to return home.

Clearly, this book is a mix of fantasy, sci fi, and romance. There are explicit sex scenes, so not suitable for teens. They are also very male-dominant, so not entirely realistic (as if the rest of the book is...).

I read this book in a day because I couldn't put it down. I liked the writing and it was very easy to read. You do have to suspend some disbelief, as you do for many books in this genre, but the story is gripping and action-packed, not just a soppy romance - the alien who crash landed, was being tortured on a different planet due to being a King, and is still being hunted.

This is the first of 11 books in the series, and I have added the next one to my wishlist. I would like the subsequent books to be focusing on the alien war, the kingdom, the battles etc, however judging by the book titles, they will be focusing on the romance/sex side of things, so though it is now on my wishlist, it won't be one of the first books I buy (when I start buying books again).
続きを読む
違反を報告
レビュー を日本語に翻訳する

Carien
5つ星のうち5.0 Exciting new series
2016年8月11日に英国でレビュー済み
Amazonで購入
It is always nice to discover a new author who makes you want to read until the early hours of the morning. I loved this story and cannot wait to get to the next book.
I am not always an fan of a hero who steamrolls his decisions over the heroine, never knowing/asking for her opinions. In this instance where they couldn't communicate I was initially on the fence but in the end, Abby's PoV helped to forgive Zoran.
I liked the fact that unlike so many other paranormal shifter romances, the dragon and symbiot were given personalities too which made for a better understanding of this hero as a whole.
If you like paranormal shifter romance, this is definitely a series you cannot afford to miss out on.
続きを読む
1人のお客様がこれが役に立ったと考えています
違反を報告
レビュー を日本語に翻訳する

Kindle Customer
5つ星のうち3.0 Nice but with some problems
2016年8月12日に英国でレビュー済み
Amazonで購入
This book is fairly good. It has a good story that runs alone at a fair speed. The characters are reasonable well written and the setting is ok, if a little fanciful. However the author has a tendency to jump from character to character too often and without notice. In more than on page the story flicked from one character to another's perspective and then back to the first, all in three paragraphs. This made following the story a little hard in places. A bit better editing and focusing on just one perspective for a longer period would make this a better book, and get a higher rating.
続きを読む
違反を報告
レビュー を日本語に翻訳する
すべてのレビューを参照します
トップへ戻る
Amazonについて
Amazonでビジネス
Amazonでのお支払い
ヘルプ＆ガイド
日本語ショッピングのための言語を選択します。 日本ショッピングのための国/地域を選択します。
© 1996-2020, Amazon.com, Inc. or its affiliates