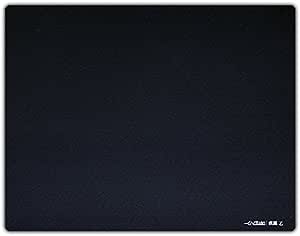 Brian Dlhopolsky
5つ星のうち5.0 Awesome mouse pad
2016年12月8日にアメリカ合衆国でレビュー済み
Amazonで購入
Very nice mouse pad. Love the hybrid nature of the pad, soft so the feet on my mouse don't wear down, but with hard elements to the surface so it glides and responds well. A sort of mix between control and speed type pads. Very tightly woven surface, it does tend to collect dust and I do frequently find myself brushing it off, but can't say keeping it clean has depreciated my experience with it in terms of performance. Only other complaint would be I had to tie up my mouse cable so the braided cable wouldnt brush up against the edge of the pad, might just be me obsessing, but was annoying to hear / feel the braid scraping along the edge. Not a big issue, anyways that's what mouse 'bungies' are for.

Tracks really well, have it tuned with my Logitech G502 using the gaming software, unbelievable difference between the garbage I had been using and this. Biggest difference was probably in Overwatch, I think I used to play at 5050 dpi, with this pad I now play at 2500 or 1600 dpi and it still feels super fast and responsive. The rubber is a nice thickness and soft but firm. I rest my wrist pretty hard while using the mouse, and this pad feels nice while doing so. Pressing your fingers into it almost seems like a neoprene wet suit or memory foam.

I originally was going to go with the MID version after watching a Youtube video about it, but looked at the Artisan website (which is mostly in Japanese) and they placed this one in sort of the middle of these categories they use to describe their pads (e.g. speed, stopping, lift off, etc). Curious how much faster the 'speed' or glide would be compared to this one, which I think is really good, but after using it a while now and getting a feel for what I think is more a control than speed pad, I might be ready to try some true speed type pads (maybe one of those Artisan glass surfaces?).

Dino
5つ星のうち5.0 Great mouse pad
2017年12月29日にアメリカ合衆国でレビュー済み
Amazonで購入
Great mouse pad, but I've come to realize I needed more pad surface, and went with a Cougar Mouse/Pad combo. This pad is great for tracking, I had it paired with a Logitech G502 (Proteus Spectrum), any of the latest optical sensors will read it, but like I mentioned, it was too small for me. They do have larger pads, just make sure to look for the genuine product, which you can find on their website. If Amazon sells it, it should me made by Artisan. I can definitely recommend this product.
続きを読む
役に立った
フィードバックを送信中...
フィードバックをお寄せいただきありがとうございます。
申し訳ありませんが、お客様の投票の記録に失敗しました。もう一度試してください。
違反を報告
レビュー を日本語に翻訳する