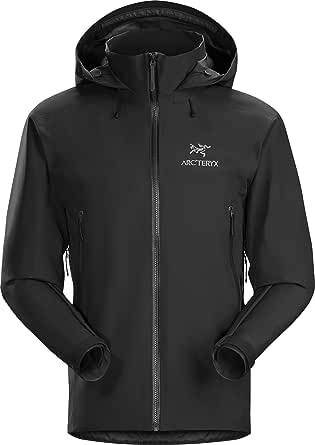 D. King
5つ星のうち3.0 Takes me back to 1997
2019年10月27日に英国でレビュー済み
Amazonで購入
I’ve been hillwalking on an almost weekly basis since 1997, so I’ve had a few jackets in my time. My first, was the Sprayway TL Torridon. I could stand under a waterfall in that jacket and stay dry as it was three-layer Gore-Tex, but it was stiff and noisy, and it lacked breathability. We used to laugh at the noise it made when walking. I had the Sprayway over pants too, and I could sit in a puddle wearing those and remain dry, but again, really stiff and noisy.

Things have vastly improved since 1997 though, for example, my Paramo Helki jacket is light, soft and quiet, and that’s what I want from a jacket. Thus, when the Arc'teryx jacket arrived, I knew instantly that it wasn’t for me, which was a shame because it fit great. And people have been going on about the arms being too longs, what are they on about? The arms are fine. But the stiffness and noisiness of the jacket was a non-starter for me. I showed it to my brother who has been my hillwalking partner from day one, and he too was shocked. We mocked the similarities between the Beta AR and Torridon jackets, and why would anyone want to wear such a noisy jacket these days.

I was a bit disappointed to be honest, because I was going to compare it with my Helki jacket and decide which one to use for the hills and which one to use for street wear. The Paramo is a fantastic jacket and in my view, out-performs Gore-Tex, particularly when exposed to hours of continuous rain. It’s a shame as I really wanted to see how they compared.

To conclude, the Beta AR is a nice jacket: nice colour, good fit, and well-made. But it’s too noisy and too stiff for me. If it were 1997, I’d likely buy the Beta AR instead of the Torridon, but as far as I’m concerned, both of these jackets belong in the past. I returned the jacket.

rmoco
5つ星のうち5.0 AAA - Awesome As Always
2019年7月16日にアメリカ合衆国でレビュー済み
Amazonで購入
This review targets some particulars for those struggling with model & color choice, and assumes you know Arcteryx quality and performance is a 15 out of 10 (which we expect for the price).

Perspective: I'm a walker and hiker, formerly a skier. I'm built like the guy in the video, so am a bullseye for Arcteryx Medium. I've owned a Gamma SV (softshell), a Venta AR (softshell) and a Sidewinder (snow sport shell). My Objective for this purchase: A single jacket for a range of mortal endeavors. A Town jacket for downpours with no umbrella. Rocky Mountain hiking with a day pack, when rain or snow is possible. Pit Zips for hiking heat-dumps. I like weather but want to stay dry and warm.

Fit: "Regular" not "Athletic". Some room is necessary for layering. With city clothes, the Jacket is a bit loose but not baggy. With layers, it's almost-tailored. The length is perfect; it covers my backside and stops. Yes, the sleeves mostly cover my hands but once the cuffs are snugged, the fit is what it should be - room for some reach and wrap.

Color: I chose Ember, dead-center between Red and Orange. I don't get why more strong colors aren't offered. Ember is vibrant but not electric; classy in town, and ensures a tiny carbon footprint for my mountain search-and-rescue!! Frankly, I think half (not all) the techwear colors look dead, anyway.

Crinkling: Sure it does a little, but it's minor. Geek Coefficient of 0. Unless you're into Black Ops, I suppose. And if crinkling bothers you, maybe Softshell then? That stuff's phenomenal; it just won't block a downpour.

Features: GoreTex Pro offers amazing climate control, of course. Zippers are as good as it gets. Pit Zips. My only reservation: Those front Hood drawcords have to be pulled pretty hard to cinch, and full-release is a procedure. But they do get the job done right.

So, Beta AR - All Round, just like it says. A GREAT choice, I think, for broad multi-use! Enjoy!

KBoo
5つ星のうち4.0 Long Sleeve is a deal breaker.
2019年11月21日にアメリカ合衆国でレビュー済み
Amazonで購入
So I bought 3 arcteryx outer shell., Beta AR in large, the Beta AR in medium, and the Beta SL Hybrid in Large. I am 5'8" and weigh around 180lbs (a little Chub).

The Beta AR Jackets are great, good material , regular cut and all, BUT!. I had to return them. Normally I wear a large, but the Beta AR Large runs really large, felt more like an XL. Plus the sleeves are extremely long, more than my own hand in length. I felt like I was smother in a tent.

The Beta AR in medium on the other hand was snug. The sleeves were perfect, but at the max layering, it was tight. Not so tight that it was constrictive, I still could move, it was more of I can wear this for an hour before getting uncomfortable. Also the collar and hood was huge, I felt claustrophobic wearing the Beta AR medium size. Plus it made me look like a giant lollipop.

Surprisingly the Beta SL Hybrid large was a god fit. My only concern was the reviews on delaminating seams and not being super wind resistant and rain resistant. Plus there are no inside pockets for my wallet/phone. It is lightweight and extremely comfortable. It is a slim cut, and it just works really well for me. I did return it, but I am having second thoughts.

On a side note, I chose not to get the Beta Lt cause there are no pit zips on it. The Beta AR has pit zips, and ironically the Beta SL Hybrid also come equip with pit zip. What's the deal Arctereyx?

The Beta AR jackets are more the person needs to fit the jacket and not the jack conforming to the person. It is a good product, unfortunately not for me.
続きを読む
1人のお客様がこれが役に立ったと考えています
役に立った
フィードバックを送信中...
フィードバックをお寄せいただきありがとうございます。
申し訳ありませんが、お客様の投票の記録に失敗しました。もう一度試してください。
違反を報告
レビュー を日本語に翻訳する

madwolfer
5つ星のうち5.0 Perfect
2019年5月23日にアメリカ合衆国でレビュー済み
Amazonで購入
A wonderful shopping experience! The clothes are suitable in size and length, and they fit well. The air permeability of the clothes is really good, very good! Well, it's my umbrella when I'm hiking in the wild!
続きを読む

Amazon Customer
5つ星のうち3.0 Very disappointed
2020年2月19日にアメリカ合衆国でレビュー済み
Amazonで購入
When I received it and wore it, I found the Beta AR of jacket was easily wrinkled. Compared with before Beta AR the new Beta AR was more wrinkled than before, it maybe changed clothing materials or changed to other country to produce it to save cost........ it was not worth the price.
続きを読む
役に立った
フィードバックを送信中...
フィードバックをお寄せいただきありがとうございます。
申し訳ありませんが、お客様の投票の記録に失敗しました。もう一度試してください。
違反を報告
レビュー を日本語に翻訳する