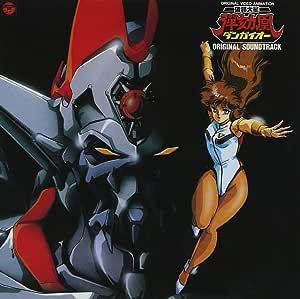 Morph
5つ星のうち4.0 Everything is great except...
2020年2月26日に日本でレビュー済み
Amazonで購入
This is a re-buy of an excellent old album. Everything is great as expected except when you rip the song into your phone, there is simply no info at all, not even the name of individual song which make it hard for identifying on the go. Guess this might be the problem for all old album.
続きを読む
役に立った
コメント 違反を報告
レビュー を日本語に翻訳する

Aurelio Lecis
5つ星のうち5.0 ANIMEX 1200シリーズ(169)破邪大星ダンガイオー 音楽集
2019年6月20日に日本でレビュー済み
Amazonで購入
The CD on one of my favorite anime I've been looking for a long time.
The product was delivered quickly and perfectly intact.

Raisuli the Magnificent
5つ星のうち4.0 Fun anime music.
2019年7月25日にアメリカ合衆国でレビュー済み
Amazonで購入
To be up front, for those of us who have seen the entire Dangaioh series (which I finally have after all these years), this is not the entire soundtrack, but the main musical or orchestrated themes that are used throughout the entire three part series.

It's fun anime music like all anime music that's oriented towards action, adventure, confrontation, high lighted with slower moments of introspection and emotional cool down. I wrote a tongue in cheek anime-mecha piece of fan fiction on some forum because I was inspired by this music, and I think it turned out okay.

Like all anime music it's fairly narrative oriented, and in this sense somewhat one dimensional, but it's otherwise pretty competent stuff that is also stirring. If you know the series and are a fan, then splurge the extra dollars on this CD and give it a listen.

Echo
5つ星のうち4.0 Almost Perfect...
2007年7月27日にアメリカ合衆国でレビュー済み
Amazonで購入
I knew before I bought this soundtrack that there was a high chance a couple of the tracks I was looking for may not be on it. At only 13 tracks, *something* had to be cut. Unfortunately for me, one such track that ended up on the cutting room floor (or, more accurately, probably another compilation that appears to be no longer in print) is the song that plays at the beginning of episode 3 ("I Want Action"). As the title theme and end credits song are both included, I find it odd that this track wasn't also present. Other tracks that I remember well from the series but that seem suspiciously absent are all bgm tracks, like the short piece at the beginning of episode 3 (prior to the song intro), where you see the close-up of Gil Berg's mechanical eye turning; the mournful theme played prominantly in epi 2, especially when Lamba was remembering her past/Oscar was recounting what happened to her home planet; or the music playing at the end of episode 3 when the Team got Dangaioh to 'rise again' to face Gil once last time (my favorite). None of these are on this compilation, and they're sorely missed. While I'm glad to have *any* music from the original Dangaioh series, I really wish this had been more complete background music, and that's why I gave it only 4 stars. If you are a fan of the series, I'd still recommend getting it of course, if only because I imagine this won't be too easy to find in the future, and the tracks included I enjoy very much--just wish there was MORE included from the anime!
続きを読む
1人のお客様がこれが役に立ったと考えています
役に立った
フィードバックを送信中...
フィードバックをお寄せいただきありがとうございます。
申し訳ありませんが、お客様の投票の記録に失敗しました。もう一度試してください。
違反を報告
レビュー を日本語に翻訳する