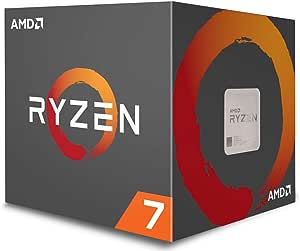 Phan Nhật Luân
5つ星のうち5.0 The one that started it all.
2018年7月8日に日本でレビュー済み
スタイル: 1)CPUのみAmazonで購入
The best of AMD processors of 2017.
If you don't really need super high core speed but still have the urge for hardcore gaming then this is the right processor for you.
続きを読む
3人のお客様がこれが役に立ったと考えています
役に立った
コメント 違反を報告
レビュー を日本語に翻訳する
すべてのレビューを参照します

Simon
5つ星のうち5.0 A nice upgrade - The Ryzen 7 1700 processor
2019年4月29日に英国でレビュー済み
スタイル: 1)CPUのみAmazonで購入
CPU Selection Thoughts
I’ve had my Ryzen 7 1700 processor for about a month now and I love it. After some research I set my sights on the Ryzen processors. I’ve been buying AMD processors for a long while; don’t have the budget for a Threadripper so these were a logical choice. I’m not a big fan of overclocking and I like the lower temperature CPUs like the 1600, 1700, 2600 or 2700 which seem to fit my budget and are very appealing. I chose the 1700 as it was a good price point (at only 147.59 pounds) and I didn’t want to risk not having the latest BIOs shipped on my motherboard (newer processors may require an firmware update and I’m not risking it!).
This system is a vast improvement over my previous Athlon X4 845 with its DDR3 RAM. My ‘upgrade’ felt like a complete overall since it requires new DDR4 RAM and another motherboard with an AM4 socket. Fortunately I can reuse my SSD, HDD, GPU, case and PSU so at least there’s that.

Installing and POSTing
I found installing the Ryzen 1700 easy. The CPU fit nicely into the AM4 slot of my motherboard and the lever lowered perfectly - a very nice feeling. The heatsink and fan fixes to the motherboard using 4 screws which went ok but it uses more force than I expected. Then came the cabling and wire management.
Then it was time. While holding my breath I pressed the power button. To my surprise it POSTed first time – a big sigh of relief. Great it all works - if only the software installation would be so easy.

Final Thoughts
I love this computer build so far. It’s fitting into my ethos of small form factor, very stable, quiet computer without sacrificing the processing punch of a modern CPU. Next on my list is a computer case so my system is not in a full tower and a fast M.2 NVME SSD that should be compatible and hopefully bootable with this motherboard.

Stee
5つ星のうち5.0 Price to Performance at this point (July 2019) Is amazing
2019年7月12日に英国でレビュー済み
スタイル: 1)CPUのみAmazonで購入
If you want a CPU capable of handling any game you throw at it without breaking the bank Ryzen gen1/2 are the way forward at the moment.

The Zen 2 build up and release has lowered these CPU prices to a point that in my opinion could increase PC player base massively due to being able to build a mid range gaming PC for the price of the latest console with slightly better performance (within reason). The 1700 is the only first gen processor worth >£100 in the current climate but at the end of the day >£150 for an 8 core 16 thread processor you cant go wrong.
続きを読む
2人のお客様がこれが役に立ったと考えています
違反を報告
レビュー を日本語に翻訳する

AzBo :)
5つ星のうち5.0 Couldn't be happier
2018年4月19日に英国でレビュー済み
スタイル: 1)CPUのみAmazonで購入
Couldn't be happier, had it for about a year now and today Ryzen 2 is out but i can wait due to this chip being able to handle modern games and rendering, photoshop ETC.

Cant get it over 3.9Ghz on an overclock as it just becomes unstable so i think AMD's max overclock spec they show is correct.

Like i said i can wait and i think this will stand the test of time just like my AMD FX6350 did.
With the price i paid on launch and now with Ryzen 2 coming out and i think there will be a price drop on this chip i can recommend it to everyone as it was a great bang for buck chip on launch and is even more so now.
続きを読む
2人のお客様がこれが役に立ったと考えています
違反を報告
レビュー を日本語に翻訳する

Nathan s
5つ星のうち4.0 Good alrounder.
2019年4月25日に英国でレビュー済み
スタイル: 1)CPUのみAmazonで購入
Fantastic value for money if you're looking for great multithreaded performance. With a easy overclock to 3.8 GHz using ryzen master I managed to get a score of nearly 1700 on cinebench. Installing the CPU itself was easy but the cooler was a bit harder to install this was probably due to the motherboard already being in the case already so I imagine it's designed to be installed outside of the case. The only downfall of this cpu is the single threaded performance so you won't see much of an improvement in gaming with ryzen 7 over ryzen 5. So if you're only gaming I recommend going for ryzen 5 and saving a bit of money.
続きを読む