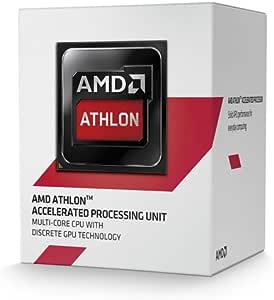 with a dedicated graphics card it can handle any game, even with its own apu graphics its pretty darn good!

You will only need an 80w psu for the whole system of course if you use a dedicated graphics card 450 to 500w is recommended.
The maximum graphics card for this cpu is the nvidia gtx460 anything higher will be a bottleneck. But of course you can overclock these which is something you cant do with the intel j1900 chip on a board solutions.

you can build a totally silent htpc with this, a very nice cpu indeed it never goes above 38 celcius

I still cannot believe this little cpu with built in graphics can run the new tomb raider game at 720p smoothly, how awsome is that! this game is very demanding yet it runs well. it will even run at 1080p if you allocate 2gb of ram to the onboard graphics and lower the textures a little, amazing. Its really not designed for gaming at all but wow just wow. Can only imagine how good the high end apus are.

This little cpu can play 4K video at a maximum bitrate of 20MBPS, however 1080P with 5.1 DTS audio is where it shines, if you are overclocking use the ASMEDIA sata ports not the AMD ones otherwise the drive wont get recognised at boot.

You will see in my other reviews i bought this with a RAJINTEK MATIS case and ASRock motherboard, those two items bring out the best in this platform, totally awsome combination.

omelette
5つ星のうち5.0 Nice processor.
2016年7月18日に英国でレビュー済み
Amazonで購入
Used this to upgrade my 7 year old Zotac HTPC, coupled with a AM1H-ITX motherboard. Despite being 3-4 times faster than my old Intel ProDuo-based laptop at encoding x265 video, which itself was at least twice as fast as the integrated Intel quad-core Atom of the Zotac motherboard, Windoze only gives it a 4.9 rating - just marginally higher than it rated the Zotac! According to PC-Mark, the integrated graphics of the 5350 are between 3-5 times faster than that of the onboard Nvidia graphics of the Zotac - hence my scepticism.

The one thing I'm unhappy about is the thermal readings. I don't know if this is down to the mobo or the 5350, but the readings are often times nonsensical. With an ambient temperature of 18-20degC, I often get readings of 1-5degC!!! Put the CPU under load and the temperature shoots up, maxing out at around 48degC. But within a few seconds of going from Max to min load, the temperature reading will plummet by 20-30degC - the real world doesn't operate like this! To add to the confusion, the motherboard's own BIOS temperature monitoring seems to measure correctly, it's just the half dozen or so applications available for doing this that seem to have problems!

This in no way seems to affect performanace though. I've had a chequered history with AMD CPU's, this being my third Athlon. The other two had serious temperature-related stability problems, crashes being a normal occurrence. But these were of 2002-2004 vintage, so probably not a concern. Given the insanely high max operating temperature of the 5350 (90degC), coupled with the max (apparent!) temperatures of 48degC that I'm seeing, it should not be a problem.

One other point. Although the 5350 has not much overhead as far as overclocking is concerned, a little latitude does exist, but I have failed miserably to exploit it. When I have tried increasing any of frequencies, even marginally, I am left with OS's that will not even boot - so I'm not sure what is going on there! The old Athlon's could be overclocked nearly to oblivion.

But so far, so good. Seems a perfectly adequate processor for a HTPC, capable of playing 720p x265 (HEVC) videos with only 30-40% CPU load, or 1080p x265 @ 60-70%. The Intel quad-core Atom/Zotac/Nvidia setup would choke & die within a few seconds with 720p videos (never mind 1080p), when trying the same thing. The fact that it will encode them as well, and 3-4 times faster than I'm used to, is an added bonus!
続きを読む
1人のお客様がこれが役に立ったと考えています
違反を報告
レビュー を日本語に翻訳する

Long Time Amazon Customer
5つ星のうち5.0 Happy PC!
2016年7月29日に英国でレビュー済み
Amazonで購入
Finally gave up with my Sempron processor and slow harddrive. Although the harddrive upgrade made the biggest difference, there was a very noticeable improvement in the speed of my home build PC with this processor.
The processor comes with a fan and heatsink so i just connected my static band and got to work replacing the old sempron. In all it took less than 15 minutes. Once i restarted the bios needed configuring. I set it to the settings i had previously and confirmed the new cpu settings were as expected. Everything was spoton.
Upon restarting the computer had a couple of glitches whilst it tried to resolve the drivers. It failed to find the graphics driver initially. I restarted the computer and everything was resolved - i had no changes to make and no software to install.
The machine was already noticeably quicker. I loaded several of my most common applications and everything was a lot more responsive.
My estimate is that there is around 30% improvement in the speeds. Everything seems stable and AMD suggested a further driver update, which had no noticeable impact - certainly nothing negative. For the other components, especially my motherboard this best cpu i can use with built in gpu. I wonder if a separate gpu would be much quicker. Finally happy with my build🙂
続きを読む
1人のお客様がこれが役に立ったと考えています
違反を報告
レビュー を日本語に翻訳する

4pound line
5つ星のうち5.0 As Good As The Reviews Say It Is
2016年7月16日に英国でレビュー済み
Amazonで購入
This APU lived up to all the hype. Cheap and low powered/cool running it is ideal for an HTPC build. The full build details are:
Motherboard - ASRock AM1H-ITX
Case - Silverstone SST-ML06B
PSU - Leicke ULL 90watts
SSD - Kingston 120 Gbs
RAM - 4 Gb Kingston HyperX Fury
With the CPU fan speed set to 'Silent' in the BIOS of the motherboard, this set-up is completely silent and the CPU generally reaches 50 - 55 degs C. 1080p video is no problem and plays very smoothly. The O.S. installed is Linux Mint Cinnamon, though on reflexion perhaps the Mate variant might have been a better choice. In addition to use as an HTPC this APU could easily be used as a regular, everyday PC for browsing, emailing, playing videos, doing spreadsheets and other office functions. Compared to the Intel I3 box with 8 Gb RAM I built last year I feel the AMD package offers much better value for money (so long as extreme gaming/video encoding etc are not required).
Edit on 24th May, 2017. I've used this APU for 9 months now in an HTPC set-up and have been completely happy with its performance! Playback/streaming is rock-solid and always smooth with no jerking/tearing that was sometimes suffered with the Raspberry Pi mk1. The 5350 seems to be out of production now, having been superseded by the AMD 5370 but if I ever need to build a new HTCP I will definitely go with the new version.
続きを読む
2人のお客様がこれが役に立ったと考えています
違反を報告
レビュー を日本語に翻訳する

decided to build a small general purpose machine for around the house, I wanted something that would stream HD, encode, burn, surf and be quiet and cheap too run. Enter the world of cpu's and apu's. after weeks of research I thought I would give AMD's recently released AM1 a shot. I got this little 5350 apu and matched it with a Asrock AM1B-ITS board, added 4gb of new ram and I was up and running for under £80. I chucked in a 60gb ssd, 1tb WD hdd and a corsair 430w psu into a coolermaster elite 130 case and hey presto an awesome brand new machine for £225

This little system has left a huge smile on my face, everyone knows for raw computing power i5 & i7s are most popular but to live in the real world where budget boundrys exist this is definetly the way forward. I keep throwing demanding tasks at the this apu and it just powers through.

You cant be robbed buying this apu for under £40 you gain 4 cpu cores and a staggering 128 gpu cores which handle 1080p and 4k nicely.