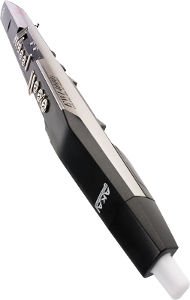 G-Reed
5つ星のうち5.0 EWI SOLO
2020年8月31日に英国でレビュー済み
パターン: EWI Soloタイプ: 単品Amazonで購入
received my ewi solo and plugged it in and it did an update to V1.16 and charged for a couple oh hours. first thing I noticed was its lighter than the ewi5000 and has more of a bend in the neck and it about 3" longer... I tested out using the 13 sax voices on the factory setting and found them all to be good. also the 4 clarinet voices. the jazz clarinet is very good.... what I like most is how its pick up and play... I used a little Bluetooth rec/transmitter in the earphone jack that lets me use my bluetooth headphones with out cables... all in all I think this is the best ewi made so far... not tried more that 20 of the 200 voices but so far not been disappointed when the sounds...
続きを読む
3人のお客様がこれが役に立ったと考えています
違反を報告
レビュー を日本語に翻訳する

Mr. B. Solomons
5つ星のうち5.0 Great fun for a woodwind player, but you need to be a competent musician...
2013年3月7日に英国でレビュー済み
パターン: EWI 4000s 追加音源版タイプ: 単品Amazonで購入
This is a great addition to any woodwind player's set of instruments. It feels very solid and well made, as we have come to expect Akai Professional products to be.

Akai don't do a case for this at all, but if you buy a Ritter Soprano Sax case, it fits in perfectly, without rattling around, and has a pocket for cables, batteries etc, and a strap to sling it over your shoulder with. My son has lugged this all over the place to rehearsals, and the case has done a good job, with no damage so far.

When you consider what you are getting, this is actually a very good value unit. It as a stereo 3.5mm out jack, midi out, 1/4 inch out (he often plays it through a lead guitar amp with effects pedals)

We are very pleased we bought one, now saving up for the Eb clarinet....
続きを読む
5人のお客様がこれが役に立ったと考えています
違反を報告
レビュー を日本語に翻訳する

Walton Mendelson
5つ星のうち4.0 Arguably the best of the current electronic wind instruments
2020年10月26日にアメリカ合衆国でレビュー済み
パターン: EWI Soloタイプ: 単品Amazonで購入
NOTE: The EWI SOLO was introduced August 25, 2020. Most of the reviews here, as of when I posted this note, are for instruments sold well before that date, and are not EWI SOLOs.

There is a difference between early impressions and observations made after much time. However, in the month I have had the EWI SOLO, I’ve practiced over 100+ hours, had four rehearsals and played one gig, and so far I am impressed. If I could apportion stars: 4 for it as a controller (given my style of playing, the mouthpiece is not as responsive as others); 3+ for onboard programs/tones/patches (some are good some are bad; but learning to play some patches takes time, easily more than a month); and 5 for the ability to edit the programs (not as in depth as the VL70-m, better than Roland’s Aerophone Editor).

With regard to the EWI SOLO, my early impressions require some context.

I have been playing Yamaha’s WX5 and WX11 (wind controllers) since they were introduced in the 1990s. Unfortunately due to age, wear and tear, they are dying, and Yamaha stopped making them some years ago. As a backup, I tried Akai’s EWI 5000 in late 2014. It failed within hours: detuning, distorted notes, random programs changing by themselves, notes sustaining when not being played, etc. I had purchased it from Patchman, who had set it up. I assumed it was set up correctly, so, because it uses capacitance switching, I thought it was either me (dry or wet hands, body capacitance, etc.), something environmental (grounding—flooring: concrete, natural/synthetic carpeting, wood, etc.—humidity, temperature, etc.), what I was playing (disjunct vs. conjunct motion, fast vs slow, etc.), or the specific patch. I assumed there was something I could do that would fix the problems. But nothing recommended by Akai or suggestions on forums—Patchman had no suggestions-- i.e. nothing I did, fixed it.

Patchman simply referred me to Akai. Akai replaced it, and the replacement failed in the same way. This time, I had to set it up, so that introduced a new variable. I tried everything I could think of and everything Akai suggested. I kept a journal of what I did, and what might effect things. I tried to work with Akai technical support. In the end, half a year later, Akai had sent me 5 replacement units, and all failed. They said the returned EWIs were fine. Examples of the problems were witnessed, recorded, and in several cases, videod. Despite documented problems both Akai and Patchman maintained the problem was me, “he doesn’t know what he was doing.” Akai claimed the EWI 5000s played perfectly.

In 2019, after quite a few firmware updates and a Bernie Kenerson video which talked about a setting that eliminated random program changes, I bought a new EWI 5000. This was number 7. It failed within hours. Akai was no help. Bernie Kenerson and Ingo Scherzinger of Dynasample.com, tried to help, but nothing eliminated the problems—although, I must commend them for their time, assistance, and expertise.

Three Roland Aerophone AE-10s all failed (detuning, dropped notes, etc.—also recorded). So that’s 10 failures out of 10 instruments. Whereas, I have had 2 WX5s and 4 WX11s, and all have worked for years! (3 died of old age, and 3 I bought used, and they are what I have been performing on for the last few years).

What did these 10 malfunctioning electronic wind instruments have in common? Me and where I live. I do not believe 10 instruments bought over a span of 5 years were coincidentally defective in their manufacture. I do not believe it was me—e.g. I forgot to hit button A or turn off B. If it were something I was doing or not doing, someone should have said what: no one did.

My theory is that altitude (I’m at 5200+ feet) causes or exacerbates design or manufacturing flaws in the EWI 5000 and AE10. The transducer (the device that converts air pressure changes from the mouthpiece to electrical signals) is probably vented (although, I don’t know because I have not seen it, in either instrument, nor has anyone commented about this). The nuances that it responds to (pressure, air speed, embouchure, throat and tongue positions) are remarkable and subtle. I hypothesize that there is a difference between venting at sea level (101kPa) and venting at a mile in altitude (83 kPa), which causes problems with the output signal—perhaps this could be called aliasing.

I still need a either a new backup, or a new instrument to perform with. The EWI SOLO is a redesigned and retooled instrument, which also has new firmware. And that is why I purchased it.

KEYWORK: The key sensitivity is somewhat erratic compared to the EWI 5000. This may be a setting issue (key delay and sensitivity), this particular instrument, or it may be me—120 hours is not much time to develop muscle memory.

It is fast and easy to be sloppy. You have to be attentive to not accidentally touch keys (mostly the accidental keys--a fitting name!), which will raise or lower the pitch.

PITCHBEND PLATE: It does not have a pitchbend up plate, as the EWI 5000 does.

PATCHES/SOUNDS: The onboard acoustic instrument patches are, to my ear, not as good as the comparable patches on the Yamaha VL70-m and the DynaSample Xpresso, and are the same as the EWI 5000, but with 100 more synth sounds. However, the other members of one group I play with thought the sounds are “richer.” Bernie Kenerson’s adjustments (for the EWI 5000), available through his website, in conjunction with the EWI SOLO editor are good tweaks, and may be better once/if he has revised them for the EWI SOLO. I’ve been using it both as a controller with both the VL70m and the Xpresso, and as a stand-alone system.

CONTROLS: As for the onboard controls: The various buttons (FX, Global, Programs, etc.) are directly accessible without removing a cover; and the display window with the “encoder” (a dial that also pushes in to confirm settings) is great and, it uses whole words not abbreviations! Breaking the saved programs into 4 banks of 25 makes accessing them much easier.

MIDI CONTROLLER: The EWI SOLO is set up for a USB MIDI connection. It functions well with MIDI 5-pin DIN using a USB MIDI Host (not to be confused with an inexpensive USB MIDI to 5-pin DIN adapter).

DEFAULT: You can reset either the entire instrument to the factory defaults or everything but the favorite banks! This can be done on the instrument or inside the EWI SOLO Editor.

SPEAKER: The speaker is not good; but for some practicing or rehearsals where you can’t be loud, it’s great feature.

CASE: The EWI SOLO will not fit a soprano (or similar) case. An expandable document/drafting/drawing tube, approx. 4 1/4 " X 30-45 (this is the general size listed), makes a good case. Cut up an old yoga mat to line the tube for extra protection. If there is a strap, move the upper connection to the body of the tube, not the lid—if the lid is not secure, it won’t inadvertently come off, flipping the EWI to the ground.
続きを読む
7人のお客様がこれが役に立ったと考えています
違反を報告
レビュー を日本語に翻訳する

Veronica Lakewood
5つ星のうち4.0 The instruction manual is pretty awful . - no sound had to dink around with the settings .
2019年5月15日にアメリカ合衆国でレビュー済み
パターン: EWI 4000s 追加音源版タイプ: 単品Amazonで購入
I got mine today . No sound . Messed around with volumes , watched videos , read instruction manuals . NO SOUND. Had to dink around with the settings . Got Volume but it’s not good for people who have had some breathing issues - so making the settings adjustment worked . I use light reads on my two other wood winds and on this , it this took some tweaking to get close to the simulating light reeds . Also it takes some getting used to to get the octave switch over using the rollers . I practiced with the instrument for about 5hours . I believe if I spend a month practicing every other day I can master it , Smooth transition between the octaves is my current issue . Connected it to my yamaha 88 key and it midis quite nicely . I have the the MAudio midi controller for my panel pc and will link it up with that soon . Not entirely happy with this purchase ...better instructions would help .
続きを読む
3人のお客様がこれが役に立ったと考えています
違反を報告
レビュー を日本語に翻訳する
すべてのレビューを参照します
同様の商品をご覧になりませんか？ こちらのリンクで参照ください。レビュー高評価商品シンセサイザー
Amazonプライム会員ならお急ぎ便、日時指定便が使い放題
さらに、映画もTV番組も見放題。200万曲が聴き放題 。クラウドに好きなだけ写真も保存可能。
> プライムを無料で試す