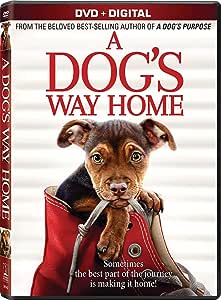 Now the bad: The movie is disturbing on many levels. For every cute scene of a puppy chewing up a shoe, you get a dead homeless guy or a token minority supporting character bringing up the race card (but for animals). This movie tries to tackle serious social issues like veteran's mental health, homelessness, and normalization of homosexuality, but it does so entirely superficially. And, before we forget, it tries to do this in a kid's movie!!! What results is a morbid, depressing, skewed view of the world that upsets kids and parents alike. Homeward Bound this is not.

This movie is seriously disturbing to kids. At the theater, the little girl in front of me burst out sobbing almost every five to ten minutes! That is not exaggeration; it's easy to see why she cried. A puppy is forcibly separated from its mother. A greedy developer tries to demolish a building filled with animals. Bella is forcibly removed by aninal control. A mountain lion is shot and killed, leaving an orphaned cub. A skier gets swallowed up by an avalanche, and one half of a gay couple attempts to steal his dogs as he is hospitalized. But plot twist: the injured skier turns out to despise the dog that loves him and refuses to take back the dog. Later, a homeless vet chains up Bella then dies, leaving Bella to suffer the same fate until two kids stumble upon her and the vet's corpse.

The movie also presents a disturbingly skewed portrait of veterans that seems to be based entirely on stereotypes. The movie prominently features veterans such as Bella's "mom," who are portrayed as broken, helpless, and depressed. These stock characters exhibit no growth or development despite the multiple years spanning Bella's odyssey. The sole well-functioning veteran is the police captain, who appears at the very (groan-inducing) end of the movie. Such a shallow portrayal of the veterans raises questions about why the filmmakers chose to include (and so prominently feature) the veteran theme at all.

There's lot's of additional nitpicks (both narrative and stylistic) that I won't get into. Suffice it to say that this is no Homeward Bound, and don't expect a harmeless, heart-warming tale about a talking dog. This movie can be upsetting, especially for a tot or pre-schooler and for their parents as well.

Sevena
5つ星のうち5.0 Great movie
2019年4月11日 - (Amazon.com)
Amazonで購入
Great movie. It brings awareness on a variety of topics not just for kids but adults too. Topics such as veteran hardships, homelessness, “dangerous breed” laws, etc. If you want to sugar coat real life for your kids then maybe this movie isn’t for you. There are no major racial issues that some have suggested. The only one I could Jedi mind trick (from one line) would be, some people’s unreasonable fear of pit bulls like some people’s unreasonable fear of black people. Or any other race some people say are bad because they exist. If you are worrying about having talking to your kids about the gay couple, then don’t even sweat it. They unrealistically don’t even touch each other. The computer generated animals were not that great but good enough for a kids movie. The movie is heartfelt tear jerker as you expect. Can’t wait to watch the next one in the series, A Dog's Journey.

I am glad they used a pit bull. They are a loving breed, one of their nicknames is the nanny dog. Laws that target “dangerous breeds” are just symptom and fear mongering. Bad dogs are the symptom of poor breeding (ignoring temperament and health issues), uneducated owners, or selfish people.
続きを読む
31人のお客様がこれが役に立ったと考えています
レビュー を日本語に翻訳する

In “A Dog’s Way Home” a Pitbull puppy is rescued from abandonment and adopted by Lucas, an earnest young Denver medical student who interns at the local VA hospital. Lucas names his puppy Bella.

Also the primary caregiver for his disabled veteran mom, Lucas soon runs into trouble with the villainous local animal control enforcer: It seems that Denver has an antiquated law on the books which prohibits Pitbulls within the city limits. Lucas and his mom have angered a local real estate developer, and in retribution he intends to make sure the law is enforced. The intern and his mother live in a place which prohibits pets anyway.

So with the assistance of his friend Olivia, a fellow med student and budding romantic interest, Lucas finds a temporary home for his growing dog with friends in Farmington, New Mexico. Bella will remain in Farmington, some 400 miles away, while Lucas and his mom locate more Pitbull-friendly alternative housing in Golden, Colorado.

Unfortunately, Bella thinks the temporary relocation to New Mexico is a big game, a variation of “Go Home,” a favorite of Lucas. So at the first opportunity, Bella escapes his interim Farmington residence and begins an arduous 400-mile, two-year odyssey across the mountains and wilderness to return to his home with Lucas and his mom in Denver.

Based on humorist W. Bruce Cameron’s 2017 novel of the same name and adapted to the screen by Cathryn Michon and Cameron himself, “A Dog’s Way Home” turns out to be a wonderfully effective little family film which aims straight for the viewer’s tear ducts and scores a bullseye.

The picture is reminiscent of the live action pictures produced by the Walt Disney studios during the 1950s and 1960s, specifically the similar “The Incredible Journey” from 1963. But unlike the Disney films of yesteryear, “A Dog’s Way Home” is reflective of modern sensibilities, pointedly PC, and does not shy away from depicting heartache and even tragedy.

Among the cast of humans, Jonah Hauer-King and Alexandra Shipp are earnest and effective as Lucas and Olivia, while the top-billed Ashley Judd is appropriately vulnerable but resilient as Terri, Lucas’ emotionally-wounded Army veteran mom. An almost unrecognizable Edward James Olmos turns up during Bella’s journey as a disabled veteran who’s not quite as fortunate as Terri. Wes Studi appears late in the picture as a sympathetic Denver police captain. And actress Bryce Dallas Howard narrates the film in her best Once Upon A Time voice.

“A Dog’s Way Home” was directed with sensitivity and obvious affection by Charles Martin Smith, a former actor who appeared during another generation as the hapless Terry in George Lucas’ classic 1973 pre-”Star Wars” picture “American Graffiti” and also, appropriately, starred in Disney’s “Never Cry Wolf” from 1983 as the biologist who journeys into the wilderness to study the animal population.

Photographed beautifully by Peter Menzies, Jr. and containing an evocative music score reminiscent of Elmer Bernstein’s sentimental melodies for 1962’s “To Kill a Mockingbird,” “A Dog’s Way Home” is receiving strong support from the critics, scoring an approval rating of 60% from Rotten Tomatoes and 50% from Metacritic. CinemaScore audiences award the picture a grade of A-minus.

Produced on a modest budget of $18 million, distributors Columbia Pictures and parent company Sony were undoubtedly inspired to make “A Dog’s Way Home” by the remarkable success of rival Universal’s 2017 Cameron adaptation “A Dog’s Purpose,” which earned some $204 million in revenues on an investment of $22 million. The Columbia picture’s off to a good start, earning $11.3 million during its debut weekend, enough to score a third-place finish in the box office Top Ten behind the new comedy “The Upside” and the returning blockbuster “Aquaman.”

Sara
5つ星のうち5.0 Amazing dog's instincts! Go home!
2019年3月30日 - (Amazon.com)
Amazonで購入
I love this movie! I saw it twice at the theater! Couldn't wait for the DVD and video to be available! The voice of the dog is so cute! And the writer gave this darling dog such great lines! I love the action between the dog and most of the others in the film! It is going to be one of my go to movies!
続きを読む
26人のお客様がこれが役に立ったと考えています
レビュー を日本語に翻訳する
Amazon.comのカスタマーレビューを見る(705) 5つ星のうち4.5
Amazonプライム会員ならお急ぎ便、日時指定便が使い放題
さらに、映画もTV番組も見放題。200万曲が聴き放題 。クラウドに好きなだけ写真も保存可能。
> プライムを無料で試す