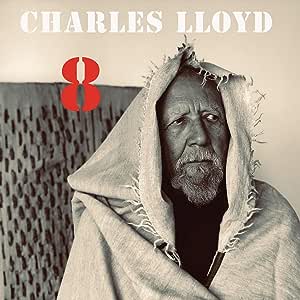 Peter Loosley
5つ星のうち4.0 Don't Shoot Me I'm The Piano Player
2020年3月29日に英国でレビュー済み
Amazonで購入
Wonderful music, but I agree with other reviewers that it's a bit steep to be expected to shell out £180 for the special edition which includes the second half of the concert. And particularly unfortunate is that, in my copy, pianist Gerald Clayton is omitted in the band listing on p6 of the CD/DVD only booklet. Pretty shabby really, especially given his outstanding performance.
PL.

Dr. Tim Parker
5つ星のうち5.0 A great concert recording with a ton of extras in a limited edition box set.
2020年3月16日にカナダでレビュー済み
Amazonで購入
To celebrate Charles Lloyd's 80th birthday two years ago, his wife threw him a party to end all parties. She made him get out on the road and tour! One of the stops on the tour was in Santa Barbara, at the Lobero Theatre, which Lloyd has played in many times. This time the concert was recorded and has been released on multiple formats. There's a condensed set (the first half of the concert, basically) of one CD or two LPs, and there's a complete concert recording of two CDs or three LPs, plus a DVD and a beautiful 96-page hardbound book in a large box. The latter is a limited edition, apparently. As part of the limited edition run, you get two photos, one signed by Lloyd!

There's a lot of music here. The work opens with the 21-minute "Dream Weaver" and continues through many other tracks. This is typical Lloyd, played superbly by him and the group. The engineering is top-notch: the LPs and CDs sound warm and intimate, without being too close, and they have great dynamic and frequency range. Most people will likely listen to the CDs for the convenience factor, and the LP for the "entire" experience. I listen to both, settling in to the LPs for extended sessions, and the CDs for quicker sampling. There's little audible difference between the formats.

This is a fantastic box if you like Lloyd's music, and a nice introduction to it if you're not that familiar. Blue Note has done a great job on the box and contents, and it's a fitting tribute to Lloyd and his band and his music. I enjoyed listening through many times, and can recommend the limited edition set to those who want LP and CD formats, even though this is not a cheap box set by any means. Worth it, though!

Dr. Debra Jan Bibel
5つ星のうち5.0 The Desert Mystic Musican's Milestone
2020年3月5日にアメリカ合衆国でレビュー済み
Amazonで購入
Charles Lloyd in the cover photo to his album "8" appears as if a hooded Berber in southern Morocco, a desert musical mystic. Celebrating his 80th birthday, this live concert in Santa Barbara is presented as a two-disc (CD and DVD) hard-bound booklet, filled with black-and-white photos of the band, which includes drummer Eric Harland, bassist Reuben Rogers, pianist Gerald Clayton, and guitarist Julian Lage, and scenes from the past, including Lloyd's first gig, the Rhythm Bombers, his high school band. Four works only are presented for extended improvisations and offer retrospection. Dream Weaver aptly is a 21-minute stream-of-consciousness [or subconsciousness] flow; the work first appeared in 1966. Requiem is expanded from the 1992 Notes from Big Sur and 1998 Voice in The Night albums to an even more thoughtful, soulful rendition. Elders take stock on milestone birthdays, and at 80 Lloyd pushes the band into moving performances. The traditional Mexican work La Llorona, the weeping woman of folklore, introduced in 2016 on a studio album with The Marvels, is now appreciated live and 3 minutes longer. Part 5. Ruminations [not a selection from the full concert but the title of his 2017 piece from Passin' Thru] concludes the album; it is wide open exploration for all the musicians, sometimes spacey, sometimes focused. Lloyd plays flute; Harland has a long solo.

As for the DVD ,the four-corner split screen of double image reversals, which occurs far too often, is distracting. The out-of-focus effect is also silly, as the constant shifting of direction. Still, it is good to see the band as well as hear them. Together, the album booklet is a fine statement of Lloyd's art reaching this venerable age.
続きを読む
3人のお客様がこれが役に立ったと考えています
役に立った
フィードバックを送信中...
フィードバックをお寄せいただきありがとうございます。
申し訳ありませんが、お客様の投票の記録に失敗しました。もう一度試してください。
違反を報告
レビュー を日本語に翻訳する

Mikio Miyaki
5つ星のうち5.0 refresh memory of seeing them
2020年3月17日にアメリカ合衆国でレビュー済み
Amazonで購入
“8:Kindred Spirits” becomes a good opportunity to refresh my memory of listening their live performance. The last year, the same band played at Tokyo Jazz. They opened the stage with “Dream Weaver,” like this album. Though Julian Lage and Gerald Clayton are new to this band, Reuben Rogers and Eric Harland have been playing with Lloyd since 2007. The band gets complete control over this song. When Lloyd performed at the Blue Note Tokyo with Jason Moran in 2013, their opening number was also this first Atlantic number. At Tokyo Jazz, Lloyd retitled “Requiem” as “Requiem For Koyama Kiyoshi-san,” dedicating the late famous editor of Japanese Jazz Magazine. Lloyd’s sound is pure and dark, and the music is expressive, reflective, and poignant. “La Llorona” was introduced in “Mirror” for the first time, and picked up again for “I Long To See You.” Clayton’s piano here is sad, sweet, and touching. The band jelled for “Part 5, Ruminations,” Lloyd’s improvisation morph like musical ectoplasm while bandmates maintain focus and continuity. They erupt and flow over a clearly delineated soundscape with affection and even with enlightenment. An inserted photo-book is an appropriate quick overview of this birthday concert and his more than 50 years’ career.
続きを読む
1人のお客様がこれが役に立ったと考えています
役に立った
フィードバックを送信中...
フィードバックをお寄せいただきありがとうございます。
申し訳ありませんが、お客様の投票の記録に失敗しました。もう一度試してください。
違反を報告
レビュー を日本語に翻訳する
その他の国際レビューを読み込む