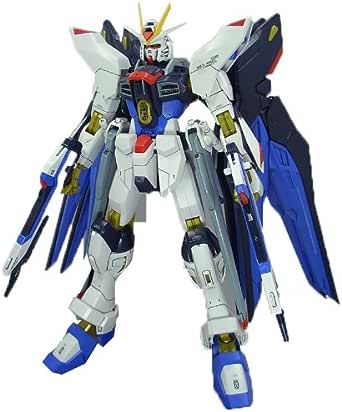 AG/x
5つ星のうち5.0 Best Choice Ever
2020年10月19日にアメリカ合衆国でレビュー済み
Amazonで購入
(10/2020) Been a long time since I bought this, but I may get oit again. Made a School Video Project out of it! Ths is an AWESOME Kit & I would recommend it in a heart beat! Like I said, I may just get a newer one end of ths year to update my Gunam Collection & use LED's ths time.
続きを読む
違反を報告
レビュー を日本語に翻訳する

OdoKai
5つ星のうち5.0 made my day, happy birthday for me
2017年1月20日にアメリカ合衆国でレビュー済み
Amazonで購入
perfect just as listed and arrived for my birthday; actually days maybe weeks earlier than expected. It was a great surprise made my day . Thank you . and I will certainly being doing business with them again.
続きを読む

5つ星のうち5.0 made my day, happy birthday for me
2017年1月20日にアメリカ合衆国でレビュー済み
perfect just as listed and arrived for my birthday; actually days maybe weeks earlier than expected. It was a great surprise made my day . Thank you . and I will certainly being doing business with them again.
このレビューの画像

Joshua
5つ星のうち4.0 Strike Freedom In Action
2010年8月3日にアメリカ合衆国でレビュー済み
Amazonで購入
This is a wonderful model of what is one of the most impressive Gundams ever built. It has a great deal of joint articulation, and interchangeable parts (shields, guns, hands). Not to mention it has built in lights. So when it's late, you can flip the switch and it will light up in true majesty!
続きを読む
違反を報告
レビュー を日本語に翻訳する

FenixFallen
5つ星のうち3.0 1/60 Strike Freedom Lightning Edition
2010年6月30日にアメリカ合衆国でレビュー済み
Amazonで購入
I had just gotten back into Gundam models about a half a year ago, and I started with the Perfect Grade Strike Gundam. so when I say that I was overall unsatisfied with the 1/60 Strike Freedom, it may come from a slight bias to the detail of the Perfect Grades. I got the Strike Freedom in the 1/60 form so that it could match up to my other 1/60s on my shelf, but after getting it and getting a feel for the parts, it just doesn't compare to PGs.

The model has only a partial inner frame, where the lighting wires and LEDs go through. there is no detail on this inner frame, but you could probably take the armor off if you wanted. the lighting effect itself is sort of cool, but a big downside is that the light in the head is separate from the rest of the body. the power for the body lights comes from the stand. the pose-ability isn't too bad, the joints feel stiff though and you will be afraid to really wrench on them for fear of ripping out your wiring job.

the wings are pretty huge, and as far as weight goes they weigh about as much as the rest of the model. they also feel pretty chintzy, and one of the circular pieces of the plastic that holds the wings to the backpack actually broke, along with the peg that was supposed to keep it stationary. it was a real pain to get the wing back apart to repair this, so I would suggest gluing it in from the start, for anyone else who builds this model. it's a little gold circular piece that goes in between the 2 pieces of plastic making up each of the 4 wings. if you glue it in it will save you a lot of hassle later. the dragoons do come off, but they're pretty boring by themselves.

the model doesn't have a ton of panel lines, but the dragoons would definitely benefit from some added detail.

overall I can't give this model much more than a 3 star rating, because I didn't feel satisfied after building it, and I am not convinced it was worth the money paid for it. I have since gone out and bought the MG 1/100 Strike Freedom Full Burst Mode, and I look forward to building that. it has much more detail, and it costs less.