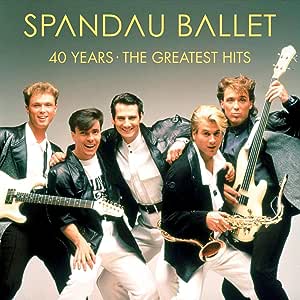 Three CDs. 40 Years: The Greatest Hits features the band's biggest hits and a previously unheard version of the Simon & Garfunkel classic 'The Boxer' recorded in 1990 with legendary producer, arranger and film composer Michael Kamen. Also includes a CD of 12" remixes.

J. Milner
5つ星のうち3.0 It’s those 2010 remasters again!
2020年11月28日に英国でレビュー済み
Amazonで購入
There’s never been a shortage of Spandau compilations and my main hope when buying this one was that they would finally use decent audio versions and not the infamously atrocious remasters carried out under EMI’s watch back in 2010. Alas, this was not to be. To Cut A Long Story Short kicks off the album and is quite possibly the absolute low point. Thoroughly unpleasant and quite painful to listen to. It doesn’t get a lot better although the tracks from the later albums fared a little better.
Yes, it’s cheap. That’s a positive. It’s in a classic ‘Fat box’ too. I quite like that. Beats flimsy cardboard packaging any day. Sadly, there’s no other positive words I can say. We know the music industry doesn’t care about back catalogue (too busy promoting the no-talent dross that masquerades as modern music) and this release just shouts ‘thrown together to mark yet another seemingly pointless anniversary’. No expense spent, dig out the worst sounding masters, stick in a rubbish booklet and put it in a fat box to make it look better than it is.
How sad that a compilation from 2020 sounds inferior to one released in the early 90s. Isn’t technology wonderful! How I wish I didn’t care.
My advice, don’t bother. Buy an electric can opener instead. It’s about the same price and it sounds a heck of a lot better than this.

soul boy
5つ星のうち3.0 40 years and this is what we get
2020年12月1日に英国でレビュー済み
Amazonで購入
Firstly I’m a big spandau fan, but this compilation could have been so much better ( look at omds souvenir) . This could have been a great box set with complete live dvds in it a nice book to read etc . But what we get once again is another greatest hits with this time only one unheard track the boxer can see why it was shelved as its really not a good version , great for Simon and Garfunkel but not these boys . The music is good but surely enough of the greatest hits packages and get back together and give us fans what we really want a whole album of new material, or a decent 40th anniversary box set
続きを読む
違反を報告
レビュー を日本語に翻訳する

Adrenachrome
5つ星のうち5.0 Luck has left me standing so tall…
2020年11月28日に英国でレビュー済み
Amazonで購入
Already have most of the original vinyls. This seemed a good comprehensive greatest hits collection, but I am always worried about the mastering on some of the recent released hitting the market, many are overblown and ruined....I needn't have worried with this release.

On first listen through it is done really well and sounds great. Beautiful red vinyl too.

Arrived on day of release.