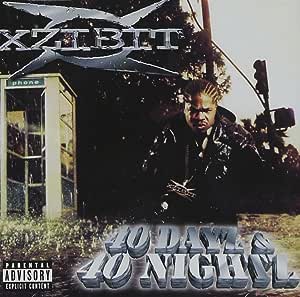 AG
5つ星のうち5.0 Xzibit Solidifies Himself As One Of Hip-Hop's Best...
2002年6月26日 - (Amazon.com)
形式: CD
Xzibit's debut "At The Speed of Life" was a pleasing and solid album from the rough and rugged west coast emcee. His sophomore album does the same as Xzibit brings another great album that displays Xzibits lyrical talents to the fullest.
The album starts with a great intro with TV clips for a court case (maybe Rodney King, it's kept anonymous) that is going to cause a riot, then you are immediately thrown into "Chamber Music". This song has an insanely rugged beat and Xzibit takes no prisoners. He raps some of the albums best lines:
"Clarify, you don't work you don't eat, I repeat
You don't eat you get weak, catch a fragile physique
Accomplish more in one day, than you can do in a week
The X-Man, Wolverine, one swing to make the cut clean".
"3 Card Molly" features Saafir and Ras Kass and is a solid song. It's the type of song that will build up your anticipation for the Golden State (their group) album hopefully released soon. "What U See Is What U Get" has a funky beat. "Handle Your Business" sports a nice mixture of intruments, especially the strings, while Xzibit and Defari use it well. "Shroomz" is a funny storytelling song from Xzibit. It uses a beat that a lot of other artists have used similar versions of since (DMX - Bug Out). "Focus" is a great song, solid lyrics and beat. "Deeper" has a great string beat, something that Xzibit sounds really good over. "Los Angeles Times" has a nice Mel-Man (Dr. Dre protege) beat, with Xzibit exposing the downsides of L.A. "Inside Job" is a great storytelling song. Reminiscent of Ice Cube's songs like "My Summer Vacation" or "Once Upon A Time In The Projects".
This album didn't have a single song garner industry praise as his first album did in "Paparazzi", but it is consistent throughout. The album never slows up, or drops off. And thankfully Xzibit has dropped using Hurricane G like he did on his first album. I recommend this album to anyone interest in a solid west-coast emcee who breaks the stereotype as he has a rough style mixed with great lyrics. If you haven't purchased any Xzibit CD's yet I'd say "At The Speed of Life" is the best, while "Restless" has the best overall mainstream appeal, and "40 Dayz & 40 Nights" is his most rugged album.