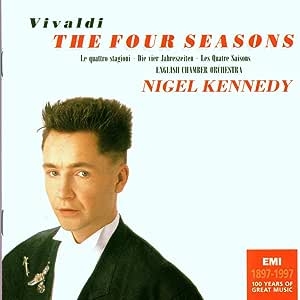 What is left to be said, musically, about a work that features on around a hundred recordings in the current UK catalogue alone? In explaining that he has not been "seduced" by the "authentic" movement, Kennedy notes, "In my opinion, if a piece of music belongs only to the time in which it was written, it should not be played today". Thus his approach draws on the entire tradition of violin playing: "Once I've established an instinctive relationship with the music, I need to use every technique I know to communicate that to the listener". Communicate Nigel Kennedy certainly does, bringing a fresh eye to a work over-familiarity has consigned to background music. His "Adagio Molto" from Concerto No. 3 opens with an extraordinary spectral bowing effect, while the following "Allegro" has a zestful percussive snap. His tempos are faster, his rhythms more accentuated and dynamic, his playing more vigorous and involved than we are used to. The effect is startling and exhilarating, making this a Four Seasons to be listened to. Putting the solo instrument once more to the fore, Nigel Kennedy has done us a great service, reminding us that these truly are fine concertos, bringing this vibrant music once more to our attention. --Gary S. Dalkin

Louise the book worm
5つ星のうち5.0 Vivaldi brought to exciting, brilliant life
2013年6月25日に英国でレビュー済み
Amazonで購入
Having worn out the vinyl version many years ago, I don't even own this any more - but it lives on in my head, as fresh, powerful, spiky and exciting as it was when I heard it in 1989. This album rekindled my fading interest in classical music, and to this day when I hear Four Seasons movements on the radio, I find it remarkably easy to single out his version from the sleep-inducing alternatives.

It's not musical memory so much as sense memory: it's how the playing makes me feel that tells me it's Kennedy. I neither know nor care about Kennedy the self-publicist - to me it was always the worst snobbery of the classical music world that assertive publicity was considered 'vulgar'. Why exactly should classical musicians don that black evening dress and disappear into the music, be subsumed by it? I like this version precisely because he doesn't disappear into the music. I simply can't believe Vivaldi wrote that spine-tinglingly virtuoso violin music for any but but the greatest of show-off musicians, and in Kennedy he has what I think he wrote for: Kennedy's Stradivarius, and Kennedy's enthusiasm, talent and ego, making something explosively strong and memorable.

I'm going to go and buy it again, not because I need to remember it, but just to show continued support for a world-class classical musician and his exciting (and continuing) pushing of the envelope, to the horror of purists.

P. Colston
5つ星のうち5.0 Fantastic
2015年1月12日に英国でレビュー済み
Amazonで購入
I own a version of Vivaldi's 'The Four Seasons' by a well known Philharmonic Orchestra, and there is just no comparison between it and Nigel Kennedy's version. His playing is in a class of its own.
続きを読む
1人のお客様がこれが役に立ったと考えています
役に立った
フィードバックを送信中...
フィードバックをお寄せいただきありがとうございます。
申し訳ありませんが、お客様の投票の記録に失敗しました。もう一度試してください。
違反を報告
レビュー を日本語に翻訳する