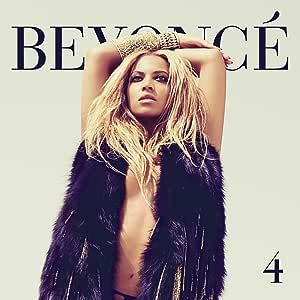 2011 from the R&B superstar. Inspired by a diverse range of influences, from Fela Kuti to Debarge to Adele, this fourth full length solo release is her most diverse yet. The 60+ songs recorded for the album have been whittled down to the 12 that make up 4. This collection of very personal tracks reveals an artist who is unafraid to take chances. Features the single "Run the World (Girls)",

ヤマムラ
5つ星のうち1.0 DISAPPOINTED
2020年2月12日に日本でレビュー済み
Amazonで購入
Unfortunately, the product arrived broken
I ordered two CDs, one of them came in perfect condition and the other arrived with a broken cover, which left me very disappointed
I still haven't removed it from the plastic, because I would like to know if it would be possible to exchange it for a new one :c

5つ星のうち1.0 DISAPPOINTED
ユーザー名: ヤマムラ、日付: 2020年2月12日
Unfortunately, the product arrived broken
I ordered two CDs, one of them came in perfect condition and the other arrived with a broken cover, which left me very disappointed
I still haven't removed it from the plastic, because I would like to know if it would be possible to exchange it for a new one :c

Mrs M
5つ星のうち5.0 Her best yet
2016年7月3日に英国でレビュー済み
Amazonで購入
This was a great album for a girls party in the garden, I think this is my favourite album of Beyoncé's. Great to dance to and my daughter managed to sneak this away for her own use.
4 is the fourth studio album by American singer Beyoncé, released on June 24, 2011, by Parkwood Entertainment and Columbia Records. Following a career hiatus that reignited her creativity, Beyoncé was inspired to create a record with a basis in traditional rhythm and blues that stood apart from contemporary popular music. Her collaborations with songwriters and record producers The-Dream, Tricky Stewart, and Shea Taylor produced a mellower tone, developing diverse vocal styles and influences from funk, hip hop, and soul.

Pablo
5つ星のうち5.0 Queen Bee!
2016年3月17日に英国でレビュー済み
Amazonで購入
If you can't beat Beyonce, then you should join her!
This album is probably one of her best. A new and improved sound, before the release of her most current, visual album.

The disc was unused and in perfect condition. The case was intact and no cracks or anything.

Still to this day, the CD works perfectly and hasnt caused any problems.

Definitely worth purchasing from this retailer at this price as most places don't match.
続きを読む
違反を報告
レビュー を日本語に翻訳する

misselvis
5つ星のうち3.0 C+ could be better
2011年7月23日に英国でレビュー済み
Amazonで購入
Must say I do love Beyonce she is the ultimate performer and business women and is inspirational in the music world however I am disappointed in 4. When Beyonce puts out a single it is usually a hit and the album contains some massive hits such as Run this World, Til the end of time, Countdown and Best You Never Had however the rest is filler mush which at this point in her career fans have come to expect more. We want some hidden gems on the album and hence that 4 shows how the demise of the CD might come about if high calibre artists do not invest the time in the whole of the album and not just concentrating on some singles.
続きを読む
違反を報告
レビュー を日本語に翻訳する