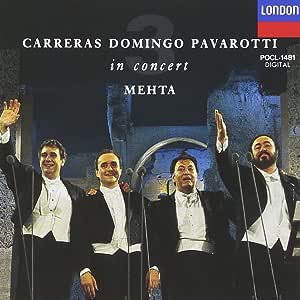 Italo Baudo
5つ星のうち5.0 Great for those who haven't watched the original Broadcast.
2019年10月7日に英国でレビュー済み
Amazonで購入
This DVD is very good, but it is an edited version of the original Italian RAI UNO TV broadcast in July 1990, where you could see the spontaneous and funny banter going on between the orchestra director Zubin Mehta and the three tenors.
Unfortunately, in this DVD all that has been lost; taken off the recording.
Of course, because of the original language during the concert between the tenors and Zubin Mehta was Italian, keeping the jokes in a DVD made available to a much wider audience wouldn't have made sense, unless, of course, the viewer understood Italian that is.
If you haven't watched the original broadcast, you wouldn't be any the wiser, so it will still be fantastic, but if you did watch the original broadcast, then, a little disappointment lingers on.
続きを読む
3人のお客様がこれが役に立ったと考えています
違反を報告
レビュー を日本語に翻訳する

J D M Gray
5つ星のうち1.0 Unprecedented lapse by Decca!
2017年3月30日に英国でレビュー済み
Amazonで購入
Terrible playback! Some of the tracks make a clacking noise, which is worse according to the volume of the tenor. Pavarotti seems the worse affected, and E lucevan le stelle, and Nessun Dorma, two of my favourites, seemed worst affected.I wondered if my hitherto reliable equipment could be at fault but I tried the same tracks from a Pavarotti 50 of the best album and they played perfectly. Shame on you Decca, as your label was on both! This is puzzling as the 50 best was excellent, with 5 stars, and I have had no problems with other Decca CD's.
続きを読む
1人のお客様がこれが役に立ったと考えています
違反を報告
レビュー を日本語に翻訳する

Mr. B. Hayes
5つ星のうち5.0 It’s Brilliant!
2018年11月4日に英国でレビュー済み
Amazonで購入
Nothing to dislike about this DVD at all. Having seen the concert many times on TV, I knew exactly what I was getting when I ordered it… If you enjoyed the original concert, you’ll love this…
続きを読む
3人のお客様がこれが役に立ったと考えています
違反を報告
レビュー を日本語に翻訳する

Robert Noble Graham
5つ星のうち5.0 A night of wonderful magic
2018年3月11日に英国でレビュー済み
Amazonで購入
However often I watch it I always love it. This was the one. The follow-up concerts never captured that spark
続きを読む
4人のお客様がこれが役に立ったと考えています
違反を報告
レビュー を日本語に翻訳する

I. Giles
5つ星のうち5.0 A unique experience with spawned fine sequels but none better than this original
2011年11月19日に英国でレビュー済み
Amazonで購入
Prequel: It is not possible for reviewers to write separate reviews of the single and of the two disc deluxe versions even though they are not the same. This is a listing arrangement beyond the control of reviewers. Consequently this review covers both options together so please be patient and extract whichever information applies to your particular interests. Thanks, Ian Giles.

This original version of the original three tenors concerts given in Rome in 1990 was much copied but never matched for the sense of a unique and very special occasion. The actual recording is given good sound presented in stereo and DD 5.1 surround sound. The imaging is adequate by today's standards on close ups and only breaks up on distance shots. The camera work itself gives a good sense of immediacy and involvement - probably much better than being there at the time!

The selection of music, largely from opera and operetta, is unashamedly popular and is performed with total skill and a performance-aware delivery that positively invites increasingly enthusiastic audience support. All three singers are in good voice, probably more so than on the sequence of such concerts that followed. It would be easy for this to become a competitive activity, and so it is to a degree, but all three men are able to unite for the two encores - two Pavarotti specials ('O sole mio' and 'Nessun dorma') that are shared out between them with great camaraderie. Otherwise any competition is good humoured and fully understood as an essential ingredient to a very joyous occasion.

Everyone who buys this disc will have favourites in terms of aria and in terms of singer. Nevertheless, it would be hard to imagine anyone experiencing disappointment. Both Mehta and his orchestra accompany with evident enjoyment, rising to the occasion, including the orchestra only items which give the singers a bit of a 'breather' and add a touch of aural variety.

The booklet in the original single disc version provides all the texts and other basic information. The later 'deluxe' two disc set, published in 2007, provides subtitles which is a far preferable option to the supplied texts of the first version. There are no texts supplied in the abbreviated booklet of the deluxe version. The later deluxe version is not significantly sonically or visually superior to the first version and this has been carefully compared. The second disc in the deluxe version provides a second disc a documentary describing the creation of this concert narrated by Derek Jacobi. There is also a track enabling those who wish to join in a karaoke version of 'O sole mio.'

The single disc, or two disc deluxe version, of this unique concert and occasion cannot be compared to others and can confidently be recommended to anyone who finds the idea of such an event an attraction. That is why it has been such a top seller ever since it was issued.
続きを読む
6人のお客様がこれが役に立ったと考えています
違反を報告
レビュー を日本語に翻訳する
すべてのレビューを参照します
Amazonプライム会員ならお急ぎ便、日時指定便が使い放題
さらに、映画もTV番組も見放題。200万曲が聴き放題 。クラウドに好きなだけ写真も保存可能。
> プライムを無料で試す