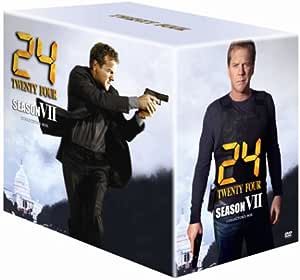 Mr. D. L. Rees
5つ星のうち5.0 ADRENALINE-FUELLED ACTION WHICH TRULY GRIPS
2017年8月10日に英国でレビュー済み
Amazonで購入
Season 6 was heavily criticized for its violence. Striving to put the show back on track, its creators start Season 7 with Jack Bauer facing a Senate Committee - it investigating allegations of torture he inflicted on interviewees. Bauer is unrepentant. Better a terrorist be badly hurt if information acquired saves lives - in this latest instance a coachload of passengers, including children.

Politically incorrect tactics are to prove an issue throughout this excellent new season. Bauer refuses to be straitjacketed by protocol if lives are in imminent danger. Forever he does what he thinks right, prepared to face the consequences.

Result? High-powered excitement in a league of its own - pace never relaxing, tension at times almost unbearable. Excellent use of split screen and, of course, that relentlessly ticking clock add to the suspense especially as an hour, any hour, nears its end. The last few seconds always pack a punch, on at least one occasion likely to provoke a loud "NO!!!" from shocked viewers.

Admittedly there is a slight falling off in the last few episodes, two new storylines rather weak. They, though, are eclipsed by the sheer brilliance elsewhere - great acting (Kiefer Sutherland superb as the action man tormented by memories), taut writing,stunning twists and turns, audacious stunts.

Bonuses are well worth exploring. Every disc includes commentaries, interesting "scenemaker" features. Disc 6 tells of the writers' major problems as they plotted new scenarios. Some simply did not work and had to be jettisoned. What best to do? Tempers flared as pressure increased - for them the clock relentlessly ticking too! The Writers' Strike proved a blessing, time for a rethink.

Be advised that on Disc 4, almost hidden away, there is perhaps the best bonus of all. It explores all the seasons so far, a reminder of highlights, key figures and spectacular demises - some greatly regretted, others decidedly not.

In short, here is a box set to delight fans - impact increased by being able to view episodes in quick succession.

L T
5つ星のうち5.0 Much better than the final season 8, not as good as the rest.
2010年11月3日に英国でレビュー済み
Amazonで購入
Season 7 was the first season back after a near 2 year hiatus of '24' being off our screens due to the writer's strike of the time. Before I start on Season 7 I'd like to mention that people say Season 6 was one of the worst seasons of 24, but I simply don't see it, personally I think Season 8 the final season was the worst of 24 in my honest opinion - as most final seasons of tv shows are - but to this show's credit, and it deserves a lot of praise for this, no matter what I think of the last two seasons compared to seasons 1-6 the show itself was never at any point anything less than phenomenal with a pure entertainment value that many a show fail to reach. So when I say the last 2 seasons weren't as good I am of course comparing it directly to it's own award winning material at it's very best. 24 has always been simply on another level of immersion and intensity. The show is extremely addictive.

Season 7 opens up with Jack Bauer having returned to America to face charges in Washington DC of among other things the violation of human rights while in the line of duty, at which point as the hearing is about to begin Bauer is granted temporary leave due to his assistance being required by the FBI to which Jack reluctantly agrees to help when a shocking revelation is uncovered at the FBI headquarters which explains the FBI's need for Jack Bauer specifically. The threat on this day to start with is what's called a CIP device which is used to breach the United States firewall security which controls everything from street lights to air traffic control electronics, as well as many other critical infrastructure control. And terrorists have this device. There's a heck of a lot more to it than this of course this is simply the first act of a 3 act season essentially. There are 24 episodes in the season, each episode is 1 hour of the day told in real time. Hence the name '24'.

This blu ray release is pretty good. The picture quality while not the best I've ever seen certainly isn't bad at all. The sound quality on the other hand more than makes up for it, every episode in glorious DTS Master HD! And it sounds as good as it suggests let me tell you. Especially if you have an audio setup in your home capable of keeping up with it.

Not bad at all, but I've seen a lot better from the format.

Simply stunning, especially on this show. If you've only heard 24 on the television broadcast you do not know what you're missing out on with the hd master track on blu ray. Unreal.

Standard fare here, there's quite a lot of audio commentaries which is great and there's a couple other bonus features like a Making Of and Music Of 24, reason I give it 7/10 is because there's no audio commentary here from Kiefer Sutherland who plays Jack Bauer and there's a lot of recycling going on with some cast & crew appearing on different episodes commentaries in particular is Annie Wershching who plays FBI agent Renee Walker she's on a lot of the commentary tracks if not most of them.

Nice packaging, well made. Discs press out easily enough and are well labelled and placed. I'm especially pleased with the outer slip case that the box set case resides in as sometimes these can be a nightmare to slide out again. Not here the casing slides in and out with ease which is always good.

Ultimately is 24 Season 7 worth your £40 ? From a show quality standpoint it's a definite yes. From a blu ray complete package perspective it's also a sure fire yes given the standout audio which apart from the show itself is the standout jewell in this blu ray's crown for sure. This blu ray 24: Season 7 box set comes as very highly recommended to absolutely anybody, both fans of the show and first time chancers alike. Though honestly first timers I'd advise to start with the Season 1 DVD first as it's cheaper and introduces you to the show.

G. Hanks
5つ星のうち3.0 Good but by the numbers
2010年6月10日に英国でレビュー済み
Amazonで購入
Season 7 has stepped things up from the lull in quality provided by the last few series and also radically over-hauled setting and a vast majority of characters. The acting, moments of tension and emotional drama are consistently high and the production levels are top notch as usual.

The problem is that nothing feels really new here. Situations of peril feel revisited, Jack is almost always right as usual, twists and turns happen on a regular basis often mirroring previous series, people aren't to be trusted etc... The shock and horror of betrayals in previous series' are really dampened here as anyone who is familiar with 24 as a whole knows exactly the kind of twists and turns that will be coming. It does feel like they've made an effort to keep things fresh but the story arc feels recycled and overlong. It could end easily and satisfactorily by episode 12 but gets strung out to 24 episodes by just adding more peril and conspiracies. The fact is the story could have ended at about 4 junctures in the series with nobody being wiser to anything extra other than the name of the series being 8, 12 or 18. Instead it feels like the writers are chasing their own tales by rehashing similar ideas more than once within the same series.

Perhaps it is hard to do anything new with the series because its staples of action, espionage, intrigue and drama have been so thoroughly rinsed through in the previous series until threads start showing and the colour fades. If this is the case then they really should consider putting the IP to bed and buy some new clothes.

Saying all that it's not a poor show and is still enjoyable but it's no longer new, no longer has the same impact. Whilst familiarity with characters and their histories can increase emotional immersion and attachment, familiarity with the writing just makes it feel like a constant acute sense of deja vu. Buying this isn't a bad idea but for many I imagine that it will not have half the enjoyment factor that it used to.

AV1
5つ星のうち4.0 24's HD debut
2010年2月7日に英国でレビュー済み
Amazonで購入
Having been a massive fan of this groundbreaking series since day 1 I was excited that at last it was going to be making it's first appearance on blu ray (at least until I saw the price!!). The picture is pretty good with bold dark colours and bright scenes standing out. Definately an upgrade from the DVD, audio too is quite clear. All in all quite pleasing. I was surprised just how small the case was, which is definately better than the fat DVD boxes of the first few season's! All 24 episodes feature on 6 discs, there are some extras such as commentaries, deleted scenes, etc spread onto these discs too.

a few months have passed since Jack Baeur left Africa (24 Redemption) to face the hearings he had been avoiding. Whilst answering questions about his past, the FBI intervene & ask for Jack's help in apprehending a terrrorist beginning another stressful day for Baeur...

Now 24 has always been one of those shows which is unafraid to take bold new steps. In the past we have seen many popular characters unexpectedly killed or change sides and this series offers many twists throughout. You never quite know what to expect next. After 7 seasons the energy and wit of the show is still one of the best on TV. However season 7 is not the best season. In my opinion the story was stretched a little too much and some of the developments were a little disapointing for me. It is still a great show though. I guess it just felt a little unfamiliar for me as the action now takes place in Washington with CTU now disbanded resulting in the disappearance of a few characters and a lot of new faces to get used to.

That said the new President Allison Taylor is the best Commander-in-Chief the show has seen since David Palmer and the development of FBI Agent Walker's character is well written.

Elaine Simpson-long
5つ星のうち5.0 Never Fails
2009年11月19日に英国でレビュー済み
Amazonで購入
I remember watching the first series of 24 and being left absolutely breathless at the daring of it all. Of course, after two seasons it was lost to the BBC and I was bereft as I don't have Sky. However, I now think that this is not a bad thing as not sure I could watch it in bite size chunks any more but much prefer to sit down with the box sets and watch it straight through. Thought this season was brilliant, it had cliff hanger after cliff hanger, none of which were tedious, and my worry that Kim Bauer was back and would be as useless as ever, was totally wrong.

I enjoyed the setting in Washington, made a change from Los Angeles and I thought the female President was a really good idea (what happened to Wayne Palmer by the way - did he die?) as I thought this needed strengthening. Her daughter replaced Kim Bauer easily as the Most Irritating Character in 24 and it was also good to see some old and familiar faces return.

In short, loved every minute of it. Implausible - yes. Barmy - yes. Over the top - yes. So what, I don't care and am already looking forward to Season 8.