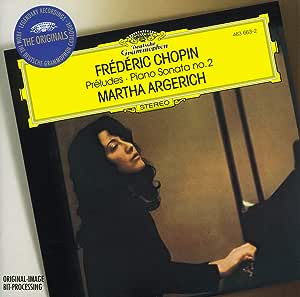 Tarkus
5つ星のうち5.0 the definitive Preludes
2007年11月14日に英国でレビュー済み
Amazonで購入
This is why Argerich is so highly rated. To sample her approach, try listening to her reading of the opening Prelude (in C major) and compare it to, say, Pollini's. Pollini's is a fine, deeply thought-out account. Argerich's, by contrast, is an immersion in the emotion of the piece. In works by other composers, some people might find her passionate approach off-putting - Argerich is often criticised for playing 'too fast' and with 'too much' emotion . But here, it's perfect, (and actually, I suspect, a little slower than her live performances of the same pieces). It's passionate of course, but technically accomplished and completely convincing. One of my 'Desert Island Discs'
続きを読む
35人のお客様がこれが役に立ったと考えています
役に立った
フィードバックを送信中...
フィードバックをお寄せいただきありがとうございます。
申し訳ありませんが、お客様の投票の記録に失敗しました。もう一度試してください。
違反を報告
レビュー を日本語に翻訳する

Chris
5つ星のうち4.0 Enjoy listening but doesn't sound like "Chopin"
2018年9月14日にアメリカ合衆国でレビュー済み
Amazonで購入
This is an enjoyable CD, well recorded demonstrating impressive piano skills. If this is all that works for you, it is 5*. However, it is pumped up Chopin, not the reflective Chopin I expect based on the notes. Without a formal music education I don't know if Ms Argerich's interpretation is within the sphere Chopin intended. I believe it is inconsistent with other familial Chopin compositions, and note others have played these differently, expressing sensitivity lacking here. Ashkenazy's recording sounds more authentic. I like his performance very much however, audio quality is poorer than desired. My pick is the recent Linn issue by Ingrid Fliter, not as flashy as Argerich ... which again begs the question what artistic messages are intended to be conveyed? You decide. I started to rate this 3* but decided not fair. But it can't be 5* because it isn't Chopin. A similar case with a distinction .... Horowitz recording of Liszt Sonata in B Minor is a somewhat idiosyncratic interpretation, spirited. The difference is for Liszt this is OK (vs Arrau), noting Liszt was one of compositions were written to demonstrate keyboard artistry. Rachmaninoff's concertos are ones to demostrate keyboard artistry, although require large hands or the pianist will drop notes. Few pianists have hit all the notes in the 3d. I don't see Chopin's Preludes as ones to dazzle. Having more than one rendition is good. I'll see which I listen to more and donate the other.

Update: Since I first wrote this I've listened to both Argerich and Fliter numerous times ... call it an experiment. I enjoy Argerich more however, I stand by my assessment above. I can't call this a 5* product because fundamentally it is a deviation from Chopin. It works for me to own both.
続きを読む
役に立った
フィードバックを送信中...
フィードバックをお寄せいただきありがとうございます。
申し訳ありませんが、お客様の投票の記録に失敗しました。もう一度試してください。
違反を報告
レビュー を日本語に翻訳する
その他の国際レビューを読み込む

Michael P. McParland
5つ星のうち5.0 Supreme Performance
2013年4月1日にアメリカ合衆国でレビュー済み
Amazonで購入
Once again I will come into this stating that I am not an expert on music theory and am but a mere lover of classical music. I know what I like and I love these pieces and the performance. Nothing I try to add to any debate will win the critics over. Chopin was a great master and one that is still accessible to the common man. Mozart and Chopin are my two favorite composers. Mastery and genius unequalled. I'm much tougher on performances of their works. I say you can't go wrong with this supreme performance.
続きを読む
1人のお客様がこれが役に立ったと考えています
役に立った
フィードバックを送信中...
フィードバックをお寄せいただきありがとうございます。
申し訳ありませんが、お客様の投票の記録に失敗しました。もう一度試してください。
違反を報告
レビュー を日本語に翻訳する

BJAMAZON
5つ星のうち5.0 Beautiful!
2012年9月30日にアメリカ合衆国でレビュー済み
Amazonで購入
Martha Argerich plays the Chopin preludes so beautifully, with the balance of sensitivity or energy or craziness that it seems Chopin intended in the first place... it feels she is the conduit to his heart and soul. The recording is of very good quality, no hissing or cracks, which of course make the listening even more so enjoyable.
続きを読む
役に立った
フィードバックを送信中...
フィードバックをお寄せいただきありがとうございます。
申し訳ありませんが、お客様の投票の記録に失敗しました。もう一度試してください。
違反を報告
レビュー を日本語に翻訳する

Byrna
5つ星のうち2.0 Argerich plays Chopin like Liszt or Rachmaninoff
2011年11月26日にアメリカ合衆国でレビュー済み
Amazonで購入
Many people seem to get completely confused between great "sounding" performances with amazing technique and great musical performances which are played in the spirit and style in which the composer intended them to be played.

Frederic Chopin's music is NOT AT ALL like that of Franz Liszt, nor Sergei Rachmaninoff. After listening to several performances on CD by Argerich, and finally this one, I realized that Argerich cannot play Chopin properly. She seems to think she is performing an acrobatic act, like one does when playing the shallow yet technically brilliant music of Franz Liszt. Many works of Rachmaninoff are also like this - technically fascinating, flashy, but musical failures. Chopin's music was RARELY like that of Liszt or Rachmaninoff. Chopin's music was almost never a musical failure. He is a deep, thoughtful, almost introverted, romantic composer, but with a fire and passion that expresses itself through the beauty of the intonations, pauses, moderate pace (not out of control speed that we see with Argerich). Anyone who does not understand or appreciate this, will rate Argerich's playing as 5-star, and be yet another member of the masses who have no idea about Chopin's insight and intellectual superiority to second-rate composers like Liszt or Rachmaninoff. This is why Chopin is among the top tier of the Great Composers, and Liszt and Rachmaninoff are not.

Again, don't get mixed up between how POPULAR "Rach 2" might be (his Second Piano concerto) or Rach 3 or his Prelude etc... or how astounding Liszt's Transcendental Etudes or Mephisto waltzes sound to the ear with all the lightning fast runs and chords and thingy-jingies that the pianist does to impress technically, but fail miserably to say much of anything musically or artistically. So Argerich is also a very popular pianist but her aggressive and excessively quick playing tempos do not suit Chopin's genius.

Chopin was intense beyond belief, but without being flashy or a show-off. He did not see the need to write lightning-rod pieces to gain popularity (though thanks to the amazing generosity of Liszt, Chopin did gain the recognition he deserved).

There are TOO MANY pianists out there even today, who think they need to do something "different" to stand out from the "crowd" when recording what many probably think the "same ol' " Chopin pieces, recorded by hundreds of pianists to date. Unfortunately, standing out is to sell records, which they definitely need to do, to survive, but it DOES NOT mean changing the pieces and the composer's intentions to a point where it becomes disrespectful or just downright messy. That's what Argerich has done here. There are other show-offs like Lang Lang, and that infamous clown: Horowitz (who practically re-wrote pieces just to show himself to the public, butchering their integrity in the process) and others who do the same and make lots of money. But they cannot be said to play Chopin by maintaining that awfully delicate and difficult balance between fire, urgency, technique and thoughtfulness and inwardly quiet, almost shy, reflection, which made Chopin into an epic phenomenon of a composer.

I recommend people like Vladimir Ashkenazy or even Maurizio Pollini, anytime, instead of Argerich. Or other truly insightful musicians like Murray Perahia, Garrick Ohlssohn and Tamas Vasary. The point is: One does not NEED to make Chopin any MORE exciting by playing his music over-tempo, and overly aggressively... Chopin's music is EXCITING enough by its sheer depth ... AS IS!
続きを読む
13人のお客様がこれが役に立ったと考えています
役に立った
フィードバックを送信中...
フィードバックをお寄せいただきありがとうございます。
申し訳ありませんが、お客様の投票の記録に失敗しました。もう一度試してください。
違反を報告
レビュー を日本語に翻訳する