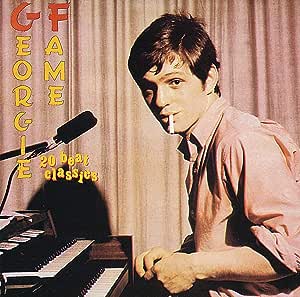 Super reissue of the Van Morrison collaborator and veteran keyboardist's prime years of the 1960's and 70's. Includes his Top 40 hit single "Yea Yea" and his take on James Moody's "Moody's Mood For Love" as well as "My Girl" and many more.

Amazon Customer
5つ星のうち5.0 although excellent, was far too loud - as it ALWAYS ...
2017年4月9日に英国でレビュー済み
Amazonで購入
I was looking for a compilation that has a number of the songs I heard at his recent concert I attended, including a few of his more popular ones - I found it in this. It's much more satisfying playing this CD than being at the concert where the backing music to Georgie, although excellent, was far too loud - as it ALWAYS is at this type of concert - and overpowered his singing (why do musicians think that loud is good, and it wasn't necessary for Georgie Fame's type of music).
続きを読む
3人のお客様がこれが役に立ったと考えています
違反を報告
レビュー を日本語に翻訳する

ClivetheJive
5つ星のうち5.0 Georgie Fame at his best
2018年12月11日に英国でレビュー済み
Amazonで購入
Heard Yeh Yeh on the radio a few weeks ago and thought that it still sounded good. Bought 20 Beat Classics on that basis and now that I’ve heard it all, I can say it was bought with no regrets at all. This CD is so good both musically, totally and with a great range of Fame’s early catalogue inc most, if not all, the big hits. It is firmly rooted in the 60s, and keeps that groove throughout, but then isn’t so much fantastic music. He is a truly great vocalist and a keen musician who knew a good song when he heard it. The CD is well balanced and contains my favourite Fame track Sitting in the Park. It comes at a superb price for such a well constructed set of songs and takes me back to my youth and going to youth clubs etc etc. My only quibble is the lack of info on the inner sleeve. Great CD
続きを読む
1人のお客様がこれが役に立ったと考えています
違反を報告
レビュー を日本語に翻訳する

D. J. H. Thorn
5つ星のうち5.0 The swing's the thing
2008年10月17日に英国でレビュー済み
Amazonで購入
Georgie Fame could do little wrong from the moment he burst into the public consciousness with the no.1 hit, 'Yeh Yeh'. Not surprisingly, this collection of mid-1960s recordings opens with this and his follow-up chart-topper, 'Get Away'. These are among the poppier tracks, along with Bobby Hebb's 'Sunny' and 'Sitting In The Park', a languid, summery hit. All of the music contained here though is jazz-inflected r&b, led by Fame's organ, husky vocals and complemented by brass. Most of the tracks are uptempo and reflect a buoyant and exciting musical era. The album is a capsule of swinging Britain as we like to imagine it, even if the image isn't the truth. Perhaps the only mistake is the cover of 'Green Onions'. It's actually a good track in its own right, but against Booker T's awesome original doesn't stand a chance. James Brown fans might feel the same about 'Papa's Got A Brand New Bag'. Nevertheless, this is a superb compilation. Significantly, it's been around since 1980.
続きを読む
17人のお客様がこれが役に立ったと考えています
違反を報告
レビュー を日本語に翻訳する

Humberston
5つ星のうち4.0 Georgie's good 'uns
2013年6月16日に英国でレビュー済み
Amazonで購入
This is a good CD, representing the hits, and great other tunes from the days of the Blue Flames.
Some great stuff here, as well as a few so-so covers of Rand B classics.
If you like Georgie, this is a good CD to have
続きを読む
6人のお客様がこれが役に立ったと考えています
違反を報告
レビュー を日本語に翻訳する
すべてのレビューを参照します
Amazonプライム会員ならお急ぎ便、日時指定便が使い放題
さらに、映画もTV番組も見放題。200万曲が聴き放題 。クラウドに好きなだけ写真も保存可能。
> プライムを無料で試す