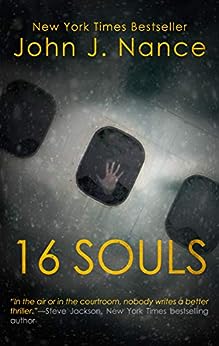 wayne kidd
5つ星のうち5.0 Not to be put down
2020年10月4日に英国でレビュー済み
Amazonで購入
A friend introduce me to this author. I am so glad he did. Couldn’t put the book down and now am on another of this author books.

I like how it doesn’t take a few chapters to get in to the story like other books. Straight and down to the nitty gritty.

A brilliant read and hard to put down.

I also like that there is a mixture of short and long chapters.

Well worth a read.

Mr. M. J. Hall
5つ星のうち5.0 excellent
2017年10月12日に英国でレビュー済み
Amazonで購入
another great book from john j nance.i have read most of his books and this one is up to his usual high standard.
続きを読む
違反を報告
レビュー を日本語に翻訳する

aes
5つ星のうち4.0 Welcome back John Nance!
2019年2月7日にカナダでレビュー済み
Amazonで購入
I have loved 8 of 10 of John Nance's prior novels. Nance clearly changed his writing style with "Orbit," eschewing long, detailed narratives for shorter ones with shorter chapters and less character development and fewer subplots. After 10 years I suspected there would be no more novels, so I was thrilled when "Lockout" was published. "16 Souls" is a welcome new novel, a suspenseful aviation disaster with a lead character Nance makes us care about. The reason I'm giving it only 4 stars, however, is that I find the legal arguments unconvincing.

A pilot in an extremely dangerous situation is charged with second degree murder after some of his passengers die in a crash, on the basis that he did not obey a company executive's order to land differently. The charge is that the pilot "knowingly" landed in a manner that he knew would cause death. I too am a lawyer, and under Canadian criminal law, second degree murder occurs when someone causes the death of another where the person, “for an unlawful object,” does anything he knows or ought to know is likely to cause death. In "16 Souls," the pilot who is prosecuted for murder is not engaged in any unlawful act - he merely exercises his overriding discretion as the captain of an airliner to make the best decision he can to minimize death in an unprecedented emergency. Under Colorado law, a person commits second degree murder simply if he or she "knowingly" causes the death of another person. The statute in issue does not require the person to be engaged in a criminal act at the time. Nance has his characters emphasize the need for a change in the Colorado law, but I suspect the desired change is more about not allowing disobedience trailer of a corporate executive’s order to an airline captain to constitute knowingly committing an act that can cause death, rather than requiring that the act be committed in the course of another criminal act. Perhaps someone with knowledge of Colorado law can clarify.
続きを読む
違反を報告
レビュー を日本語に翻訳する
すべてのレビューを参照します
トップへ戻る
Amazonについて
Amazonでビジネス
Amazonでのお支払い
ヘルプ＆ガイド
日本語ショッピングのための言語を選択します。 日本ショッピングのための国/地域を選択します。
© 1996-2020, Amazon.com, Inc. or its affiliates