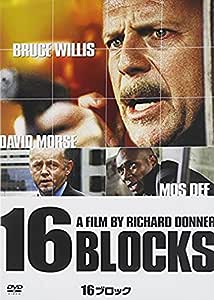 FJY
5つ星のうち4.0 Excellent
2018年2月12日に英国でレビュー済み
Amazonで購入
I bought this DVD for a friend, so I haven't seen it myself. However, I asked him for his opinion of it and he said that it was a very good film. He also said that Bruce Willis and his co-star, Mos Def, were both very good and they had good chemistry together. My friend also said that the film had plenty of action and that it was very entertaining. He asked me to give the film four stars out of five, as it was an excellent action film and well worth seeing.

Sorry that I am unable to review this film myself, but I thought that I would pass on my friend's opinions of it. He seemed to have enjoyed it, anyway. Maybe I will consider buying a copy of the DVD for myself now...

Corey Newcombe
5つ星のうち3.0 It ain't Miller time man....
2014年2月4日に英国でレビュー済み
Amazonで購入
Jack Mosley, a burnt-out detective, is assigned the unenviable task of transporting a fast- talking convict from jail to a courthouse 16 blocks away.

However, along the way he learns that the man is supposed to testify against Mosley's colleagues, and the entire NYPD wants him dead.

Mosley must choose between loyalty to his colleagues and protecting the witness, and never has such a short distance seemed so long...

The thought of Richard Donner returning to the big screen to make an action film he could do in his sleep is appealing, but the fact that it stars Willis, makes this almost unmissable.

It's a simple set up, Willis has to get Mos Def to the court before a certain time, with all the cops after Def, wanting to kill him.

It should have been up there with Die Hard and Lethal weapon, but it turns out to be entertaining, but very slow in places.

Willis is great as Jack, a man carrying the whole world on his shoulders, here's a man who ha s a chance of redemption, and that is in the form of Bunker, who has to be the most annoying character of 2006.

When you start to sympathise with Morse's character, things are not looking good. There was on point where I felt empathy toward Bunker, when we first meet Morse's character in the bar, but soon after he became Ruby Rhod irritating.

But it's a fun movie, the director is back on form after Timeline, and the bad guys are your typical ones from the eighties.

Don't expect the earth, just be prepared for a good thriller, with a good performance from Willis, and you'll enjoy this.

DL Productions UK
5つ星のうち4.0 Jack And Eddie On The Run!
2008年3月3日に英国でレビュー済み
Amazonで購入
16 Blocks is a fast paced adventure where John Mosley has to get a witness (Eddie, played by Mos Def) to the grand jury to testify. But as usual this is not the smoothest of operations and John ends up doing some crazy stuff, and Eddie talks the pants off him! Hiding, scheming and generally keeping a low profile is the game here, before the other cops stop them, as the price of the testament is high.

This isn't a bad movie, but it's a bit boring at times, the long dialogue when they're hiding out, the scene at the Chinese man's apartment being the most dullest in the film. Mos Def carries Eddie well, which is great because most people think MCs never make good film stars, but Mos was convincing. Bruce Willis was amazing in this too, and his attitude is very different from his well known character John McClane. I like the twists and turns, but some of it does feel a bit too polished and predictable.

This isn't a very good Blu-Ray though, average bitrate is around 20mbps - when you think the Simpsons Movie got a 35 average, this is quite poor! The quality of the AV-C is good though, and the sound isn't bad, averaging at around 1mbps - 5.1 DD. Would have been better with a TruHD soundtrack.

The visually impaired amongst us will be very happy to know it's been audio described by John Driscal (I think he's one of the best AD readers), his track is only a 2.0 192kbps, bit poor if you ask me.

The extras are not that good, an interview and deleted scenes, then you get the alternative ending. You would have thought they would have upped the bitrate and made this a BD50, but no, it's got less extras than the DVD!

Poor Blu-ray, but excellent movie, this is why it lost a star.

Brendan Ray Cyrus
5つ星のうち3.0 The Gauntlet
2011年12月28日に英国でレビュー済み
Amazonで購入
Was this a remake of THE GAUNTLET (Clint Eastwood, 1977)??
Anyhoo, 16 BLOCKS gives us a standard Bruce Willis action film which is fast-paced and very entertaining.

Jack Mosley (Willis) is an washed-up, alcoholic cop who's usually been honest for his Police department. And now he's assigned to take a loud mouth talkative criminal named Eddie (Mos Def - annoying voice) just 16 blocks for a court appearance. Trouble is, though, Eddie is scheduled to testify against some crooked cops who also work in the same Department as Bruce WIllis....and Willis is unaware of this.

Willis plays the aging cop well, and seems to have picked up from the part he played in (Tony Scott's movie) 'The Last Boyscout'. He grumbles and drinks and generally hates what he does.
Mos Def plays the irritating convict and his voice makes me want to punch the TV

Elleppi
5つ星のうち4.0 A dark and cinical cop film with an excellent bruce Willis
2015年8月11日に英国でレビュー済み
Amazonで購入
From Letal Weapon and The Omen director, Richard Donner, a tough and bitter crime plot with an excellent Bruce Willis playing a tired cop who fights despite everything, in a cinical and merciless world. Quite dark and enjoyable
続きを読む
1人のお客様がこれが役に立ったと考えています
役に立った
フィードバックを送信中...
フィードバックをお寄せいただきありがとうございます。
申し訳ありませんが、お客様の投票の記録に失敗しました。もう一度試してください。
違反を報告
レビュー を日本語に翻訳する

Andrew
5つ星のうち4.0 A rather different Bruce Willis - but just as good.
2017年5月21日に英国でレビュー済み
Amazonで購入
Bruce Willis is a sightly different hero in this film - care-worn and tired. Yet comes up with the goods without too much stunt work. Very enjoyable!
続きを読む
役に立った
フィードバックを送信中...
フィードバックをお寄せいただきありがとうございます。
申し訳ありませんが、お客様の投票の記録に失敗しました。もう一度試してください。
違反を報告
レビュー を日本語に翻訳する