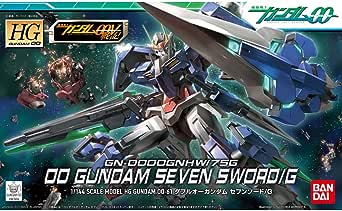 BNuts
5つ星のうち4.0 An Excellent Upgrade For Any 00-Raiser Kit
2015年11月3日にカナダでレビュー済み
Amazonで購入
In the interest of full disclosure, I merely added the weapons and parts from this kit to my pre-existing 'HG 1/144 00 Raiser + GN Sword III' kit. That said, it was a fairly simple and fast build. The kneecaps were easy to switch out. The only challenge was the central piece to the Buster Sword, because I had to take it apart again to colour the particle emitters for the shield mode. It really would be useful if Bandai had given us stickers to use, but green Gundam marker it is!

I also find it ironic that while the clear pieces for the Buster Rifle II come in green, as do the parts for the GN Katars, the clear parts for the GN Sword IIs (whether normal, long, or short) are uncoloured. It would have easily been appreciated for Bandai to give us pre-coloured clear pieces this time -- but looked at another way, it's an opportunity to customize by using any colour you have available, provided you don't mind mixing with all the clear green you already have.

I decided to give my 00 maximum variety, so I gave it the long and short GN Sword IIs, and gave the originals to my Arios/M and Fenice Rinascita respectively. The Arios will not need a new place to store its GN Sword II, and I'm hoping I can put the Rinascita's on its back, using the spare sideskirt from the Seven Sword/G kit. I tried to add the two beam saber hilts from this kit to my 00, but they just ended up getting in the way of the GN sword IIs, even the short one. If the 00 possessed overwhelming power before, now any grunt who sees it should just call in sick.

All of this leaves me with one problem: If I want the 0-Raiser docked I need to get rid of one weapon to make room for both wings. For now it's the GN Sword III that goes, but another solution would be nice. I noticed that I could peg in a spare arm into the same hole that a stand uses, but that's not much use during docking since that would place a pegged weapon between the 0-Raiser and the 00's back. I'm open to suggestions.

Otherwise this makes the 00-Raiser even more formidable.

Although I did not build the whole thing this took my about 2 hours with just my bay nippers and my metallic green gundam marker. It is a build anyone should be able to do. Highly recommended.

B. Steinacher
5つ星のうち5.0 a great 1/144 kit
2018年9月4日にカナダでレビュー済み
Amazonで購入
Even tho the name is wrong it is indeed a 1/144 scale Gunpla kit NOT some premade action figure.
Was a fun build, lots of weapons and such! Looks great on my shelf fighting a Zaku. Tho I would recommend getting a action base for it as the swords can cause balancing issues.
続きを読む
役に立った
フィードバックを送信中...
フィードバックをお寄せいただきありがとうございます。
申し訳ありませんが、お客様の投票の記録に失敗しました。もう一度試してください。
違反を報告
レビュー を日本語に翻訳する

Russell Bruner
5つ星のうち5.0 First Gundam, and it was a great piece to start with
2011年3月8日にアメリカ合衆国でレビュー済み
Amazonで購入
The Seven sword was one of many Gundams I was looking at when first getting into the market for one.
It was definitely a fun experience putting together.
Being my first Gundam, I wasn't exactly sure what to expect, but everything but the hands have nice tight movement, the pose ability is limited when carrying the big sword or rifle.
Still can pull off some awesome looks with or without them.
He comes loaded with tons of weapons. Hence, the name, Seven Sword.

Pros: Lightweight, extremely articulate, nice colors, tons of weapons, looks great when finished, comes with extra knee caps for which to mount to the GN II swords(I believe that's what they are.) Or you can use the normal white knee covers both look great.
The Manual was easy to follow, even if you don't read Japanese(Which is how the instructions read.)

Cons: It may not really be a con, but while trying to change out the knee caps that are able to mount the GN II swords, I broke one of the mounting pegs on the knee mechanism, I may have just been being a little too rough with it though, with it being my first Gundam model.

Austin L.
5つ星のうち4.0 Great Build, lots of stuff, but a couple minor issues.
2015年4月26日にアメリカ合衆国でレビュー済み
Amazonで購入
I love 00. Its my favorite Anime, and this was the first kit I built from the series. Being that the 00 Gundam is my favorite gundam ever, I had to build its 7 sword variant. It was a ton of fun. The kits comes with a TON of stuff. The GN Sword 2 Rifle, GN Long Blade, GH Short Blade (that has a gimmick to extend it with a wire), GN Buster Sword, and 2 GN Beam Sabers. The SOLE reason this got a 4 star instead of a 5 star is because, of the head. It contains a million small parts, but that's not the reason. The Reason is the top of the V Fin is a yellow sticker, and not two peices. The red part is also a sticker. Those are all fine and dandy until you meet the GN Condensers on both sides of the head. These were a nightmare. Its clear plastic, that I'm not sure was molded right because the side of the head has two pegs that kind of go into the the area where the clear plastic is supposed to be, just like the show. Well on one side of BOTH of these clear parts the area where the little peg is supposed to go is molded in with clear plastic. I tried cutting it out to get the parts to go, and now the parts show the stress marks in the plastic. I just trashed them. I mean the head looks fine without them, but still I spent an hour looking for a video on the internet to see someone building it and i just saw someone just pop them in. All and all this is a great kit for those of us who love gundam, hg's, and 00.
続きを読む
2人のお客様がこれが役に立ったと考えています
役に立った
フィードバックを送信中...
フィードバックをお寄せいただきありがとうございます。
申し訳ありませんが、お客様の投票の記録に失敗しました。もう一度試してください。
違反を報告
レビュー を日本語に翻訳する