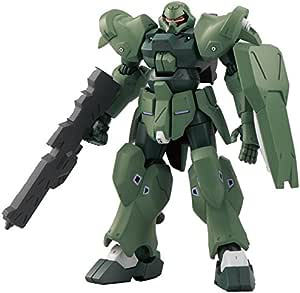 Detrius19
5つ星のうち3.0 Looks great, but limited articulation.
2015年6月5日にアメリカ合衆国でレビュー済み
Amazonで購入
Bandai has been doing a great job with most of it's HG 1/144 scale kits for the past few years, making them look great, but also making them function well, with ingenious combination of polycap and plastic joints working together to allow very fluid movement. I personally expected a relatively new kit from them not to go backward in either of those regards.

This kit ticks that first box really well - it looks very good. Sprue points are mostly well hidden, and green makes the visible ones pretty easy to miss. The mold looks good all around, with the head and beam axe being especially strong points because of the vibrantly colored clear plastic. I'm not a fan of the large, clunky rifle included, but I think fault mostly lies with the show for that issue. The strongest part of this kit is the overall look, and if I'm being fair again the credit for that goes back to the show too, though Bandai could have done worse.

But when it comes to articulation...this kit suffers. The waist of the suit uses it's odd shape to it's advantage and moves great, and the head has pretty free range of motion, able to turn 180 degrees and face up and down to a good degree. Foot, ankle, and hip articulation is good, but the knee joints move less than 90 degrees. In standing positions this doesn't cause problems, but if you have an action base your "active" poses are pretty limited.

The worst articulation in the kit is in the arms. The elbow joints moving just shy of 90 degrees, the wrists turn, but hardly allow any other motion, and the shoulders...well they bother me the most. The shoulders use ball joints, with hinged sockets inside the torso, which is great, but on all other models I've built that use this, the ball joint itself is also on a hinge inside the shoulder, allowing a really wide range of motion (the Jesta has the best example of this I can think of at the moment), but Gehennam (Jahannam?) doesn't. The ball joint is statically attached to the shoulder, and it results in it popping out a lot when trying to pose.

A lot of the joints are limited because the suit design includes clearly circular shaped joints, but I can't figure out why the shoulders couldn't have that one extra part...

Bottom line? I don't hate the kit, and I don't regret buying it. The design looks really good, very reminiscent of the Zaku, but with a new style. I want to be really happy with the kit, but the articulation just makes it really hard.
続きを読む
3人のお客様がこれが役に立ったと考えています
違反を報告
レビュー を日本語に翻訳する

Matt Vigil
5つ星のうち3.0 Although the product looks very cool, it is quite brittle
2015年10月19日にアメリカ合衆国でレビュー済み
Amazonで購入
Overall I would give this product three stars. Although the product looks very cool, it is quite brittle. The small joints make it difficult for some parts to keep their place, and after multiple uses, it shows wear and falls apart quickly. While building the figurine, I experienced a little bit of frustration due to the pieces being hard to find and difficult to get out of their places. It was an easy build despite the directions being in a different language. I recommend this for all kids who like to model, but need more experience because of its small size and somewhat confusing pieces. It is a great learning project.
続きを読む
2人のお客様がこれが役に立ったと考えています
違反を報告
レビュー を日本語に翻訳する
すべてのレビューを参照します
Amazonプライム会員ならお急ぎ便、日時指定便が使い放題
さらに、映画もTV番組も見放題。200万曲が聴き放題 。クラウドに好きなだけ写真も保存可能。
> プライムを無料で試す