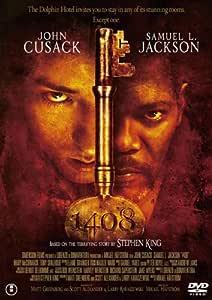 Spike Owen
5つ星のうち3.0 Dolphin Sandwich.
2017年3月10日に英国でレビュー済み
Amazonで購入
1408 is based on one of horror writer Stephen King's short stories. It stars John Cusack as a supernatural investigator who rents room 1408 at The Hotel Dolphin in New York. It is said to be a most haunted room and the scene of many deaths. He soon finds his scepticism tested to the max.

Although it has deep themes of grief et al, this essentially boils down to one man in a room being plagued by psychological and physical attacks, with the intended chills and shocks surreal in presentation. It's all very twisty and big on conundrums, which makes a second viewing something of a necessity, whilst Cusack's performance is also reason to check in for another viewing. However, it's not the scary movie some have lauded it as, in fact it's more fun-house palaver than anything terrifying, but there's no doubting the intelligence and skill of the writing. The mind is a curious, wonderful and troubling thing, and 1408 wants us to know it. 6/10

He travels to New York to spend one night in room 1408 of the Dolphin Hotel, which is permanently unavailable for guests.

Reluctant manager Gerald Olin objects to his request and offers an upgrade, expensive booze and finally the reports relating the death of more than fifty guests along decades in the room.

After so many years of bad Stephen King horror movies, this finally brings the writers imagination back to the screen, and its mainly thanks to Jackson and Cusack. Usually with King movies, you don't get two actors as prolific as this, with the exception of a few, and when there are limited characters in the film (Misery, and The Shining), we have more time to focus on the main characters.

For the most part, its the John Cusack show, and like him or not, he really puts in a great performance as the cynic who finally starts to believe. Jackson is great,but he is little more than en extended cameo.

Its pretty scary, and deals with loss to good effect, and whichever version you have seen, its still a satisfying, unnerving experience.

And it was refreshing to see a 'classical' ghost story released during a time when every other horror movie relied on gore for the thrills.

Steve
5つ星のうち5.0 A hidden gem
2020年11月20日に英国でレビュー済み
Amazonで購入
1408 is a hidden gem amongst the many Stephen King movies and harks back to his earlier stuff from the 80's & 90's. Cussack and Jackson act their socks off in this genuinely thrilling horror and any Stephen King fan or newbie to hi work should have this is their collection.
Great stuff.
続きを読む

eduardo
5つ星のうち1.0 AWFUL FILM
2020年4月21日に英国でレビュー済み
Amazonで購入
I can honestly say that this is high on the list of the worse films I have watched. The overall plot is totally ludicrous. The acting, oh dear the acting, is bad beyond belief. It is a film worthy of the waste bin. I really struggled to watch it through to the end but I wanted to see if it would get any worse and sad to say it did.
続きを読む
違反を報告
レビュー を日本語に翻訳する
すべてのレビューを参照します
Amazonプライム会員ならお急ぎ便、日時指定便が使い放題
さらに、映画もTV番組も見放題。200万曲が聴き放題 。クラウドに好きなだけ写真も保存可能。
> プライムを無料で試す