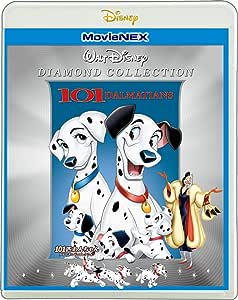 Andrew McCann
5つ星のうち5.0 A Classic and Memorable Disney Masterpiece
2013年3月31日に英国でレビュー済み
Amazonで購入
Having originally viewed '101 Dalmatians' when it first appeared in the cinemas, it made a distinct impression on me, as it represented state-of-the-art animation at the time and was, in my opinion, beautifully made and represented Disney productions at their best.

Although I originally owned a twenty minute Super-8 film version produced by Disney in the late 70s/early 80s, which replicated the closest I could get to the "big screen" experience at that time, this DVD looks absolutely stunning on my 50" Panasonic Viera television. In fact it looks as good as it did in the cinema. (Bear in mind that I am writing about the DVD version here and have not seen the latest Blu-ray version, which will have to be pretty exceptional to supersede the quality evident in this DVD (viewed via an upscaling DVD player).

Modern audiences are used to extremely sophisticated animation techniques and their 3D variants, which are far removed from the traditional approaches which were applied in the making of this film (and which make it a true classic of its time).

It therefore may not appeal to those who have been weaned on the highly imaginative and successful animated box-office blockbusters of today, who may feel that it is rather dated when seen against the current competition.

However traditionalists and those with fond memories of this film from the past will, I am sure, find this to be an excellent purchase and a valuable addition to their collection.

BlackBrigand
5つ星のうち5.0 A Disney Classic
2019年6月21日に英国でレビュー済み
Amazonで購入
What can you say about the Disney animated film of Dodie Smith's classic book. The animated version is far superior to the live action remake and in my own humble opinion is the last of the Disney films which can be described as a classic.
My daughters loved this movie and so do my granddaughters and I must admit that it is no hardship to sit through it again with them when the come to visit.

Meg learner
5つ星のうち5.0 101 Dalmatians - BIG HIT
2010年3月5日に英国でレビュー済み
Amazonで購入
Bought this for my 3-year old granddaughter and it has been a really big hit. As soon as she comes in, she wants to see the "dalamations" and all her toy animals have been transformed into dalmations to try and make them up to the big number of 101.
One useful thing about DVDs is the ability to move back or forward to different scenes and I have found that on this DVD, as with some of the other children's DVDs - certain scenes are watched over and over, while she watches something she particularly enjoys. This also seems to be good for learning about life and motivations.
The villain, Cruella is an absolutely amazing creation. Her driving skills, the car, and her characterisation are all fantastic and the scene near the end where she is driving after the lorry with the pups in it is absolutely fantastic. Some of the puppies, especially Rolly, are also memorable. Some other great characters are Sergeant Tibbs and the Colonel.
Pongo and Perdie are of course the stars of the film and some of the scenes are particularly appealing to children, especially near the start, where Pongo manages to tip both his "pets" into the pond while trying to get them to meet. Another good scene is where Pongo and Perdie are struggling through the snow with the puppies. While I have mentioned these scenes in particular, the whole film is really enjoyable.
The film is now, of course, quite old and the only negative aspect is that Roger smokes a pipe. I mention this only because it is so surprising to see that, these days.