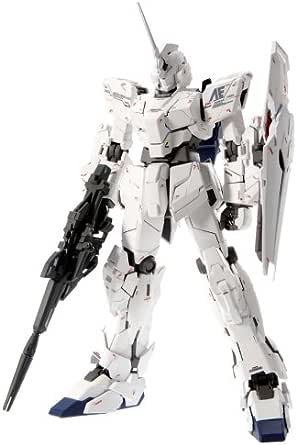 Henry Quinn
5つ星のうち4.0 An awesome kit... But should you buy it?
2015年4月21日にアメリカ合衆国でレビュー済み
Amazonで購入
This is the Ver Ka Unicorn in all of its splendor. Having previously built the OVA version as well, I can say that the two are similar, but have some differences. The OVA Ver. is slightly more flexible in some areas, especially in the legs, but the claims of the Unicorns' "horrible" joints are greatly exaggerated. Keep in mind as well that if you really needed to, it is possible to cannibalise the three parts(thigh armour and hidden calf thruster armour) from the OVA version to give your Ver Ka this extra few degrees of movement, but it's probably easier to modify the Ver Ka itself.

Apart from the joints, aesthetically there isn't too much of a difference. The markings are greatly different and in much vaster quantity, as is to be expected from a Ver Ka. Additionally, the Ver Ka comes with pink beam sabres instead of the OVA's clear blue, and there are some colour differences on the frame, blue feet parts, and weapons. The frame(the gray frame, not the psychoframe) is a noticeably lighter shade of gray and is less metallic, and looks more plastic-y to me. The weapons are also a darker shade of gray(but they'll have to be painted over to complete the look anyway), and the blue parts on the feet are darker as well.

In conclusion; should you splurge and pay the extra money for this instead of the OVA Ver? The answer is... Probably not, unless you know what you're getting yourself into. The two are very similar, with the only real differences being improvements on the newer OVA kit, and the typical(and awesome) Katoki marking set. I'm sure if you looked hard enough on other sites(I'd suggest HLJ or eBay, because a quick search yielded no results on Amazon), you could find a set of waterslide decals from this kit to slap onto the OVA version instead. Quite honestly, I don't regret this purchase, but that's because I bought it expecting exactly what I got. I wanted to buy this kit to help complete my Unicorn collection, and to own a piece of Gunpla history--the Unicorn is truly one-of-a-kind, and when this kit came out it, along with the Nu, Sazabi, and Sinanju Ver Kas, set a new standard of quality for modern Gunpla. The only reason you should ever buy this kit over the OVA version anymore is if you're a collector.
続きを読む
23人のお客様がこれが役に立ったと考えています
違反を報告
レビュー を日本語に翻訳する

Tony Ly
5つ星のうち4.0 Good model, but hard to pose
2018年11月29日にアメリカ合衆国でレビュー済み
Amazonで購入
Fun to build, but articulation and posing is not quite there. The torso joint is loose and the sabers attach very poorly to the back pack. It looks like the RG Unicorn has better detail on the panels and is overall a better designed model, so I would recommend that instead.
続きを読む
違反を報告
レビュー を日本語に翻訳する

John Dandell
5つ星のうち5.0 Excellent model. Difficult Stickers!
2008年6月9日にアメリカ合衆国でレビュー済み
Amazonで購入
This thing has the hardest decals ever, but its not impossible. Most likely you'll lose some decals by messing them up. Thats okay because there are so many on here. The build is freaking amazing. The morph ability could potentially ruin some joints, but I don't care. This was so exciting and rewarding to build. If you paint it, and you should, the Gundam becomes amazing. I don't even watch the TV show or know much about this guy, but I had fun making it one summer. This is probably one of the must have models. I'd say the difficulty is 4/5 but the end results are 5 stars!
続きを読む
5人のお客様がこれが役に立ったと考えています
違反を報告
レビュー を日本語に翻訳する