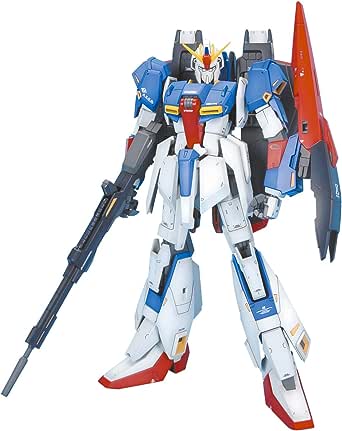 Lukus
5つ星のうち5.0 Great to build and came with with extra gundam launch pad.
2016年10月17日にカナダでレビュー済み
Amazonで購入
As I was building this one, I was not overly fond of how it was coming out, tall and lanky, Once completed with all the parts attached however I had a change of heart. The Stand he came with had a large part to play in that as I can place him in flying poses that complement Zeta.
続きを読む
役に立った
違反を報告
レビュー を日本語に翻訳する

This model kit has a lot of things going for it. First, it includes all the weapons of the Zeta: Beam Rifle, Beam Sabers, Grenade Launchers (with extra ammo), Head Vulcans, and even the ridiculously huge Hyper Mega Launcher that other model kits usually don't come with. The detail of the model is up there; even without paint, it already looks good by itself. It also has the ability to transform into the Waverider mode just like in the anime. The kit comes with its own action base so you don't have to buy one, the base is attachable with the one that comes with the Gundam Mk-II Master Grade. They would definitely look good together. I also found it very poseable in the action base, it is very secure and has little chance of falling off.

There are a few negatives with this model, but I will write on two major issues that most people will find with it. The first is that it is back heavy thanks to the combination of the wings and the way it plants itself into the ground with its feet. It is hard for it to stand on its own, but thanks to the base that comes with it, that shouldn't really be a problem unless you're set on having it stand. The other is the complex procedure of the transformation system into its Waverider mode. It will take time and some parts will definitely come off even with practice. After transforming it once, I think the best solution would be to get another kit to show it in its WR mode. I like to display it in its mobile suit form anyway so this really isn't a problem for me.

Overall, I would recommend this kit to anyone who likes the Gundam franchise or Gunpla in general, but especially to those that favor the Universal Century series. It also simple to assemble and not as hard as you might think, considering the complex transformation. The Zeta Gundam is my favorite mobile suit and this kit definitely gives it justice.
続きを読む
7人のお客様がこれが役に立ったと考えています
役に立った
違反を報告
レビュー を日本語に翻訳する

A Guy
5つ星のうち4.0 Cool, but a bit hard to pose
2019年11月10日にアメリカ合衆国でレビュー済み
Amazonで購入
This model is definitely an improvement over the 1.0 MG Zeta. However, the age of the model does show. The suit has a couple bits that might be too finicky for a new builder, but if you've done an MG before you should be fine.

The transformation gimmick leaves the suit practically hollow, and the backpack does leave it back heavy. The included stand is a required part for sure. It does allow for quite humorous poses and forms you wouldn't find in other models.

The size of the main rifle does cause the arm joint to sag a bit, and it really struggles to hold the Hyper Mega Launcher. Or as I like to call it, the compensation cannon. It's taller than the suit, practically forearm length.
続きを読む
役に立った
違反を報告
レビュー を日本語に翻訳する

Asim
5つ星のうち4.0 Great kit and amazing transformation
2020年2月9日にアメリカ合衆国でレビュー済み
Amazonで購入
You can tell this is a bit of an older kit, not a ton of surface detail which sucks but the zeta gundam is great looking, both in ms and wave rider form. Fun build, and after a couple of attempts the transformation works excellently. Really well designed.
続きを読む
役に立った
違反を報告
レビュー を日本語に翻訳する
その他の国際レビューを読み込む

Bootz
5つ星のうち4.0 A Fine Addition To Anyone's Gunpla Collection
2012年10月26日にアメリカ合衆国でレビュー済み
Amazonで購入
The Master Grade Zeta version 2.0 despite being released in 2005, is formidably engineered and produced so that it even rivals today's master grade kits in terms of gimicks, transformation and ability for posing. In terms of most Gundam Kits, mainly Master Grades and higher up, this one is especially not fit for playing with, rather posing and turning desk space into a little gem of the Universal Century. You will have no issues posing the Zeta Gundam until you feel ambitious to do more advanced poses, in that case, parts may fall of at the drop of a hat. It does get frustrating at times when the shoulder joint pops out at the moment when you are just happy with the pose, same with the hyper mega launcher popping out of the manipulators every once in a while. However, when you achieve an amazing pose, you can't help but marvel at the amazing kit. I highly recommend getting a grey Gundam fine point marker for the white parts besides the head, and a black fine point for the head (it makes it's unique head pop even more) and all other parts; this "one point step" really makes the kit shine aside from topcoating the kit (which a busy Architecture student like myself rarely has time for). All things set aside the kit is overall, very fantastic despite it's age with fantastic posing, great colors. Despite various situations where parts may fall off, the kit will make a great addition to anyone's collection.
続きを読む
4人のお客様がこれが役に立ったと考えています
役に立った
違反を報告
レビュー を日本語に翻訳する

Jeff
5つ星のうち4.0 Not for rookies
2008年12月21日にアメリカ合衆国でレビュー済み
Amazonで購入
Alright first and foremost if you have never built a master grade gundam model kit do not start with this one. It is a very complicated build. There are two primary problems with this kit. One is that it is not extremely sturdy, due to its ability to transform its frame moves and shifts alot. Second is that it is very back heavy and is extremely difficult to get it to stand on its own. However these facts don't turn this kit into a wash. The model itself is huge for a master grade and comes with a lot of cool weapons the least of witch is the hyper mega lanucher, a weapon that is actually bigger than the gundam itself. The model does display very well in an areial pose. Made possible by the display stand the comes with the kit. Once finished the kit looks very good when floating in air holding the extremely cool weapons. If you are a seasoned veteran of the master grade line than go ahead and take on the challange of this legendary mobile suit. Otherwise get your feet wet with some other models first before you tackle this beast.
続きを読む
5人のお客様がこれが役に立ったと考えています
役に立った
違反を報告
レビュー を日本語に翻訳する

Travis
5つ星のうち5.0 If you like zeta then this is the one. And that base tho.
2019年4月18日にアメリカ合衆国でレビュー済み
Amazonで購入
Only thing I hate is the whole transforming into the ship is always a pain so dont bother but he comes with the coolest base I've seen hand down.
続きを読む
役に立った
違反を報告
レビュー を日本語に翻訳する

J. Herbias
5つ星のうち4.0 Zeta Gundam MG 2.0
2011年5月1日にアメリカ合衆国でレビュー済み
Amazonで購入
This is much better than the original Master Grade Zeta Gundam in terms of joints holding up and posability. However, I do have the Hi-Nu Gundam MG and it feels like that model has even stronger joints. One of the arms seemed to sag when I attached the beam rifle to it.

The transformation is still complicated... I found it best to seperate the upper torso from the legs and do the transformations of each individually. But since it's a PITA and there's a chance the joints will get weaker over time, I will probably limit the times I transform it.
続きを読む
3人のお客様がこれが役に立ったと考えています
役に立った
違反を報告
レビュー を日本語に翻訳する