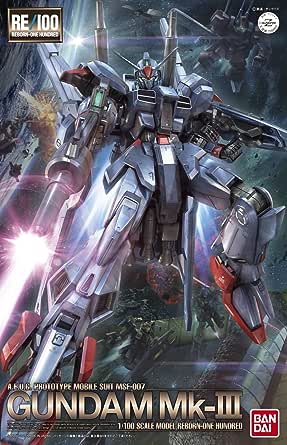 Lukus
5つ星のうち5.0 Great colors.
2017年5月15日にカナダでレビュー済み
Amazonで購入
In spite of this being an RE/100 it, the detail is actually quite good, as is the color. The kit goes together quickly, and after panel lining and painting looks very nice even next to the MG kits.
続きを読む

Kevin Payte
5つ星のうち5.0 Would buy another and then some...
2015年9月5日にアメリカ合衆国でレビュー済み
Amazonで購入
I am very satisfied in my spent, hard earned money on this kit, the Mark-III MS-007 is a fantastic kit. Frankly, it's really hard to nicpick anything wrong about this kit for what it is.

Pros:
+ Great articulation
+ Its overall look is surprisingly pleasing and with panel lining, this model is eye-candy!
+ Limited but very awesome set of weapons, the shield and backpack give it a nice touch
+ Due to its simple color scheme, this model is open to a lot of customization/modifications
+ Not too many stickers and decals, quite a few swap-decals for a different persona ( e.i. the A.E.U.G., etc.)
+ Well-balanced and sturdy, not necessary for a base stand
+ It comes with its own adapter for a base stand (1/100 scale) but doesn't come with a stand.
+ The rifle is just awesome and dual sabers, c'mon!

However, it's not perfect and here some cons (but doesn't drop this kit any less)
- Throughout the assembling process, the parts fit tightly and at times can be a bit of a pain if you screw up. It's a bit stiff once assembled.
- The backpack is a bit loose and often times when you try to pose with it, it'll slip off because of the bulky articulation of its shoulders.
- This is more of a personal peeve but the yellow sticker decal that goes just below the gundam's eyes is just outright ugly. A mustard yellow that just gives it this strange mustard smudge on its face (I personally left those alone).
- The hands, thought lots of options, when gripping it with the rifle or the beam sabers it fits in its slot fine but often times it'll pop loose. The weapons won't stay in place if you move the model too much.

The verdict? Buy it. No, seriously buy it. It may not be a MG but it sure as big as one and even better than the older MGs. I highly recommend this kit to all skill levels of the hobby for gunpla. I first heard about the RE line just months after coming back to gunpla and I wasn't sure what to think of it. But after a few convincing and persuasion, I went ahead and bought it. I am happy with it!

Word of advice: If you're just getting started into gunpla and have built some or several HG models but afraid or intimidated in getting familiar to 1/00 scale MGs, then I highly suggest the RE line (in hopes, Bandai continues this RE more actively). I heard nothing but mostly positive things about the RE line and I'm a believer now with this kit. This kit particularly has a nice refreshing feel for veterans but also has the ease for newly adopted hobbists. Next of plan! Grabbing the GPO4 and maybe Nightingale!
続きを読む

Antknee
5つ星のうち5.0 Great Kit!!!
2015年10月29日にアメリカ合衆国でレビュー済み
Amazonで購入
I was very impressed with the quality and detail from this, my first RE/100 kit. Without being an MG kit, it still has an impressive size and amount of detail on the outer armor. There's no inner-frame, but honestly I can take or leave the frame. It has great stability for display and plenty of articulation. I was pleased with the color (I was worried it was a bit too purple) IRL. After panel lining, hand-painting some detail, and giving it a nice top coat it became one of my recent favorite gunpla.
続きを読む
1人のお客様がこれが役に立ったと考えています
役に立った
フィードバックを送信中...
フィードバックをお寄せいただきありがとうございます。
申し訳ありませんが、お客様の投票の記録に失敗しました。もう一度試してください。
違反を報告
レビュー を日本語に翻訳する

Jhardisty72
5つ星のうち5.0 Great kit!
2020年4月1日にアメリカ合衆国でレビュー済み
Amazonで購入
For me this kit was perfect. It’s not overly complicated but it’s has great detail and it’s primary colors are great. It would still be great with just a bit of panel lining but I decided to paint the vents gold which really seemed to make them pop. I would definitely recommend you attach this to a base.
続きを読む
役に立った
フィードバックを送信中...
フィードバックをお寄せいただきありがとうございます。
申し訳ありませんが、お客様の投票の記録に失敗しました。もう一度試してください。
違反を報告
レビュー を日本語に翻訳する