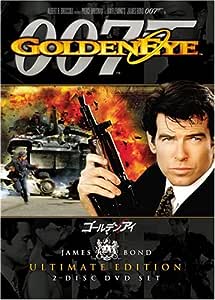 cora
5つ星のうち5.0 Rollicking Good Bond Adventure
2019年1月23日に英国でレビュー済み
Amazonで購入
This is Pierce Brosnan's first outing - and probably his finest hour - as Bond. It's a highly enjoyable flick with a new and sexy Bond, this one with a decided twinkle in his eyes after the rather stern (though equally excellent) Timothy Dalton. There are two very sexy ladies with Famke Janssen and Izabella Scorupco, Sean Bean makes for a memorable villain and Alan Cumming is a real scene stealer as his rather comical henchman. The inimitable Desmond Llewelyn is back as Q and Judi Dench takes over as M. They all work a treat. Samantha Bond, on the other hand, is my least favourite Moneypenny. A bit odd is the appearance of Joe Don Baker (who played the megalomaniac villain in The Living Daylights) in the role of one of Bond's allies. But that's a minor quibble. Tina Turner's theme song is one of the best in the series. Great stunts, great filming locations including the glorious St Petersburg, and the usual fun gadgets make this one of the better films in the franchise.

FJY
5つ星のうち5.0 Brosnan's Best Bond Film
2019年6月15日に英国でレビュー済み
Amazonで購入
Goldeneye was Pierce Brosnan's first Bond film and the first film of the 1990s, after Licence To Kill in 1989. I first saw it at the cinema in 1995 on its original release and thoroughly enjoyed it. I then bought the DVD of the film, watched it and enjoyed it all over again.

Watching it now, though, it appears a bit dated, but it's still one of the best Bond films and is easily the best of the Brosnan era. The film is notable for it's decision to cast a female (Judi Dench) as M, partly due to the PC sensitivities of the time, which still pervade today. Sean Bean is also good as a rogue secret agent and Robbie Coltrane is also amusing as a Russian gangster, as is Alan Cumming, who has quite a large role in the film. The film also has some great stunts and action setpieces, though it isn't as action-packed as others in the series. The theme song by Tina Turner and written by U2's Bono and The Edge is also decent as well.

Potential buyers may also be interested to know that this is the fully uncut version of the film, hence the higher 15 certificate. All this really equates to are a few headbutts during the fight scenes, though, so you shouldn't get too excited at the prospect of seeing uncut material. The material was previously cut by the BBFC, though, so this is as complete a version of the film as you will ever see, in the UK, anyway.

All in all, this is a solid and very enjoyable film. If you haven't already seen it, then I highly recommend a purchase. Brosnan's Bond films went a bit downhill after this one, so it's as good as they got in the 1990s. Five stars from me.

Big Cheese
5つ星のうち5.0 Excellent film - in the top ten of Bond for me
2016年8月4日に英国でレビュー済み
Amazonで購入
If you're a James Bond fan then you probably don't me to re-hash the plot of this film. You'll more than likely know exactly where it sits in your own personal top 20. If, on the other hand, you're not familiar with Bond, or you've just never seen this particular film, then I can certainly recommend it. Goldeneye definitely makes my own top ten of Bond films - possibly pushing the top 5.

For the record - and I'm no expert in the technical side of DVDs - this looked fine, but the sound was a bit off - I had to turn it up quite a bit. Aside from that, I hope that both seasoned fans, and those who are new to Bond will find the following useful and interesting. I've tried not to include any significant SPOILERS but apologies if you think I have - feel free to leave a comment, and I will look at amending what I've put.

There are many things that go to make up a Bond film. Commonly cited are the gadgets, the 'girls' and the theme song. But there is more to it than that. I've always considered the pre-title sequence to be an important element. In this case it's really pretty effective. We're introduced to Pierce Brosnan as Bond for the first time, and we know we're going to have fun with this one, but in a no-nonsense kind of a way.

The opening credits are nothing to write home about as Tina Turner belts out the theme song, doing her best Shirley Bassey impersonation, and it's not too long before we're introduced to the new 'M' played by Judi Dench. The character works, in my view, much better here before it was built up unnecessarily in the Daniel Craig films. Her sparring with 007 seems realistic and enjoyable to watch.

Meanwhile all sorts of shenanigans is going on in Monte Carlo and Russia as the plot really kicks in and we get to know the baddies. They're a good bunch here: a sadistic female former soviet fighter pilot (Xenia Onatopp) who is plainly aroused by killing, a nerdy and arrogant computer programmer, an archetypal Russian general par excellence and finally Sean Bean's slightly unconvincing former '00' agent gone bad.

There's the usual scene with Q as Bond acquires some new gadgets, which in this film are useful rather than spectacular, and an excellent 'car chase' of sorts and a good solid ending, complete with the baddies' hidden lair in an exotic location.

It's always slightly unbelievable how the female characters (Dench aside!) end up falling in to Bond's arms so easily, and this film is no different on that score. But the sort of sexual wrestling that goes on with Onatopp is something of a novel twist. And then there is the other Russian computer programmer - not the nerdy arrogant one - the beautiful female one who becomes Bond's sidekick and lover for the duration of the film. In my opinion she is the best female character in any Bond film - as well as beautiful and intelligent, she is feisty and resourceful, and mostly gives as good as she gets.

All in all, a great film and a great entry in to the Bond canon.

Nicholas Casley
5つ星のうち4.0 "I think you're a sexist, misogynist dinosaur - a relic of the Cold War."
2008年6月2日に英国でレビュー済み
Amazonで購入
Goldeneye is the seventeenth Bond movie in the series, and the first of four with Pierce Brosnan in the lead role. Indeed, it is the best of his four. Following a Scot, an Australian, an Englishman and a Welshman, Bond was now played by an Irishman. In my view, Brosnan was a good Bond, but the lack of control over his part that Dalton insisted upon meant that this and the other three of his movies led to Bond becoming a parody of his true self. Like the final movies of Roger Moore in the role, Brosnan's script emphasised to an absurd degree the superhuman strengths and luck of the part, as well as the equally absurd humour. Humour is good in Bond but it must be a dark and brutal humour to be credible: playing Bond for laughs shows a lack of self-respect for the man. 'Goldeneye' was the one Brosnan movie in which these aspects were most under control.

`Goldeneye' followed a little hiatus of six years since the previous movie, `Licence to Kill'. During that time, the Soviet Union finally came crashing down, and the Bond team had to face the fact that the Cold War was over. There was also a great technical revolution during that time as Bond finally moved into the digital age. As well as a new Bond, there is a new M in Judie Dench, it being a conscious decision to make the female parts tougher. (The title at the head of this review is her description of Bond.) It's over an hour before Bond gets his first kiss.

There were a number of new faces in the Bond production team too, most notably of course the director, Martin Campbell, who contended that, "If we don't get this right, the series is dead." As the extras on the double-DVD show, Campbell is a man with a lot of energy (to put it diplomatically). Other new faces include Daniel Kleinman (for the late Maurice Binder), and Eric Serra doing the soundtrack.

There are the usual amazing stunts (jumping off a dam) and the usual ludicrously unbelievable stunts (freefall to catch up with and steer to safety a plane, tank chase through Saint Petersburg). Bond still escapes a million bullets without a hair falling out of place (but see the note about the censors, below). Thankfully the undercranking of the camera was kept to a minimum, and was not enough to make it obvious.

Despite being only one commentary, there is a generous helping of extras on the double-disc version. In the commentary we learn that the amazing opening dam jump was done for real, was a world record, and was done on the first take: it was the only take! We also learn that Sean Bean himself had once been a contender for the Bond role. I was interested also to learn that the censors do not like to see blood, or to see bullets hitting their mark, but they do not mind high body counts! So my previous gripes about Bond movies should be mostly laid at the censors' door rather than the producers'. (But it would be interesting to see a woman direct a Bond movie.)

There are the usual deleted scenes, anatomies of scenes, location-scouting, model-making featurettes. One of the best is a thirty-minute `Secret File', where you learn the production secret that comprises cat-litter and self-raising flour? There is also a good forty-minute TV special, `The World of 007', introduced by Liz Hurley. It's over-the-top and camp, but features some interesting interviews with the likes of John Barry, Roger Moore, and a variety of actors and production team staff.
続きを読む
3人のお客様がこれが役に立ったと考えています
違反を報告
レビュー を日本語に翻訳する

Alexander1746
5つ星のうち5.0 THERE'S VERY LITTLE TO ADD ABOUT THIS EPIC FILM (ALL IS ALREADY SAID).
2014年7月6日に英国でレビュー済み
Amazonで購入
Without the presence of Alan Cumming this film would be a 100% masterpiece of action. Famke Janssen's character is amazing. Izabella Scorupco was not the best choice but she did what you can expect of a Bond's girl. Judi Dench made her debut as M, Bond's superior. Brosnan made his first stunning appearance as 007. Sadly, this was the last film in the Bond series for special-effects supervisor Derek Meddings, who died in the midst of production. The tank chase is really epic!. This frame-by-frame digital restoration is superb also in dvd with all new Dts 5.1 audio and the special features are also very complete. No doubt, one of the best Bond's films I've ever seen. I strongly recommend to buy this 'Ultimate Edition' (2 Disc Set).
続きを読む
4人のお客様がこれが役に立ったと考えています
違反を報告
レビュー を日本語に翻訳する
すべてのレビューを参照します
トップへ戻る
Amazonについて
Amazonでビジネス
Amazonでのお支払い
ヘルプ＆ガイド
日本語ショッピングのための言語を選択します。 日本ショッピングのための国/地域を選択します。
© 1996-2020, Amazon.com, Inc. or its affiliates