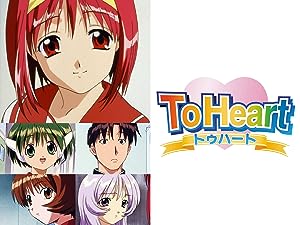 This video is currently unavailable
to watch in your location

4.4 out of 5 stars
4.4 out of 5
17 customer ratings
How does Amazon calculate star ratings?
Amazon calculates a product’s star ratings based on a machine learned model instead of a raw data average. The model takes into account factors including the age of a rating, whether the ratings are from verified purchasers, and factors that establish reviewer trustworthiness.

silky
4.0 out of 5 stars 懐かしい
Reviewed in Japan on May 5, 2014
Verified Purchase
人生で初めてプレイしたギャルゲーのアニメ。

DPW
5.0 out of 5 stars DPW
Reviewed in the United States on August 18, 2009
Verified Purchase
An excellent anime. This anime was produced in the late 1990's and aired in Japan in 1999. It was acquired by Rightstuf and digitalized (checkout their web sight for details of the effort to restore from film). This story is based on a video game that was popular around the time of this programs release.

Each disk has some extras including Line art gallary, Character Bios, Translation notes, Trailers and Mini episodes (minis are only in Japanese language with subtitles). The main episodes do have English language voice track for those of us that hate the aggravasion of reading subtitles.
Disk 1 has four episodes. Disks 2,3,& 4 have three episodes and 2 mini episodes.

I will leave story reviews and art critique to other reviewers I found nothing to complain about. Overall this is the story of High school students and their interactions. Nothing new here, there is a little of everything and it is interesting as a slice of life program. You could argue that there are better and funnier and more exciting anime of this kind available and you can find far worse.
For story and art work 4 stars. For restoration to digital format and providing an English voice track 5 stars.
The box set is a good deal. I hope they can acquire the second season someday.
Also, the studio that made this anime also made Comic Party. You should see that anime as well as Comic Party Revolution. I Think the "Comic Party" anime is a little better than "ToHeart" but that is just my opinion.
Read more
4 people found this helpful
Helpful
Sending feedback...
Thank you for your feedback.
Sorry, we failed to record your vote. Please try again
Report abuse

Bruce Brakebill
5.0 out of 5 stars Keep more on stock.
Reviewed in the United States on December 22, 2018
Verified Purchase
Love the anime wish it had more episodes. Packing was excellent came on time.
Read more

Helpful
Sending feedback...
Thank you for your feedback.
Sorry, we failed to record your vote. Please try again
Report abuse

Sabre
5.0 out of 5 stars Anime review
Reviewed in the United States on November 18, 2012
Verified Purchase
I can say the product did meet my espectations. It's an old anime and comes from another time when anime was just begining in both technology and skill though not as old as some others and plus you hardly get to see this kind of animation. The plot was good in this and it takes you back to another time. Which is why I recommend it.
Read more
One person found this helpful
Helpful
Sending feedback...
Thank you for your feedback.
Sorry, we failed to record your vote. Please try again
Report abuse

Glamazon
5.0 out of 5 stars Quality Anime
Reviewed in the United States on July 24, 2010
Verified Purchase
This anime came in a quality package. It was a hard box with thin dvds placed inside of it. It's very durable. The anime itself is very nice and addicting. You get attached to the characters as they interact with each other in day to day activities. This is a very cute anime.
Read more
3 people found this helpful
Helpful
Sending feedback...
Thank you for your feedback.
Sorry, we failed to record your vote. Please try again
Report abuse

Heath W. Largen
5.0 out of 5 stars Heart-warming Adept of Japan's High School Life
Reviewed in the United States on August 5, 2009
Verified Purchase
"To Heart" is a very good adept of high school life in japan. With the typical high school day to day life, drama, stress, comedy with a few touches of romance. If your looking for your typical romantic comedy this isnt for you. I'm more into the romantic comedy myself but the series had plunty of drama and comedy to keep me going. From my high school point of veiw i never really enjoyed it much. From watching this i wish more schools in america were more like this i would have enjoyed it alot more.
Read more
3 people found this helpful
Helpful
Sending feedback...
Thank you for your feedback.
Sorry, we failed to record your vote. Please try again
Report abuse
Load more international reviews

Electron
5.0 out of 5 stars Five Stars
Reviewed in the United States on August 22, 2015
Verified Purchase
I wanted this DVD for my collection.
Read more
Helpful
Sending feedback...
Thank you for your feedback.
Sorry, we failed to record your vote. Please try again
Report abuse

Knighthawk
3.0 out of 5 stars Not as good as the manga
Reviewed in the United States on January 31, 2013
Verified Purchase
This came on time and in great condition. I don't like the way this ends and it changes things from the manga but it still is a cute anime.
Read more
Helpful
Sending feedback...
Thank you for your feedback.
Sorry, we failed to record your vote. Please try again
Report abuse

KevinB
3.0 out of 5 stars Needs more depth
Reviewed in the United States on September 30, 2012
Verified Purchase
To heart has great potential. But the relationships that the series focuses on never develop far enough to satisfy me. It is a good series but i felt like I was left hanging big time. Maybe I'll To Heart 2 and see if it goes further. But as for this DVD collection. It's ok but not great.
Read more
One person found this helpful
Helpful
Sending feedback...
Thank you for your feedback.
Sorry, we failed to record your vote. Please try again
Report abuse