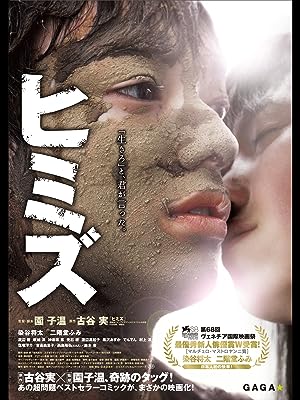 3.6 out of 5 stars
3.6 out of 5
175 customer ratings
How does Amazon calculate star ratings?
Amazon calculates a product’s star ratings based on a machine learned model instead of a raw data average. The model takes into account factors including the age of a rating, whether the ratings are from verified purchasers, and factors that establish reviewer trustworthiness.

The Laughing Man
2.0 out of 5 stars 演技力は素晴らしい
Reviewed in Japan on September 17, 2018
Verified Purchase
二階堂ふみの演技力を評価してる番組でこの映画の事が出ていたので見てみました。
演技力は良かったと思います。

Translate all reviews to English

Tony Glasgow
5.0 out of 5 stars It was worth the money. I plan to watch it again
Reviewed in the United Kingdom on November 9, 2018
Verified Purchase
Enjoyed this dvd very much. Great acting and scenes.
Read more
Helpful
Sending feedback...
Thank you for your feedback.
Sorry, we failed to record your vote. Please try again
Report abuse

Stephane Rousseau
3.0 out of 5 stars Good but less inspired than his previous movies
Reviewed in the United Kingdom on March 7, 2014
Verified Purchase
As in the other Sono Sion recent movies, "Himizu" is Intense and violent, focused on the difficult relationship between the world of adults and the teens. The actors and the cinematography are great but it is not as inspired and delightfully ambiguous as "Suicide Club" and especially "Noroko’s Dinner (Suicide 0)", and not as epic and crazy as “Love Exposure".
Read more
Helpful
Sending feedback...
Thank you for your feedback.
Sorry, we failed to record your vote. Please try again
Report abuse

Graham
5.0 out of 5 stars Five Stars
Reviewed in the United Kingdom on January 23, 2015
Verified Purchase
Enjoyed this film very much. Would recommend it to people who like this sort of genre.
Read more
Helpful
Sending feedback...
Thank you for your feedback.
Sorry, we failed to record your vote. Please try again
Report abuse

A. Tristram
5.0 out of 5 stars Stunning Film
Reviewed in the United Kingdom on June 27, 2012
Verified Purchase
Himizu had it's premiere at the Terracotta Film Festival, in London, back in April. I happened to be there to see the film before but decided, as there wasn't much else to do, to stay on to see this one as well - as it was the last film of the event.... best decision ever!!

The story centres around 2 young school kids trying to cope with life following a natural disaster and both have parents that, basically, don't care what happens to them. Shôta Sometani & Fumi Nikaidô did well with what, at some moments, was a tough emotional storyline (both going on to win an award at the 2011 Venice Film Festival and it's clear to see why). Yuichi (Shôta Sometani) goes through quite a journey, for someone who's only 14/15 years old, over the course of the film and you can sort of understand why he does what he does.

There are other characters that keep the story moving along - these include a group of adults living in tents / shelters near the rental shop, who try and help out, a criminal (Denden, Cold Fish [DVD]) to whom Yuichi's father owes money and of course the parents.

There are dark, violent moments, romance and, thankfuly, comic moments that make the 2+ hours go by quicker then you think - you really get caught up in what's happening in these peoples lives and how they're going to deal with whats coming next.

I can't recommend this one highly enough.
Read more
21 people found this helpful
Helpful
Sending feedback...
Thank you for your feedback.
Sorry, we failed to record your vote. Please try again
Report abuse

HGibson
5.0 out of 5 stars Poignant and a hard pill to swallow
Reviewed in the United Kingdom on August 21, 2012
Verified Purchase
Sono's somewhat twisted message of hope to Japan makes difficult viewing, but if you can stomach some genuinely distressing scenes - Himizu offers a genuinely compelling story. Both story and characters are tragic to a degree of being darkly comic, I've never seen so many people get slapped around before!
Yuichi's world is falling apart and despite his desire to be a good person, there lurks inside him a hunger of self destruction, fed by his mother's ambivalence and one fateful night with his father, Yuichi becomes a danger to society - an almost damning reflection of modern Japan, where we all too often see incidents of indiscriminate stabbings in the streets.
Keiko's own tragic circumstances cause her to feel a compulsion and desire to be wanted by those who would turn her away (to a sadistic degree with her parents) and thus she is drawn to Yuichi, who himself doesn't want complications in life. She persists in offering herself to Yuichi and may ultimately act as a catalyst to his salvation.
The Tohoku earthquake merely acts as a vehicle to reflect the breakdown in society, and in Sono's warped manner you can expect something that will leave a lasting impression.
The music, and ending scenes in particular are especially poignant - with solid acting all around.
I recommend Himizu
Read more
5 people found this helpful
Helpful
Sending feedback...
Thank you for your feedback.
Sorry, we failed to record your vote. Please try again
Report abuse

Crab0021
5.0 out of 5 stars Sono Sion delivers a mighty punch with Himizu
Reviewed in the United Kingdom on August 22, 2012
Verified Purchase
Sono Sion is easily one of the most exciting, if not THE most exciting director working in Japan currently. His catalog of films have brought some of the most powerful movies I have ever experienced, and once again, Himizu delivers the goods.

The film is a journey, that is in parts melancholic, funny, disturbing, playful, repulsive and ultimately redeeming. The two young leads certainly do deserve the hype around them, their performances are outstanding. As with most Sono Sion films, viewers must be warned against some of the content of the film, a lot of it darker than the average viewer would want to subject themselves to. And yes, as in one review, there is violence against women/domestic violence, but nothing as bad as other Sono Sion films such as "Strange Circus" or the recent "Guilty of Romance".

However, for fans of Sono Sion, this is definitely worth checking out. For those who haven't seen a Sion film before, I'd recommend starting with Love Exposure and working your way up to this one- this being a much darker and disturbing film.

Anyway, I love this movie. It is very stimulating viewing and has a rewarding and powerful resolution. If this kind of movie is your thing, go for it, if not, maybe avoid it.

As far as the actual blu ray is concerned, once again Third Window provides an excellent transfer picture and sound-wise, and the extras are fascinating.
Read more
5 people found this helpful
Helpful
Sending feedback...
Thank you for your feedback.
Sorry, we failed to record your vote. Please try again
Report abuse

DeeJayAlex
5.0 out of 5 stars I love this film
Reviewed in Canada on November 17, 2015
Verified Purchase
Very well acted, and shot. I love this film.
Read more
Helpful
Sending feedback...
Thank you for your feedback.
Sorry, we failed to record your vote. Please try again
Report abuse

Moschops72
4.0 out of 5 stars Disturbing but rewarding
Reviewed in the United Kingdom on August 1, 2013
Verified Purchase
Another good film from this director. Its a dark drama which can be difficult to watch as it is very desperate and offers little in the way of optimism. Its well shot, acted and scored. Also worth checking out are Cold Fish and Guilty of Romance.
Read more
Helpful
Sending feedback...
Thank you for your feedback.
Sorry, we failed to record your vote. Please try again
Report abuse
Load more international reviews

Satoka Sogame
5.0 out of 5 stars Best movie ever.
Reviewed in the United Kingdom on July 18, 2014
Verified Purchase
It was really good movie ever! I watched it in Japanese only, sometimes I had a trouble to catch the voice clearly, but anyways, it was very good, best ever. Beautiful music, impressive scenes, expressive voice and acts. The topic of this movie is very depressive, but at the end of it, you will be able to get some warm feelings from it. I strongly recommend it to you.
Read more
One person found this helpful
Helpful
Sending feedback...
Thank you for your feedback.
Sorry, we failed to record your vote. Please try again
Report abuse

Maria Cristina Perez Martin
1.0 out of 5 stars Weird
Reviewed in the United Kingdom on April 16, 2015
Verified Purchase
I didnt like this film at all, completely unrealistic and crazy, i didnt enjoy seeing the main character beating up his female friend every time he was having a hard time (most of the film). I couldnt relate or understand the behaviour of any of the characters. I disliked the main male character and the girl was so annoying...
Read more
2 people found this helpful
Helpful
Sending feedback...
Thank you for your feedback.
Sorry, we failed to record your vote. Please try again
Report abuse

Harlequin
1.0 out of 5 stars Really unpleasant
Reviewed in the United Kingdom on August 10, 2012
Verified Purchase
Himizu (meaning Mole) is a story of two teenagers living with the aftermath of the fukushima Tsunami that destroyed large parts of coastal Japan. The film is 129 minutes long and stars Fumi Nikaido and Shota Sometani (who was also in Isn't anyone alive??) Keiko (Fumi) is a self admitted stalker of Yuichi (Shota) and hangs on his every word and has them plastered all over her walls in her bedroom.

Yuichi has a drunk father and a mother who eventually runs off leaving him to run a dilapidated shack that is a boat house renting boats to fishermen by the hour. Keiko decides to quit school to help run the boathouse but yuichi resents her "interfering" I have deliberately kept this description short as you will see why in the next section

I have given this just one star as I just could not relate to yuichi at all as he comes across as a worthless loser and a moron and really unpleasant disgusting violent thug so WTF Keiko sees in him is insane.

This film is also destined to either go into the "trade in" pile or will be scrapped as I could not bring myself to get to the end of this really repugnant film all due to the violence Yuichi gives to Keiko. Keiko is a lovely warm caring sweet girl who has crush on Yuichi and only wants to do things to please him

I really did not like the fact that Yuichi took every opportunity to beat up Keiko hitting her punching and kicking her when all she wanted was to help him and be with him and those around him did not lift a finger to stop him hitting her OR help her. Violence against women is totally repugnant to me and I just could not watch this filth anymore. As far as i am concerned she should have shot him in the head at the earliest opportunity
Read more
8 people found this helpful
Helpful
Sending feedback...
Thank you for your feedback.
Sorry, we failed to record your vote. Please try again
Report abuse