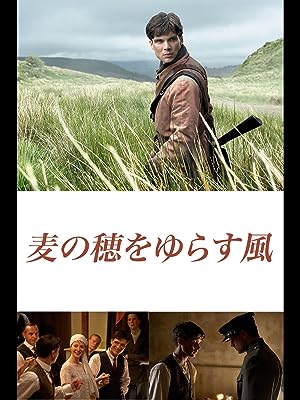 This video is currently unavailable
to watch in your location

4.4 out of 5 stars
4.4 out of 5
507 customer ratings
How does Amazon calculate star ratings?
Amazon calculates a product’s star ratings based on a machine learned model instead of a raw data average. The model takes into account factors including the age of a rating, whether the ratings are from verified purchasers, and factors that establish reviewer trustworthiness.

Clifford W. Donnelly
5.0 out of 5 stars A Thought Provoking Film.
Reviewed in the United Kingdom on December 13, 2017
Verified Purchase
Yet another great film by director Ken Loach.
The film tells the story of the conflict in Eire between the occupying British and the indigenous people of Ireland. It is set in 1920.
Again, it shows man's inhumanity against his fellow man. There were atrocities committed by both sides, but it shows just what utter contempt ordinary soldiers had for the ordinary Irish man and woman.
I suspect that if you're unfamiliar with the Irish accent, then you may struggle to understand some of the dialect at times, but it is well worth the effort to sit through it.
It is a very thought Provoking film.
Read more
23 people found this helpful
Helpful
Sending feedback...
Thank you for your feedback.
Sorry, we failed to record your vote. Please try again
Report abuse

cora
5.0 out of 5 stars Ken Loach's Masterpiece about Two Brothers Caught Up in the Irish Fight for Freedom
Reviewed in the United Kingdom on June 8, 2017
Verified Purchase
The Wind That Shakes the Barley (Two-Disc Special Edition)[DVD] (2006)
First off a few words about the two-disc edition: Disc one contains the feature film and an optional feature length commentary by director Ken Loach and historical advisor for the film Donal O'Driscoll, a history lecturer at the University of Cork. Disc two contains a trailer, a photo gallery, and a 45 minute featurette about Ken Loach. This latter is interesting for fans of the director, and while it does feature this particular film and several snippets from interviews with Cillian Murphy, it is not exclusively dedicated to it.

The film is Ken Loach's Palme d'Or winning film about the struggle for Irish independence. Initially the Irish are fighting the British forces, trying to drive them out of Ireland, but when the Anglo-Irish Treaty of 1921 is signed, it drives a wedge between the Irish themselves. Loach depicts this very cleverly and clearly by choosing to tell the story of two brothers, Damien (Cillian Murphy) and Teddy (Pádraic Delaney), one an ardent IRA member, the other more reluctant until he witnesses several atrocities of the British forces at close quarters. After the treaty, these two brothers find themselves on opposite sides, Teddy accepting the terms of the freestate, pledging allegiance to the King, and Damien bitterly opposed to it and determined to fight on for an independent Irish republic.

The acting is very good all round, with Cillian Murphy giving one of his most compelling performances ever. Also worth a special mention is Liam Cunningham. The cinemtography is breathtaking and the picture quality of the DVD does it full justice. The only small criticism I have is that the sound level of the dialogue is at times so low as to make it impossible to understand it. This is not only a problem with the particular DVD I purchased, I have noticed the same when watching the film on TV. Fortunately there are optional subtitles available for those who need them. They may also come in handy for viewers who have trouble with the Irish accents. For those who don't, the soft Cork accents are a real bonus and add some valuable local colour.

Not an easy film to watch with its scenes of violence and executions, but worth persevering.
Read more
19 people found this helpful
Helpful
Sending feedback...
Thank you for your feedback.
Sorry, we failed to record your vote. Please try again
Report abuse

Paly
5.0 out of 5 stars The Irish fought for 1000 years to be free of the Occupation of their country.
Reviewed in the United Kingdom on September 2, 2018
Verified Purchase
And they won. They beat the British at their own game. As Tom Barry, West Cork Flying Column commander famously said: "They said I was ruthless, daring, savage, blood thirsty, even heartless. The clergy called me and my comrades murderers; but the British were met with their own weapons. They had gone in the mire to destroy us and our nation and down after them we had to go.” If you'd like to understand his words; watch this movie. If non-Irish imagine Hitler's Nazi Army invading Britain in WW2. Churchill stated if that happened Brits would use EVERY means at their disposal, to quite rightly - kick them out. "We'll fight them on the beaches, in the streets and in the Hills; we will NEVER SURRENDER!" He was right except only in so far as the British Empire and Elites are concerned. No other oppressed or Militarily Occupied Nations are allowed to do the same; Palestine for one but there are many others especially in Africa and S America. The valiant Irish thought otherwise however, and fought back; never SURRENDERED. Soon Ireland, thanks to Brexit, will be one nation again - unless the Tories/DUP can wreck it. We'll see about that. Thanks Mr. Loach. Your films are always very good. You have a social and moral conscience; wish everyone did.
Read more

Prof DBG Heuser
5.0 out of 5 stars Extremely naturalistic and sensitive portrayal of the wars of Irish independence
Reviewed in the United Kingdom on August 8, 2019
Verified Purchase
An outstanding film, probably one of my top 20 war films. A very moving and fair representation of what life was like during the bloody conflict of 1919-1923. Illustrates beautifully how one could be drawn into the conflict by circumstances and against one's will. The naturalism is stunning and original - people really speak as in reality, sometimes all at once, or very haltingly, which gives this film an amazingly realistic touch. Excellent acting. Ken Loach at his best.
Read more
2 people found this helpful
Helpful
Sending feedback...
Thank you for your feedback.
Sorry, we failed to record your vote. Please try again
Report abuse

Amazon Customer
4.0 out of 5 stars Very enjoyable, good account of the time.
Reviewed in the United Kingdom on October 26, 2017
Verified Purchase
I would have given the film 5 stars as it gave a very accurate account of the times, but the sound quality was not great. I had to turn the sound level on my TV up to level 35. The film gave a good account of the brutal treatment that was all too often handed out by the "tan's" and the deception of the brothers fighting each other after the treaty gave a taster of the horror of the civil war period. Overall a good film about the period.
Read more
6 people found this helpful
Helpful
Sending feedback...
Thank you for your feedback.
Sorry, we failed to record your vote. Please try again
Report abuse
Load more international reviews

Wessex Woman
5.0 out of 5 stars Troubles and Brutality in Rural Ireland as it strives to have autonomy from the UK
Reviewed in the United Kingdom on August 23, 2019
Verified Purchase
This film was very well acted, directed brilliantly by Ken Loach and brings to life for anyone interested in the history of the Republic of Ireland the awful family divisions and brutal conflict of the British military occupation 1919 - 1923. Not an easy watch for a cosy night in but very well worth viewing.
Read more
2 people found this helpful
Helpful
Sending feedback...
Thank you for your feedback.
Sorry, we failed to record your vote. Please try again
Report abuse

teldog666
4.0 out of 5 stars The Fight For Ireland's Freedom!!!!!
Reviewed in the United Kingdom on March 22, 2020
Verified Purchase
What A Brilliant Movie With A Great Story Line Showing How The "BLACK & TAN'S" Were Sent Over To IRELAND As "PAID MERCENARIES" To Cause Chaos Amongst The People of IRELAND And, How A Fearless But Few Bunch Of Ordinary People Stood Up Against The BRITISH OPPRESSION And, Fought Back In Resistance During The IRISH WAR OF INDEPENDENCE, "TIOCFAIDH ÁR LÁ", SAOIRSE do h-EIREANN S' "THIG AN LATHA AGAINN" SAORSA do h-ALBA!
OUR DAY WILL COME, FREEDOM FOR IRELAND and
OUR DAY WILL COME, FREEDOM FOR SCOTLAND! A Story Of Love, Passion, Patriotism and An Undying Fight For Freedom and Nationhood! ⭐⭐⭐⭐⭐
Read more

Helpful
Sending feedback...
Thank you for your feedback.
Sorry, we failed to record your vote. Please try again
Report abuse

Monster D.
1.0 out of 5 stars Not for me.
Reviewed in the United Kingdom on July 22, 2019
Verified Purchase
Thought the acting in this was pretty amateurish.This type of story has been done better in many other films ,documentaries and plays and the dialogue unfortunately is unintelligible a lot of the time . Add to this that the direction of the story can be forecast from the first minute. Found it hard to give this any stars. very, very, poor in my humble opinion.
Read more
Helpful
Sending feedback...
Thank you for your feedback.
Sorry, we failed to record your vote. Please try again
Report abuse

R. Robinson
5.0 out of 5 stars the facts give food for thought
Reviewed in the United Kingdom on January 8, 2019
Verified Purchase
this account gives the facts regarding the Irish troubles . A sense of deep shame should be felt by all
Read more
One person found this helpful
Helpful
Sending feedback...
Thank you for your feedback.
Sorry, we failed to record your vote. Please try again
Report abuse

Sofiegalga
5.0 out of 5 stars Good film - worth a watch
Reviewed in the United Kingdom on October 26, 2018
Verified Purchase
Just loved this film. Saw it when it first came out but had another look as I have just done a course in Irish history. Still as good on a second viewing.
Read more
One person found this helpful
Helpful
Sending feedback...
Thank you for your feedback.
Sorry, we failed to record your vote. Please try again
Report abuse

Mr. Patrick W. McCabe
1.0 out of 5 stars Very poor quality.
Reviewed in the United Kingdom on January 29, 2020
Verified Purchase
I was very disappointed with this DVD. Two thirds into the film, the picture kept freezing.

As this was bought for a family member, I was so embarrassed when the family watched it just after Christmas.

When I asked for it back to have it returned, I was politely told to forget about it.

simon
5.0 out of 5 stars Good
Reviewed in the United Kingdom on December 24, 2019
Verified Purchase
Delivery was quick and on time, it was a gift for a family member, but they seem to like it and said it's great.
Read more
Helpful
Sending feedback...
Thank you for your feedback.
Sorry, we failed to record your vote. Please try again
Report abuse

Amazon Customer
4.0 out of 5 stars Four Stars
Reviewed in the United Kingdom on July 23, 2017
Verified Purchase
A good film giving a unique perspective of the fledgling IRA. Cillian Murphy has always is superb.
Read more
2 people found this helpful
Helpful
Sending feedback...
Thank you for your feedback.
Sorry, we failed to record your vote. Please try again
Report abuse