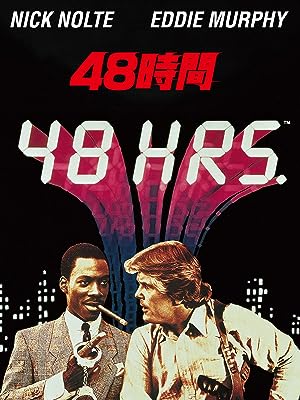 gary atkinson
5つ星のうち5.0 Old
2018年9月21日に英国でレビュー済み
Amazonで購入
sometimes you forget how good some of these older movies are. I had not seen for years really enjoyed watching again.
続きを読む
3人のお客様がこれが役に立ったと考えています
違反を報告
レビュー を日本語に翻訳する

P. A. Boyce
5つ星のうち4.0 Classic Eddie Murphy from the 80's.
2013年4月2日に英国でレビュー済み
Amazonで購入
I hadn't seen this in years and only really got it because I'm a fan of Murphy's, but I was glad I did because I'd forgotten just how good it is. Murphy is great in his breakout performance as a convict released for 48 Hours to help Nolte's cop track down one of his old partners who's escaped from prison and is after Murphy's long waited for stash of stolen money. I don't usually like Nolte's work, with the exception of Cape Fear, but he gives a surprisingly good performance as the violent, bad tempered maverick cop who's forced to work with a smooth talking convict. James Remar is at his best as the vicious escaped convict who seems to enjoy killing cops more than having sex, oh well whatever gets you off, and watch out for Star Trek the Next Generation's Denise Crosby in one of her earlier roles.
続きを読む
違反を報告
レビュー を日本語に翻訳する

Peter Oscarson
5つ星のうち5.0 A true action classic.
2015年3月11日に英国でレビュー済み
Amazonで購入
A great action movie . If you have not seen this I truly recommend it. Perfect picture and sound quality. I must first give my salute to Walter Hill Who co-vrote the script (with Roger Spottiswoode) and directed the Movie. The dialogue is outstanding, rough, tuff, yet funny and smart with Nick Nolte and Eddie Murphy who delivers something extra to their roles. A must see movie. To bad that the only extras is the trailer for the movie.
続きを読む
1人のお客様がこれが役に立ったと考えています
違反を報告
レビュー を日本語に翻訳する

Inspector Gadget
5つ星のうち4.0 48 HRS.
2012年11月14日に英国でレビュー済み
Amazonで購入
One of the great buddy films of the 80's which has a lot of wit, humour and action. Eddie Murphy and Nick Nolte do a great job portraying crook and cop who are forced into working together as they both have information to help each other out. This film is an entertaining watch, well worth the time. The Blu ray transfer is ok, but the quality of the storytelling makes up for the shortfall.
続きを読む
違反を報告
レビュー を日本語に翻訳する