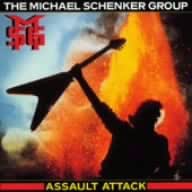 Franco Mercado
5つ星のうち5.0 Sound and performance is first class!
2019年6月20日にアメリカ合衆国でレビュー済み
Amazonで購入
This 2002 EMI Japan import sounds fantastic! This came to me complete with OBI in mint condition. A have a particular fondness for this album ever since I first heard it. Graham Bonnets only release with MSG. The performance is stellar, and I feel that it is Michael Schenkers cleanest sounding album. Chris Glenn shines on bass, but Ted McKenna on drums rocks! Schenkers playing is first rate. My favorite songs are Samurai, Desert Song, Broken Promises, and Searching for a Reason. Includes the bonus track.
続きを読む
違反を報告
レビュー を日本語に翻訳する

Darth Pariah
5つ星のうち5.0 Sadly overlooked
2008年11月4日にアメリカ合衆国でレビュー済み
Amazonで購入
It is a shame that one must get this on import here in the U.S. I have owned it on LP and cassette, but not on CD until now.

This is a sadly-overlooked album by a sadly-overlooked guitar wizard. One would have thought that Michael Schenker's connection to brother Rudolf's band, Scorpions, would have raised his profile here, but it was not to be. Even during the '80s shred mayhem days, the German Flying V master who helped pioneer the genre didn't get the credit he deserved. He should be up there with Iommi, Blackmore, Vandenberg, Malmsteen and Moore.

There is not a bad song on here. The title song and "Samurai" (my favourite) are very heavy, and even the hit single (in Europe), "Dancer," has plenty of heft along with melody. "Ulcer" should be required listening for students of rock guitar.

It's too bad Michael wasn't able to hold this band together. Many know of Graham Bonnet's sacking after his sole live appearance at Britain's Reading Festival, which was unfortunate, because he wails on this album, just as on Rainbow's "Down To Earth". Cozy Powell (RIP) is missed, but Ted McKenna has nothing to apologise for. Chris Glenn slots in nicely on bass, and Tommy Eyre provides just enough keyboards - not overdone, not underdone.

If you're a fan of European melodic heavy metal, this is indispensable. Also get Schenker's first two albums, his work with UFO, the Scorps' "Lonesome Crow" and "Lovedrive."
続きを読む
8人のお客様がこれが役に立ったと考えています
違反を報告
レビュー を日本語に翻訳する

Mark H.
5つ星のうち4.0 Why love me....then go...
2010年7月7日にアメリカ合衆国でレビュー済み
Amazonで購入
This record has much to recommend it to the diehard vintage hard rock fan. The songs are well constructed, the playing is impeccable and the production values are stellar (courtesy of legend Martin Birch). Most Michael Schenker fans consider `Assault Attack' to be his magnum opus. So why am I not in love with this album? Is it because I'm not a real big fan of Graham Bonnet; didn't like him in Rainbow and his voice does nothing for me in MSG. Also except for maybe the title track, there isn't a song on hear that I would out over any of my favorites from the first two LPs. There are some very choice cuts here including the aforementioned "Assault Attack", "Samurai" and "Desert Song". "Dancer" is unabashedly pop which is fine and "Rock You to the Ground" and "Broken Promises" are both decent blues work outs. I may be in the minority here but `Assault Attack' just doesn't fire me up. Gary Barden? Well he returned for the follow up to `AA' and the results were further mixed. If you ignore my bias against Graham Bonnet then you are probably in the group that puts `Assault Attack' on a pedestal and again I can't argue with you over its considerable merits. However my heart won't let me do that. Sail ships across the desert if you like but I Want More...
続きを読む
3人のお客様がこれが役に立ったと考えています
違反を報告
レビュー を日本語に翻訳する

Pablo De Sevilla
5つ星のうち5.0 Kick me in my head!
2001年10月13日にアメリカ合衆国でレビュー済み
Amazonで購入
This album first came out in a storm of controversy. Could Bonnet write lyrics? How would Schenker cope with a vocalist so different to Barden. Rumors of Bonnet drinking and being unable to learn the lyrics of the Barden-era songs. And after a bad warm-up gig, Bonnet is fired. Hence the credit on the album to "Gary Barden for the future" (rehired to MSG)
However, what resulted from the short Schenker-Bonnet liaison is an album that stands the test of time incredibly well. Martin Birch's production is spot on and gives Schenker's music an aggressive and heavy feel lacking from Glover and Nevison's efforts on the first two MSG albums. McKenna is excellent (Cozy Powell never got as good production as this), some amazing Glen basslines come through (listen to broken promises), and Bonnet - well he's Bonnet. Either you love his leather lungs style or hate it. The lyrics are a weak point but are quirkily bad, and so, in their own way classic. "You put me down / that's what I said / you put me down and then you kick me in my head" being a classic example. Or "The women scream as the camels run". And Schenker - just amazing and like everyone benefiting from Birch's production.
All in all, well worth getting on import. Also on the import version, a 9th track not previously available "Woman from uptown" which is as good as the others on the album.
Not perfect, but still a classic.
続きを読む
8人のお客様がこれが役に立ったと考えています
違反を報告
レビュー を日本語に翻訳する