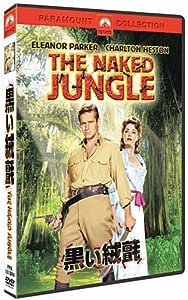 Gerda Eeckelaert
5つ星のうち5.0 Great classic movie!
2013年1月2日に英国でレビュー済み
Amazonで購入
I saw this movie for the first time on tv many years ago and will never understand why it is not aired more frequently.
It's an absolute must-have for every Heston fan and highly recommended for everyone who likes good old-time drama.
続きを読む
役に立った
フィードバックを送信中...
フィードバックをお寄せいただきありがとうございます。
申し訳ありませんが、お客様の投票の記録に失敗しました。もう一度試してください。
違反を報告
レビュー を日本語に翻訳する

Maisie Katt
5つ星のうち4.0 the Naked Jungle
2014年4月17日にカナダでレビュー済み
Amazonで購入
It was an old movie I saw decades ago and knew I would enjoy it again. The story line was light, but romantic
and Heston as a plantation owner ordering a mail-order bride and she was lovely but married before and
he was sending her back.....stupid as men can be! BUT the ants got there first and the story line changed
and I think anybody would enjoy the sexual tension now wouldn't you????
続きを読む
役に立った
フィードバックを送信中...
フィードバックをお寄せいただきありがとうございます。
申し訳ありませんが、お客様の投票の記録に失敗しました。もう一度試してください。
違反を報告
レビュー を日本語に翻訳する

Darth Maciek
5つ星のうち4.0 Film about a bad Amazon experience - a guy buys supposedly new stuff but in fact it is used, albeit in good condition...)))
2013年9月10日に英国でレビュー済み
Amazonで購入
This is a surprisingly interesting "oldie but goldie" movie and a very honest watch - not a masterpiece, but a good, solid adventure/drama film. Below, more of my impressions, with some SPOILERS!

The story happens in 1901, somewhere in the deep jungle in high Amazon wilderness. In the short story which inspired the scenario of this film ("Leiningen versus the ants" by German writer Carl Stephenson, published in 1937), the action was happening in Brazil - here however the country is not defined and local Indians speak only native languages, not Portuguese or Spanish. However the name of the country is not so important here - what matter is that the place of action is situated in the middle of extremely hostile jungle, where modern civilization exists only in the residences of owners of great plantations. Everywhere else is the primal forest, great rivers and swamps.

In this wild country a white American named Christopher Leiningen (Charlton Heston) arrived once twenty years ago as a young man owning virtually nothing. With his own backbreaking labour and iron determination he first created a little cocoa plantation. Then, thanks to his charisma, business skills and ruthlessness he transformed this little estate into a giant plantation which employs many hundreds local Indians - and as his little kingdom expands, more and more Indians come from the Amazon jungle to take jobs and move to the villages he build for his workers. Leiningen lives alone (with just a handful of servants) in a huge, luxurious manor he erected in the middle of his plantation - from there he manages his estates and rules other the whole area as a feudal lord.

But after building his empire, Leiningen wants finally to marry and have a family. He wants an American wife, but refuses to leave his kingdom for courtship - instead he charges his brother and his attorneys in USA to buy him a mail-order bride according to his specifications. As Leiningen's ego is as immense as his fortune, so are his requirements for his future wife. The film begins at that moment, with the arrival at the plantation of the recently purchased Mrs Leiningen (Eleanor Parker).

The greatest value of this film resides in the extremely uneasy relationship between those two recently married people who never saw one another before. Leiningen is a despot, used to order people around and expecting a total obedience in everything - he is comletely not used to the presence on his side of a person who is NOT a subaltern or an employee but an equal partner. Mrs Leinington is an even more complex person. Even if for all practical purposes she sold herself, she has a great, calm dignity. She is also resolved to hold her end of the bargain and she wants to "be a good wife", but her husband will not make it easy at all... There will be quite a lot of drama - and also some destroyed furniture and crockery... And then, there are also all the HUGE skeletons waiting to walk out of the closets - on both sides of this relation... And once they are out, trumpeting elephants will parade in the middle of the room at every moment and refuse to leave...)))

Both main actors are excellent in this film. Charlton Heston was always a very powerful physically actor but in this beginning of his career he was also extremely handsome - and that certainly doesn't hurt this film. Eleanor Parker was also a very beautiful woman and a good actress with it - she played her character very impressively.

As signalled before, at one moment a new factor will appear in the equation - the "marabunta", otherwise known as legionary ants. For the needs of this film (as in the original story) those very real creatures were significantly "upgraded", to make them more lethal... Will their appearance achieve to destroy the already greatly fragilised marriage? Well, you will have to discover it by yourself.

Bottom line, this is a good, solid film, very pleasant to watch, with some quite unexpected surprises waiting to jump at us. Not a great masterpiece, but definitely worth seeing. I will keep my DVD for a possible future re-watch. Enjoy!
続きを読む
4人のお客様がこれが役に立ったと考えています
役に立った
フィードバックを送信中...
フィードバックをお寄せいただきありがとうございます。
申し訳ありませんが、お客様の投票の記録に失敗しました。もう一度試してください。
違反を報告
レビュー を日本語に翻訳する

Chris White
5つ星のうち4.0 An Older Short Story that is Still Viable
2014年5月4日にカナダでレビュー済み
Amazonで購入
Excellent choice of players (although Chucky over plays his part as usual) with a gorgeous Eleanor Parker as well. Story pretty much follows Leningen Versus the Ants that I read in Grade school.
Good action sequences and a happy ending round out the mix.
Probably no one under 50 would watch this movie - no sci fi, whiz bangs or gadgets, just a good story.
続きを読む
役に立った
フィードバックを送信中...
フィードバックをお寄せいただきありがとうございます。
申し訳ありませんが、お客様の投票の記録に失敗しました。もう一度試してください。
違反を報告
レビュー を日本語に翻訳する