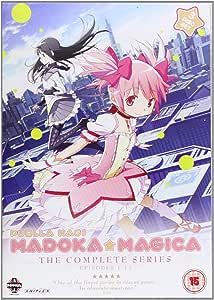 T. Alexander
5つ星のうち5.0 A truly great series
2012年11月2日に英国でレビュー済み
Amazonで購入
Madoka Kaname is a regular schoolgirl but her life is changed when she meets the strange creature called Kyubey who gives her and her friend Sayaka Miki the chance to have a single wish granted in exchange for becoming Magic Girls who fight Witches. Madoka must wrestle with this choice while discovering the perils Magic Girls must face.

'Puella Magi Madoka Magica' is a brilliant show and definitely ranks amongst my five favourite anime series. The series is often compared to 'Neon Genesis Evangelion' and it is a rather apt comparison, and like that series it is something of a love it or hate it type of show. This series is a little difficult to talk about without spoiling at least some part of the story so anyone who wishes to avoid spoilers probably shouldn't read any reviews.

'Madoka Magica' is somewhat darker in tone than is usual for a Magic Girl series (as you would expect from a show that includes 'Faust' amongst its inspirations) but it is done extremely well with a good build up, as well as a nice and emotional finale. The animation of the series is very good with a great mixture of animation styles, especially when the characters enter a Witches Labyrinth where it can get a little trippy. The soundtrack used in the series is also extremely good. The series uses a number of the usual Magic Girl clichés but tends to twist some of them in different ways.

I have seen this series in both Japanese and English now, and I must say that they are both reasonably good even if the English one takes a little getting used to after watching and enjoying it in Japanese. The voice actors for the English dub are generally good and they all suit their characters well, although I will admit that I was originally a little disappointed by Cassandra Morris as Kyubey but I soon got used to it and now think she did a great job.

If I had a criticism of the show it would be the usual one for twelve episode series, namely that there probably isn't much time to develop some of the characters. While this is true, the series does its best and there are some nicely done character moments for the main characters even if some of the secondary characters get a little side-lined.

'Puella Magi Madoka Magica' is arguably one of the most popular anime series of the last few years and I feel that it certainly deserves this popularity. The series is definitely a must see for any anime fan and one that is worth nothing less than five stars.
続きを読む
16人のお客様がこれが役に立ったと考えています
違反を報告
レビュー を日本語に翻訳する

Joshua
5つ星のうち5.0 One of my favourite Anime series
2018年10月25日に英国でレビュー済み
Amazonで購入
Madoka Magica has a story-line that will surprise you, with the twists and turns present in the show (episode 10 in particular is especially brilliant with subverting your expectations) and on top of that, it is gorgeously animated, has incredibly trippy and creative visuals (whenever the characters enter the labyrinth) and it's only 12 episodes long, so for these reasons, I definitely think it's a good starter Anime for somebody who wants an entertaining and unpredictable story-line, that doesn't take long to finish.

Also, even though it's 15 rated, I believe it's only because of 1 episode, but the rest of it is 12 rated. The series looks fantastic on Blu-Ray, so seeing it in HD is a must.
続きを読む
違反を報告
レビュー を日本語に翻訳する

D. P. Flanagan
5つ星のうち5.0 Magical
2013年1月27日に英国でレビュー済み
Amazonで購入
Hello and welcome to a review of a beautifully crafted story of innocence, deception and sacrifice.
I'm not one much for writing reviews so this will be short.
I started watching this show not knowing any of the spoilers, which is a good thing since the first impression was artsy stuff but trite.
I was soon proven wrong, this show turns the magical girl Anime completely on its head and gets increasingly dark with some excellent story telling.
I can not recommend this highly enough.
続きを読む
15人のお客様がこれが役に立ったと考えています
違反を報告
レビュー を日本語に翻訳する

Dr Gonzo
5つ星のうち4.0 Great, if not a bit overhyped
2013年1月2日に英国でレビュー済み
Amazonで購入
I personaly enjoyed this series, it was very entertaining but the hype uilt up my expectations to enormous heights, only for those expectations to fall flat on their face.

Now this series is in no ways bad, I enjoyed it but hype was not the only thing.

The biggest part about this series was the twists and if you know some of them, it will definitely hinder your experience watching this show.

Overall, the show was good but it would have been better if I went in blind about it. Also, as most people know, the show does make a big twist in tone early on in episode 3, that's all I can say.

The release has to be the best so far. Every country in the world who has Madoka, has it in volumes, now those volumes do come with some cool stuff but if you just want the show in a nice, sturdy sleeve, this is the best release for you, and it is limited so if you want it before it's in a volume release, I would reccommend you buy it soon.
続きを読む
1人のお客様がこれが役に立ったと考えています
違反を報告
レビュー を日本語に翻訳する

Sam H
5つ星のうち4.0 Finally an affordable Madoka set!
2013年5月27日に英国でレビュー済み
Amazonで購入
Enough people have already mentioned why Madoka itself is brilliant so I will stick to reviewing this particular release.

The main reason I bought this particular set is because it is a great deal cheaper than all previous releases of this series since it only costs just under £30 whereas getting a hold of the Aniplex release would set you back well over £100 if you decided to import it.

This Blu-Ray set has all 12 episodes spread across three Blu-Ray discs which are in one standard box and stored in a rather nice glossy slipcase.
The visual quality is excellent on this set and there is a very noticeable difference in quality between the DVD and the Blu-Ray.

All in all this set is very reasonably priced(It really is)and despite a lack of special features I will give it a 4/5 simply for being a UK release of Madoka.