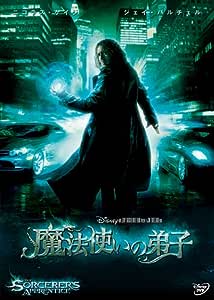 Freddie M
5つ星のうち5.0 Nick Cage great as the Sorcerer
2019年1月27日に英国でレビュー済み
Amazonで購入
This is surprisingly a really good film. I wasn't expecting much from a Disney production with a PG rating but this movie is entertaining for old and young alike. The film centres around Nick Cage who has to find a successor to Merlin in order to kill Morgana and save the world from the undead. Great special effects and the younger actors complement the established actors brilliantly without taking over and making it a "kids'" movie. Very well done, no idea why I hadn't watched it years ago!
続きを読む
2人のお客様がこれが役に立ったと考えています
役に立った
フィードバックを送信中...
フィードバックをお寄せいただきありがとうございます。
申し訳ありませんが、お客様の投票の記録に失敗しました。もう一度試してください。
違反を報告
レビュー を日本語に翻訳する

Benminx
5つ星のうち5.0 Hugely fun with a hint of the 80's magic of films like Gremlins
2011年3月2日に英国でレビュー済み
Amazonで購入
I was expecting very little from this, as a film inspired by the Disney 'Mickey with dancing mops' scene in Fantasia. However, somehow I feel they've worked the same magic they did with Pirates of the Caribbean - turning a very very basic idea with no mileage into a hugely fun and rich film. It starts with a real 80's throwback moment - a kid stumbles across his destiny in a creepy old magic shop and it ends up being one of the worst days of his life. Ten years later, he's a college student and a geeky physics prodigy, trying to win the heart of the girl he lost in high school. As Dave, I was initially thrown by the casting of Jay Baruchel. Having gotten used to Hollywood casting conventionally good looking heroes, he came as a surprise with his intense geekyness and awkward looks. However, it enables him to play a vulnerable, awkward, and slightly comedic character in a truly fantastic way, and throughout the film 'Dave' opens up more and more to us until he begins to become the hero everybody wants him to be. It enables him to be a genuine underdog, and you really find yourself cheering him along in that old 80's adventure-movie way. The rest of the cast are terrific as well. Nicholas Cage is very good but reserved, happily losing some of his 'wild-man' schtick to play a more serious but interesting character. Alfred Molina is very good and occasionally surprisingly menacing as the main bad guy, with Toby Kebbell as an amusing and vain sidekick. The magic effects are truly brilliant, with fizzing electrical bolts, utterly convincing fire, and a plethora of fantastic tricks. It all feels much more vital and alive and dangerous than it does in most of the other magic films like the Harry Potter movies. There are some fantastic and unexpected beasties, and a few nice twists and surprises, as well as a heroine/love interest who gets to show a bit of faith in the hero for once and actually play more of a part than just being the simpering 'girlfriend' role.
It's exciting, fast, intruiging, funny and breathtaking.
It's everything I didn't expect it to be.
It's definitely going in my collection.
And I'd highly recommend it as one of the most exciting and enjoyable family adventure films of the year.

Mark Norris
5つ星のうち5.0 Highly reccommended
2017年2月27日に英国でレビュー済み
Amazonで購入
I think it's one of Nicholas cages best films to the extent that I brought one for a gift for an additional person. I then found out that another friend is a Nicolas Cage fan and I purchased a copy for him as a gift. When you order any DVD/CD's whether new/used look at Music Magpie in the various price options, as they have excellent quality products at low prices.
続きを読む
1人のお客様がこれが役に立ったと考えています
役に立った
フィードバックを送信中...
フィードバックをお寄せいただきありがとうございます。
申し訳ありませんが、お客様の投票の記録に失敗しました。もう一度試してください。
違反を報告
レビュー を日本語に翻訳する

Domino
5つ星のうち5.0 Very enjoyable
2011年7月16日に英国でレビュー済み
Amazonで購入
The Sorcerer's Apprentice is a rare treat, a surprisingly good family film. The plot is excellent - fast-paced, dramatic and coherent, and the action sequences with the magic are extremely well put together. Some of the magic itself is extremely imaginative and well presented.
Nicholas Cage and Alfred Molina are in excellent form as warring sorcerers - both give the roles their all and both bring them beautifully to life. Molina in particular is a fantastically suave English villain, and his evil apprentice is great fun.
The film is just generally fairly creative and inventive (even if the physics is extremely dubious), and very enjoyable. Its clear that effort has been put into it, and although it is a somewhat typical coming-of-age story it manages to escape the usual pitfalls associated with script-writing for teenagers/ twenty year olds. The plot is not unduly weighed down by teen angst and our young cast is not rendered obnoxious through misguided attempts to render them too hip or cool. All in all this is an excellent film to watch, either with your children or when you fancy a moderately undemanding thrill ride.
続きを読む
2人のお客様がこれが役に立ったと考えています
役に立った
フィードバックを送信中...
フィードバックをお寄せいただきありがとうございます。
申し訳ありませんが、お客様の投票の記録に失敗しました。もう一度試してください。
違反を報告
レビュー を日本語に翻訳する

Mithril 13
5つ星のうち3.0 Not Too Magic
2011年11月4日に英国でレビュー済み
Amazonで購入
The trailers did it again for me (as well as Nicholas Cage being in the lead roll) but I was a bit dissappointed in this production. As always, Nicholas Cage was great although a little different from his usual rolls he pulled it off being Merlins ambassador charged in finding the next generation of Sourcerers. Jay Baruchel (who) was hopeless and unconvincing as the apprentice, though as a nerd, great. He just didn't cut it for me, however his girlfriend (Teresa Palmer) added the much needed glamour to the film while Alfred Molina as ever played the villan brilliantly although where did they find his sidekick? He just wasn't needed and was for me merely an annoying intrusion to the storyline whose scenes should have been filed on the cutting room floor. All in all a reasonable film to sit through baring the annoyances but not one I would rush to watch again.
続きを読む
役に立った
フィードバックを送信中...
フィードバックをお寄せいただきありがとうございます。
申し訳ありませんが、お客様の投票の記録に失敗しました。もう一度試してください。
違反を報告
レビュー を日本語に翻訳する
その他の国際レビューを読み込む

RICHARD HILL
5つ星のうち3.0 The Sorcerer's Apprentice - time to cast an eye on the city of New York.
2013年8月4日に英国でレビュー済み
Amazonで購入
Well I think that the 2010 Disney film of The Sorcerer's Apprentice is OK. Firstly I think that the American actor
Nicolas Cage did a good performance as the character of Balthazar Blake. Secondly I wasn't entirely sure that the actor
Jay Barchuel could perform the standards of practicing the elements of magic. It was OK for him to do on screen but
I didn't like it that much. However I think that the actor Alfred Molina did a fantastic performance as Maxim Horvath. It is because that I think that he has created a beautiful talent in other films such as the Prince of Persia: The Sands of Time and in Spider Man Two as Doc Ock. So those are just my overall opinions on this particular film. Thank you Amazon.co.uk. Three stars all round!
続きを読む
役に立った
フィードバックを送信中...
フィードバックをお寄せいただきありがとうございます。
申し訳ありませんが、お客様の投票の記録に失敗しました。もう一度試してください。
違反を報告
レビュー を日本語に翻訳する

Boss ehg man
5つ星のうち4.0 Great movie but i played it twice and it kept sticking
2020年4月12日に英国でレビュー済み
Amazonで購入
Absolutely love this movie, it has humour, magic and its a family film. Its unfortunate that it kept sticking the second time i played it- WOULD RECOMMEND BUYING IT ON PRIME OR DOWNLOAD !!!!
続きを読む
役に立った
フィードバックを送信中...
フィードバックをお寄せいただきありがとうございます。
申し訳ありませんが、お客様の投票の記録に失敗しました。もう一度試してください。
違反を報告
レビュー を日本語に翻訳する

Dante Cubit
5つ星のうち4.0 Science & Sorcery
2011年1月4日に英国でレビュー済み
Amazonで購入
The Sorecerer's Apprentice is an enjoyable romp. Nicholas Cage as per usual plays an engaging and likeable lead role as Balthazar Blake, a Sorceror who was once an apprentice to the legendary Merlin and has spent his years since guarding the world from the Morganians (followers of the wicked scorceress Morgana), imprisoning them in a magical Russian Doll-type device called 'The Grimhold'. Alfred Molina plays Maxim Horvath, Blake's nemesis of the movie and it's apparent from the start that he's enjoying playing a pantomime-style villain, camping it up and scowling to the max in every scene he's in.
The majority of the movie, however, focuses on Dave Stutler (Jake Cherry), whom first encounters Blake in an antique store at the age of 10. After witnessing the sorcerer in action, he unwittingly releases Horvath from his prison in the Grimhold. During the ensueing battle, both sorcerors are imprisoned in a chinese box with a 10-year lock. Dave, witnessing the battle, breaks a vase and wets his pants, which is witnessed by his classmates - cue troubled upbringing, with Dave being misunderstood by his peers and questioning what he saw. Fast forward 10 years, and Dave is still a little unhinged nerd, fascinated by science. The two wizards are released - and the battle ensues again...
The movie tries to blend both science and magic in a cohesive whole - which actually works well. The action and set-pieces are well constructed with some memorable special effects - personal favourite is the magic-fuelled car-chase chase through Manhattan's city streets.
Cherry is 'passable' as the geeky apprentice, and the story is about his coming-ove-age and his ascention to becoming Merlin's successor, however both Cage's and Molina's characters are so OTT (enjoyably so) that you can't help but get sucked into the rivalry throughout the film, and Stutler only really starts to become a stronger part of the story toward the last third of the movie. As mentioned previously, the effects are creative and believeable, and the film tries to balance science and magic in a fun and organic way that seems to work well. Recommendation? Far from cerebral, but still a decent Saturday night bowl O' popcorn movie!
続きを読む
1人のお客様がこれが役に立ったと考えています
役に立った
フィードバックを送信中...
フィードバックをお寄せいただきありがとうございます。
申し訳ありませんが、お客様の投票の記録に失敗しました。もう一度試してください。
違反を報告
レビュー を日本語に翻訳する

giandougl
5つ星のうち4.0 The Sorcerers Apprentice
2012年11月6日に英国でレビュー済み
Amazonで購入
Brilliant little film, and generally with any 7 year old boy/girl watching film, would not be problem.
No gore or swearing as you might expect from a typical Disney film.

Good plot, and the boys save the girls expected ending, after the vanquishing of the villains.
Running time about 105 minutes, with not too many dull moments during that time.

David Griffith
5つ星のうち4.0 Recommended with one reservation.
2015年4月19日に英国でレビュー済み
Amazonで購入
It's a lot of fun, makes me want to see the original film again. Knowing the original made this version even more enjoyable. Main drawback is the "apprentice" actor, not in the same class with the others. Which would be OK if there had been some character development as his powers developed, but it was a disappointment that he remained the nerd (very necessary to the story) that he was at the beginning. But I would recommend this version to anyone who likes this sort of fantasy movie.
続きを読む
役に立った
フィードバックを送信中...
フィードバックをお寄せいただきありがとうございます。
申し訳ありませんが、お客様の投票の記録に失敗しました。もう一度試してください。
違反を報告
レビュー を日本語に翻訳する

TonyD
5つ星のうち5.0 Magic !
2011年1月10日に英国でレビュー済み
Amazonで購入
Bought this on spec, and really enjoyed it.
Light-hearted fantasy family adventure, with elements of Harry Potter, National Treasure, Indiana Jones and Pirates of the Caribbean all in the mix, and pays a lovely homage to Disney's original too.
Alfred Molina steals every scene he is in, but the rest of the cast are well chosen too, Cage is 'just a little bit mad' and Jay Baruchel plays the unwitting hero just right.
So many loose ends, that it is inevitably set up for a sequel - hope they keep it as fresh and quirky as this !
続きを読む
役に立った
フィードバックを送信中...
フィードバックをお寄せいただきありがとうございます。
申し訳ありませんが、お客様の投票の記録に失敗しました。もう一度試してください。
違反を報告
レビュー を日本語に翻訳する

Amazon Customer
5つ星のうち5.0 The Sorcerer's Apprentice [DVD] [2010]
2014年4月23日に英国でレビュー済み
Amazonで購入
Nicolas Cage plays his somewhat usual role in this film but he does it very well. I like fantasy films but only when they are well made, which this is. It held my attention all the way through and was very entertaining. That is what I want out of a film and that is what I got. If you want something with deep meaningful content then look for another film. If you want a well made fantasy film that is good fun then you will enjoy this film.
続きを読む
役に立った
フィードバックを送信中...
フィードバックをお寄せいただきありがとうございます。
申し訳ありませんが、お客様の投票の記録に失敗しました。もう一度試してください。
違反を報告
レビュー を日本語に翻訳する