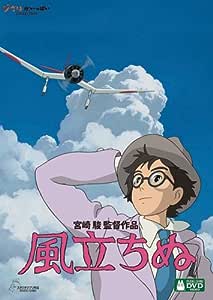 hillbank68
5つ星のうち5.0 A worthy last film from Miyazaki ; truly beautiful
2014年10月22日に英国でレビュー済み
Amazonで購入
This, it is said, is the last Miyazaki film. He has been such an exceptional, individual and magical film-maker that the great hope was that this film would not disappoint. It absolutely does not. It is the story of Jiro Horikoshi, designer of the Japanese Zero fighter, his early genius as a designer, his utter dedication to the work and his final success in building an outstanding and iconic plane. It is not, however, at all a film which glorifies war and the use to which the plane is put. Horikoshi is fascinated by design, flight, the wind, man's aspiration to be airborne, and the film taps into those in a lyrical, sometimes dream-like way (indeed, there are actual dream sequences). Structurally, it is somewhat episodic, but that does not matter ; there is always a feeling that this is about something 'bigger' and more fundamental than a literal story of the man's life and theplane itself. Parallel with Horikoshi's work is his relationship with Naoko, a girl he rescues from the Tokyo earthquake, and this is a sad story ultmately, providing a really moving but characteristically strange - and the better for it - ending. I can understand why some reviewers found this element in the film sentimental, but it worked for me. Visually, from its first moment to its last, the film is beautiful beyond words, and its beauty is underpinned by a very strong musical score. There is, in the end, no disappointment here, only the stamp of a unique master at work.
続きを読む
55人のお客様がこれが役に立ったと考えています
違反を報告
レビュー を日本語に翻訳する

Uncle Drewford
5つ星のうち5.0 What an Exit!
2014年11月7日に英国でレビュー済み
Amazonで購入
I LOVE this. true it doesn't have wolves and dragons or ghosts or phantoms or Cat Buses. What it does have though is the quintessential proof that Mayao can tell a story - and tell it beautifully. This is a fairly simple tale but it flows along at an even pace. I did ask myself "why do this as an animation rather than live action?" and the answer is obvious - Proves what a wonderful animator he is. The characters are utterly convincing. It is so seamlessly flawless that it is easy to forget just how difficult it is to make a 2D drawing come to life an be convincing. The pictures are sublime, a total treat for the eyes.

Do yourself a favour and buy this, just to give yourself a total escape for a few hours.

Goodbye, we will miss you

Neale O
5つ星のうち5.0 unconventional and compelling - ‘The Wind Rises’ (on a StudioCanal DVD)
2020年5月7日に英国でレビュー済み
Amazonで購入
This happens to be my personal favourite of all the Studio Ghibli animated films - a fanciful, fictionalised biopic of the man who designed the Zero fighter plane in the years leading up to World War Two.
It seems an unlikely subject for mainstream animation, but this 2013 film (directed by Hayao Miyazaki) is really impressively staged, and a fascinating slice of aviation history. It has a running time of about two hours too.

I had initially seen ‘The Wind Rises’ in Japanese, with subtitles, on Film Four - so I was pleased to see that this DVD has both the original language version and a good English dubbed option. Other extras include some storyboard sequences and trailers.
続きを読む
違反を報告
レビュー を日本語に翻訳する

Peter L Drake
5つ星のうち5.0 An extraordinary film
2015年6月22日に英国でレビュー済み
Amazonで購入
I would never have believed that a cartoon film could be so beautiful and so affecting. It's an astonishing achievement. Nor would I have believed that the life story of a guy who designed a fighter aircraft could be so moving. The quality of drawing and animation is superb and the story itself is told with great lyricism and depth.
Really it has very little to do with the Zero fighter, it's essentially about the wonder of flight and the inherent beauty of clever engineering. The chief character, Jiro, is a strange child who grows into an equally strange but gifted aeronautical engineer, pursuing his dream through turbulent and terrible times in Japan. We also follow his lifetime romance which begins with a chance encounter very early in his career and seems doomed from the start, but the outcome is strangely uplifting. Brilliant film, essential viewing for anyone with a heart.
続きを読む
3人のお客様がこれが役に立ったと考えています
違反を報告
レビュー を日本語に翻訳する

M. M. Johnson
5つ星のうち5.0 A Feast For The Eyes
2018年2月9日に英国でレビュー済み
Amazonで購入
This is a delight. Worth watching for the artwork and quality of the animation alone. Also a very interesting story, not only of Jiro the aircraft designer, but also for the beautiful depiction of historical events and details. I enjoyed it most in Japanese with English subtitles as the sound of the English language version jarred with the Japanese visuals. Also I am hard of hearing so I am used to relying on subtitles.
続きを読む
1人のお客様がこれが役に立ったと考えています
違反を報告
レビュー を日本語に翻訳する
すべてのレビューを参照します
同様の商品をご覧になりませんか？ こちらのリンクで参照ください。dvd 邦画
トップへ戻る
Amazonについて
Amazonでビジネス
Amazonでのお支払い
ヘルプ＆ガイド
日本語ショッピングのための言語を選択します。 日本ショッピングのための国/地域を選択します。
© 1996-2020, Amazon.com, Inc. or its affiliates