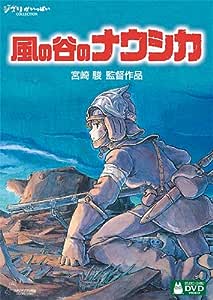 C. J.
5つ星のうち3.0 Solid 3 stars
2020年4月9日に英国でレビュー済み
Amazonで購入
I liked this, but it’s not a favourite of mine. Maybe I’m getting too picky because of the good quality Ghibli films I’ve been binge watching. I’m not saying this is bad, it’s just my own personal tastes. Couple of quick positives I liked was Nausicaa and her passion towards wildlife and how quick she was to help every time, also her relationship with Asbel wasn’t pushed, because it’s an older film I was expecting love to be more a part of it, however they didn’t have many scenes together so it was quite nice the viewer could see them how they wanted, as a couple or friends.
続きを読む
役に立った
フィードバックを送信中...
フィードバックをお寄せいただきありがとうございます。
申し訳ありませんが、お客様の投票の記録に失敗しました。もう一度試してください。
違反を報告
レビュー を日本語に翻訳する

Stella Starnes
5つ星のうち5.0 a beautifully animated epic
2010年6月25日に英国でレビュー済み
Amazonで購入
"Nausicaa Of The Valley Of The Wind" is a breathtaking feature film, and the one that helped launch Studio Ghibli. I love it ever so much since it touches on some brilliant themes, such as living in the knowledge that humans have great power over nature, but also that nature itself can be a character and is able to cling onto survival. The main character, Nausicaa, the Princess of the Valley of the Wind, is very easy to connect with, since she hopes for a brighter future, looks for the solutions to the terrible pollution her fellow humans have made and has her weaknesses as we all do, for instance when she takes several lives in order to avenge a personal tragedy. Her little foxsquirrel companion, Teito, is so cute when he calms down under her influence after he is revealed to her by Lord Yupa, who she saved from a guardian of a toxic jungle that arose out of all the pollution that mankind has created. What's good about this film is how men and women are not set apart from each other, and that a woman can easily be a ruler as well as any man, which makes Nausicaa's character especially influential and accepted by her people. The same applies to Kushana, Commander of the Tolmekian Army, although she is more of a military minded, demanding personality which makes it difficult for the people of the Valley to accept that she too is a Princess. Nausicaa's ability to communicate with the herd of Ohmu, the creatures that guard the jungle, is rather strange, yet deeply moving, and how they return affection is simply beautiful, as I think people often forget that animals are able to give back some of the love that we give to them. As weird as some of the insects are, it is an amazing sight when they come onto the screen in the hundreds and thousands, and it seems very likely that our world will be inhabited by more animals than people in the unforeseeable future. The Tolmekians, who are greedy and intent on expanding their kingdom, and the Pejites who are equally nasty are both at it hammer and tongs between each other, and are particularly good at wanting to be enemies, whilst the people of the Valley want only to lead peaceful lives, and are guided by Nausicaa, the admirable and true ruler, who really wants to help the two armies to accept each other's beliefs and differences, and to become friends. I love the scenes at the end of the movie as they show how everyone is able to survive by respecting nature and spending as much time as possible just by living. Although there is some violence, it's not all blood and gore which makes it a breeze when compared to other films that are constantly ruled by such things. It's a wonderfully moving and thematic masterpiece, it makes me think about how we look on our world and that humans can be gentle towards wildlife, and are able to amend what wrongs they have done to it in the past.
続きを読む
5人のお客様がこれが役に立ったと考えています
役に立った
フィードバックを送信中...
フィードバックをお寄せいただきありがとうございます。
申し訳ありませんが、お客様の投票の記録に失敗しました。もう一度試してください。
違反を報告
レビュー を日本語に翻訳する

@Dangle9000
5つ星のうち4.0 "A toxic jungle now spreads, threatening the survival of the last of the human race."
2008年9月25日に英国でレビュー済み
Amazonで購入
This anime classic explores the familiar ecological theme often found in such Ghibli works as Princess Mononoke.

This an engaging film which might not appeal to younger audiences due to the complex story, and the giant scary insects (which again are reminiscent of the giant forest spirits in Princess Mononoke).

In a world of warring civilisations clinging on to the few natural resources available due to the years of constant pollution, a plan to resurrect an ancient force and change the world results in a battle to protect the future of the planet. This is a pretty involved story and isn't one to be casually watched whilst doing the housework or checking your e-mails. The main characters are strong and as with most of Miyazaki's work there is not a distinct side of good or evil, everyone simply has their own agenda which they believe to be the right one. Even the giant insects which have devastated villages are eventually shown as being not-quite-so ruthless, and victimised themselves.

The ending seemed a bit predictable, but your fondness for the heroine Nausicaa ensures that it's the ending you want for.

In a nutshell: If you're a Ghibli fan then this is probably already in your DVD collection. This early Ghibli work shows how environmentalism struck a chord with writer/director Miyazaki from the very beginning, and went on to inspire other works often considered to be masterpieces. It could be argued that this film would benefit from being edited down slightly, but I like the long editing - it emphasises the epic-ness of the adventure and doesn't trivialise the core story of a young princess who empathises with everyone and everything around her.
続きを読む
1人のお客様がこれが役に立ったと考えています
役に立った
フィードバックを送信中...
フィードバックをお寄せいただきありがとうございます。
申し訳ありませんが、お客様の投票の記録に失敗しました。もう一度試してください。
違反を報告
レビュー を日本語に翻訳する

Atro Merrek
5つ星のうち5.0 A great movie
2013年4月7日に英国でレビュー済み
Amazonで購入
This movie gave birth to Studio Ghibli, provided inspiration for many people including the creator of Final Fantasy, and is one of the best movies I have ever seen. I have already watched it twice, and both times I was reduced to tears by the power of While the original Japanese is very good, the dub is well worth experiencing. A fine star-studded class manage to pull off a script that is moving and powerful, and they don't sound over-dramatized or empty. Joe Hisaishi's soundtrack is also stellar, moving from sweeping orchestral arrangements to eighties electronic techniques to minimalist beats and sounds that prove to be all the soundtrack needed in some moments. From its simple opening through its heart-thumping middle down to the semi-mystical, sob-inducing ending, this is a movie everyone should see.
続きを読む
1人のお客様がこれが役に立ったと考えています
役に立った
フィードバックを送信中...
フィードバックをお寄せいただきありがとうございます。
申し訳ありませんが、お客様の投票の記録に失敗しました。もう一度試してください。
違反を報告
レビュー を日本語に翻訳する

Babs
5つ星のうち5.0 Very happy
2018年12月12日に英国でレビュー済み
Amazonで購入
Nausicaa is one of my all time favourite Studio Ghibli films, it is one I will happily buy again and again when some reason my old copy just would play anymore. It is gripping from beginning to end and you really feel for her. It is an awesome classic and one I will always watch.
続きを読む
役に立った
フィードバックを送信中...
フィードバックをお寄せいただきありがとうございます。
申し訳ありませんが、お客様の投票の記録に失敗しました。もう一度試してください。
違反を報告
レビュー を日本語に翻訳する
その他の国際レビューを読み込む

Kieran
5つ星のうち5.0 In my top 3
2017年2月5日に英国でレビュー済み
Amazonで購入
This is honestly up there with my top 5 Studio Ghibli movies, the story, the characters, the settings, the designs, the meanings, everything about it, absolutely gorgeous, for what is technically their first movie, they did amazing! I would definitely recommend it to everyone!
続きを読む
2人のお客様がこれが役に立ったと考えています
役に立った
フィードバックを送信中...
フィードバックをお寄せいただきありがとうございます。
申し訳ありませんが、お客様の投票の記録に失敗しました。もう一度試してください。
違反を報告
レビュー を日本語に翻訳する

Anon
5つ星のうち5.0 Good movie, suitable for all.
2012年1月8日に英国でレビュー済み
Amazonで購入
This movie was made in 1984 but is still enjoyable. The animation is a little dated but it is still good. There is a good original storyline which is watchable for kids, teenages and adults...... (Well some adults). If my kids were still little I would much prefer to sit and watch this with them rather than some of the more popular Disney movies. It is not as good as Spirited away or some of the other more popular anime movies but, as long as you don't pay too much, then I think it is a good buy. Steven Spielberg should make a 3D remake of this movie, now that would be a good movie.
続きを読む
役に立った
フィードバックを送信中...
フィードバックをお寄せいただきありがとうございます。
申し訳ありませんが、お客様の投票の記録に失敗しました。もう一度試してください。
違反を報告
レビュー を日本語に翻訳する

Amazon Customer
5つ星のうち5.0 Fantastic
2006年8月29日に英国でレビュー済み
Amazonで購入
When I first saw this film it was called Valley of the Winds. I looked for this film on and off since first seeing it in the 1980's. Then amazon suggested a film to buy. I looked the desciption and disovered it was the same film, with a different title. This is a wonderful imaginative film and seeing it again after all these years is great. I have shown it to my children and they all love it. The story line for a lot of Studio Gibli films are far superior to anything else you will see.
続きを読む
10人のお客様がこれが役に立ったと考えています
役に立った
フィードバックを送信中...
フィードバックをお寄せいただきありがとうございます。
申し訳ありませんが、お客様の投票の記録に失敗しました。もう一度試してください。
違反を報告
レビュー を日本語に翻訳する

Emi
5つ星のうち5.0 Miyazaki's Origin - his First Original and Greatest Film
2009年12月26日に英国でレビュー済み
Amazonで購入
For foreigners, this title came later than Princess Monomoke and Spirited Away. But for Japanese, this one was the Miyazaki's first original feature film, which was released in 1984 and I saw it then. Many in my generation in Japan still believe this is his greatest film.

After 25 years later, this movie still gives me the same strong inspiration: all of his consistent messages are here already. Nausicca embodies the greatest of human being: love and care for every creature without any preconception or discrimination; pure mind to see what is the most important things which make all of us to co-exist in the world; and courage to act on her belief. I always think of her when I hear all the difficulties which we are facing now for climate change and sustainability.

Mitazaki directed various TV cartoon series in Japan during the 1970s and I grew up with them (how lucky!). Of course, I did not care who was making these great anime shows. Many were broadcasted in other countries, so you may know them. I just enjoyed their beautiful stories, drawings and music. His first feature film, The Castle of Cagliostro, was released in 1979 in Japan (a very fun movie, although the story was not his original, I do strongly recommend this one too. This was the film version of a very popular TV anime series in Japan, Lupin the Third).

I do not go into the content of this film because other people already explained beautifully, but I really recommend Nausicca to everyone as the origin of Miyazaki films.

This film was also the first collaboration between Miyazaki and Joe Hisaishi (his music composer and director). Joe was very little known in Japan before this movie, but this film's immense success made him one of the most successful composers in Japan too! Please enjoy his music as well.
続きを読む
5人のお客様がこれが役に立ったと考えています
役に立った
フィードバックを送信中...
フィードバックをお寄せいただきありがとうございます。
申し訳ありませんが、お客様の投票の記録に失敗しました。もう一度試してください。
違反を報告
レビュー を日本語に翻訳する

S. A. H.
5つ星のうち4.0 Japanese culture.
2016年4月14日に英国でレビュー済み
Amazonで購入
This was bought by me as a present for a grandson who enjoyed this when he saw it originally. I've not seen it so can't comment, but I do admire Japanese art (especially antique painting/china) - possibily I will see it some time.
続きを読む
役に立った
フィードバックを送信中...
フィードバックをお寄せいただきありがとうございます。
申し訳ありませんが、お客様の投票の記録に失敗しました。もう一度試してください。
違反を報告
レビュー を日本語に翻訳する