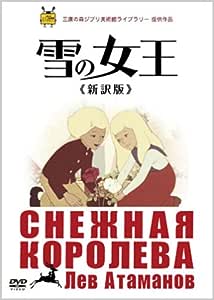 Lori Fernandez
5つ星のうち4.0 Classic
2014年1月6日にカナダでレビュー済み
Amazonで購入
This is an interesting piece of history from the original Hans Christian Anderson tale.
The art work from the time is amazing. Simple but outstanding.
The story is an example of old time values and can be interesting to children and families.
Interesting to see many of our standards come from this tale.
Older people may like the prelude by Art Linkletter.
続きを読む
1人のお客様がこれが役に立ったと考えています
役に立った
フィードバックを送信中...
フィードバックをお寄せいただきありがとうございます。
申し訳ありませんが、お客様の投票の記録に失敗しました。もう一度試してください。
違反を報告
レビュー を日本語に翻訳する

Dax
5つ星のうち3.0 Preferred a different English VoiceOver
2013年10月31日にカナダでレビュー済み
Amazonで購入
I watched this movie all the time when I was younger, but the version I remember had a different English voice over and translation which I thought was better. I had hoped the version I remembered as a child was the one I purchased, but for $5 it's no loss. Still an interesting story and animation I hope my own children will enjoy as a winter classic.
続きを読む
役に立った
フィードバックを送信中...
フィードバックをお寄せいただきありがとうございます。
申し訳ありませんが、お客様の投票の記録に失敗しました。もう一度試してください。
違反を報告
レビュー を日本語に翻訳する

FredTownWard
5つ星のうち5.0 This Is the Version You Are Looking For, (But I've Good News and Bad News About It)
2013年1月28日にアメリカ合衆国でレビュー済み
Amazonで購入
Assuming you are looking for the Russian animated (1957), dubbed into English version featuring the voices of Sandra Dee and Tommy Kirk, preceded by a live action introduction featuring Art Linkletter, the one that used to play so often on TV in pre-VCR days, that is. This version still sends shivers down my spine with its incredibly moving depiction of heroine Gerda's unstoppable quest to free her playmate Kay from the Snow Queen's clutches, a dedication that inspires almost everyone (and everything) she meets into similar efforts to help her. If you ever saw it, you know this; if you never saw it, you owe yourself (and your children) a viewing.

(Amazon has unfortunately grouped together the reviews of several different versions of The Snow Queen so before purchasing make sure to follow the links provided in this review in order to get the version you actually want.)

The bad news is that the print is in pretty sad shape: scratched, spliced, and so dark that the nighttime scenes are all but invisible. The soundtrack also has a lot of glitches, but wait, there's more.

The good news is that the film was recently restored, and this Films by Jove (2006) version is available here: The Snow Queen - Golden Antelope - Bench - Cyclist - Fence along with four other animated films also directed by Lev Atamanov with the original Russian soundtracks and English subtitles. Although the restoration isn't as perfect as you might have expected these days, the biggest improvement is that the nighttime scenes are quite clearly visible in their entirety.

The bad news is that the English dubbed soundtrack was NOT made available, not even as an option! IMHO this was an inexcusable lapse, particularly given the concerns of those involved over income being lost to public domain editions like the one I'm recommending instead. Well, if they'd had the sense to include the English dubbed soundtrack (preferably restored), along with the Art Linkletter intro, the montage accompanying Sandra Dee's song "Do It While You're Young", and the English Opening and Closing Credits with the title song (all preferably restored) as options, who would buy a PD version ever again? Now, anyone looking for the version they remember has no choice but to do so!

Discotek Media was faced with a similar problem when they reissued a trio of Japanese animated classics that also used to play regularly on TV in Fred Ladd English dubbed versions: Horus, Prince of The Sun (Little Norse Prince),The Wonderful World of Puss 'N Boots, and Animal Treasure Island. Besides offering the original Japanese soundtracks with subtitles, they also give you the option of watching the pristine restored film prints with restored versions of the old English dubbed soundtracks. Only a fool would buy a public domain or pirated version of these films now!

Note: If, like me, you were a little surprised when you first learned that this film was Russian not Japanese animation, it turns out there just might be a reason. It seems that a young Japanese animator who was discouraged and ready to quit and do something else went to see this film in a theater and came out truly re-inspired. The name of this young man whose future animation work was almost lost forever?

That's why his Studio Ghibli has released a DVD of the restored version with Japanese subtitles here: The Snow Queen.

Note: The 2-disc version of Fairytale Adventures from TGG Direct, the one that says "9 Hours of Animated Films" on the cover, turns out to contain a different print of this film on its second disc, without the Linkletter intro, without the annoying audio and video glitch at the beginning, but also without the entire sequence with the robbers! Not recommended.
続きを読む
57人のお客様がこれが役に立ったと考えています
役に立った
フィードバックを送信中...
フィードバックをお寄せいただきありがとうございます。
申し訳ありませんが、お客様の投票の記録に失敗しました。もう一度試してください。
違反を報告
レビュー を日本語に翻訳する

Kcorn
5つ星のうち5.0 I still have my beloved record album of this movie and both film and recording hold up after all these years
2008年5月9日にアメリカ合衆国でレビュー済み
Amazonで購入
I recall being a child and listening to the record version, based on the movie. Actually, the record may have been the original movie, full length, put on a record. If it was edited and shortened, they certainly left in the best parts.

IMPORTANT INFO FOR POTENTIAL BUYERS: Several versions of this exist on VHS and/or DVD. The one you want is the one with Sandra Dee, Tommy Kirk and (as much as you may hate this part) the voice of Art Linkletter just before the movie starts. Why? Because that is the definitive version, the one you may recall from childhood if you are a Baby Boomer and the one that endures the test of time.

Not a typical Disney type of film, the movie and soundtrack contains all the basic plot outlines of The Snow Queen (two young children, a boy and girl fall in love until the evil Snow Queen hardens the heart of one) but it isn't overly prettified for children. I was absolutely entranced by both the film and music as a child and the clearly Russian flavor of the music, very romantic. Some of the animals have European accents. Patty McCormack (yes, the same child star who appeared in The Bad Seed) does a tour de force performance as Angel, the child torn between evil and good. Sandra Dee makes a fine Gerta.

When she sings the very lovely "Do What Your Heart is Feeling" I am still swept with nostalgia. It is a bittersweet song with lyrics that go, "Do what your heart is feeling...what is the point concealing...but do it while you're young...go after the one you love, he needs you..but do it, don't wait". Seeing these lyrics, stripped of musical background and put on the page, I realize how impossible it is to describe the plaintive quality of Sandra Dee's voice as she sings these words, the yearning and pain. I can only urge you to see the movie and catch the performances of her, Tommy Kirk, Patty McCormack and many others. The Snow Queen comes across as formidable as well, truly cold and heartless, never yielding. This isn't for very young children (or use your judgment about that).

This is a classic film but I am admittedly biased. I see it through waves of nostalgia and memories of kiddie matinees at the movie theatre, feet stuck to the floor (usually due to some candy tossed around by various children), entranced by the story of The Snow Queen.
続きを読む
53人のお客様がこれが役に立ったと考えています
役に立った
フィードバックを送信中...
フィードバックをお寄せいただきありがとうございます。
申し訳ありませんが、お客様の投票の記録に失敗しました。もう一度試してください。
違反を報告
レビュー を日本語に翻訳する

Robert V. L. Johnstone
5つ星のうち3.0 Great family movie; poor reproduction
2006年11月4日にアメリカ合衆国でレビュー済み
Amazonで購入
This movie is a treasured memory from my childhood; along with The Grinch and It's a Wonderful Life, The Snow Queen was a Christmas TV staple until it just vanished. Finding it 30 years later was tough, but worth it. This Russian film is wonderful family viewing (although the sappy Art Linkletter intro is skippable), and you almost have to forgive the extremely poor quality of the print (which includes obivous missing chunks) and awful sound. Still, the story of the indomitable Gerda searching for her kidnapped brother rings as true as ever, and is also a welcome "girl empowerment" tale. Of course, it's harder to square the fact that the evil character is yet another dangerously cold woman ala almost every Disney baddie, but at least this one is drawn more along the lines of C.S. Lewis' queen. If you're willing to overlook the technical difficulties with this DVD, you'll find a wonderful story that has not faded with time.
続きを読む
5人のお客様がこれが役に立ったと考えています
役に立った
フィードバックを送信中...
フィードバックをお寄せいただきありがとうございます。
申し訳ありませんが、お客様の投票の記録に失敗しました。もう一度試してください。
違反を報告
レビュー を日本語に翻訳する

JACKIE
5つ星のうち4.0 DO YOU HAVE A SNOW QUEEN IN YOUR LIFE??
2008年11月23日にアメリカ合衆国でレビュー済み
Amazonで購入
My daughter got involved in a very controlling relationship. It seemed to change the core of who she was. I tried to explain the story of the Snow Queen. I remembered this movie about the ice splinter getting in the little boys eye, it froze his heart and he was under the spell of the Snow Queen. He became a different kind of person and forgot all about those who truly loved him. But it was that same love that didn't give up on him that eventually melted that ice splinter and he was back to his old self. I purchased the movie that I must have seen over 40 years ago.
I like to think, though quite simply done and a bit antiquated, that she got the point somehow. All I know is the Snow Queen is gone and the splinter melted.

TundraBee
5つ星のうち5.0 Flawed - but still a "Must Have" for the Christmas Collection
2005年12月15日にアメリカ合衆国でレビュー済み
Amazonで購入
This reviewer's criteria for awarding 5 stars is "BUY THIS NOW! If you might loan it to a friend, (who may 'forget' to return it,) buy several now!" And not the hokey introduction by Art Linkletter and kids (Look! There's Toby Tyler!) nor the even hokier introduction and narration by "Old Dreamey" a/k/a "the Prince of Dreams" and his magic "slumberella" such that, a la Pam Ewing, the story is presented as a dream Hans Christian Anderson had, the sometimes poor condition of the visual and audio on this re-found 60's jewel, nor the absence of bonus features can dissuade this reviewer from giving this DVD 5 shining stars. The animation draws one in and the voicing by another Disney original staple - Tommy Kirk; and Sandra Dee, and June Foray (voice of Chatty Cathy when we pulled the ring string, and Rocky the Flying Squirrel) remain as captivating and magical as I remember. This, "It's a Wonderful Life," and "Mr. Magoo's Christmas Carol" are essential ingredients to my Christmastime viewing.
Parents beware - this version of "the Snow Queen" may not be suitable for very young viewers - those afraid of the Wicked Witch of Western Oz and her flying monkeys may be equally fearful of the evil Snow Queen dispatching her fiendish snowflakes. /TundraVision, Amazon Reviewer
続きを読む
13人のお客様がこれが役に立ったと考えています
役に立った
フィードバックを送信中...
フィードバックをお寄せいただきありがとうございます。
申し訳ありませんが、お客様の投票の記録に失敗しました。もう一度試してください。
違反を報告
レビュー を日本語に翻訳する