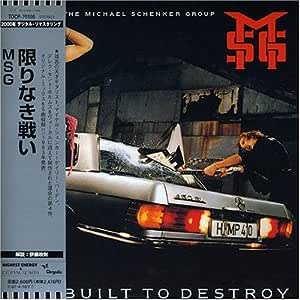 Robert Knowles
5つ星のうち5.0 Not Quite Assault Attack, but Still Five Stars
2007年8月17日に英国でレビュー済み
Amazonで購入
I do not agree with the other reviewer of this album. Built to Destroy is very strong in terms of Schenker's playing, Barden's vocals, the songs themselves, and the performance of the band generally. There is not a single dud track on the album. This is excellent pop-metal.

It is true that I have said it is weaker than Assault Attack elsewhere - but what isn't? Built to Destroy is still a strong album - though where I do agree with the other reviewer is in relation to the live album, Rock Will Never Die. Better to get the slightly earlier(?) BBC Radio One Live MSG (Reading Festival) or One Night at Budokan - unless you're a collector of course!

Built to Destroy opens with a corker - Rock My Nights Away, which has superb guitar soloing. Next, is I'm Gonna Make You Mine, which is a very catchy sing-a-long. Next is the entirely respectable Dogs of War - excellent riffs - no duds so far. Systems Failing is yet another great sing-a-long. This album is more catchy than Assault Attack. Captain Nemo is a superb and well-known Schenker instrumental. Still Love that Little Devil is yet another great catchy number, as is Red Sky. The songs on this album are very strong, as are Barden's vocals. Time Waits for No-one is very boppy. This is almost a party album - very uplifting. Walk the Stage (Rock will Never Die) is more of a ballad, and yet is still strong melodically, and has an excellent guitar solo. Definitely get this album - it is less harsh on the ear than Assault Attack. Recently at a party, it was great having Built to Destroy on in the background. That was when I first realised that it did actually work well as an album - against what some critics think!
続きを読む
7人のお客様がこれが役に立ったと考えています
違反を報告
レビュー を日本語に翻訳する

Mr Blackwell
5つ星のうち4.0 Time to reappraise?
2011年8月9日に英国でレビュー済み
Amazonで購入
Another Schenker disc which was roundly criticised when released back in '84,I always felt it was a decent effort,this remastered edition only confirms that belief.

The remix USA version,re sequenced the tracks,most were slightly longer,the sound quality,to these ears,slightly better,where it also won was the introduction of Derek St Holmes vocal on 'Still Love That Little Devil' and the guitar intro to 'Rock My Nights Away',small changes i know but it swung the USA remix ahead ,in my humble opinion,the remastered edition allows you to compare both versions,i still prefer the USA version.

The Hatchling
5つ星のうち5.0 Underrated Gem where Schenker shines
2017年5月24日に英国でレビュー済み
Amazonで購入
Love this album, the original version is far superior to the soft US remixes. Some great lead breaks as always, Barden's voice had gone at this juncture but the songs are still strong. The US version would have been interesting if Derek St Holmes had sung lead vocals on all the tracks, may have achieved the desired radio airplay.
続きを読む
1人のお客様がこれが役に立ったと考えています
違反を報告
レビュー を日本語に翻訳する

SkyChurch
5つ星のうち3.0 80's Glam Rock
2017年9月15日にカナダでレビュー済み
Amazonで購入
This cd comes with 2 mixes (18 tracks). The UK version, and a USA mix. After listening to the UK mix - I wanted to discard the cd. Just sounded like 80's pop rock - with a female keyboard player leading the band. But the initial reviews of this release, may have induced a 2nd US mix - which saves this recording - as MS guitar parts are raised - to the front of the mix. Still, not one of his better Rock records.
続きを読む
1人のお客様がこれが役に立ったと考えています
違反を報告
レビュー を日本語に翻訳する
すべてのレビューを参照します
Amazonプライム会員ならお急ぎ便、日時指定便が使い放題
さらに、映画もTV番組も見放題。200万曲が聴き放題 。クラウドに好きなだけ写真も保存可能。
> プライムを無料で試す