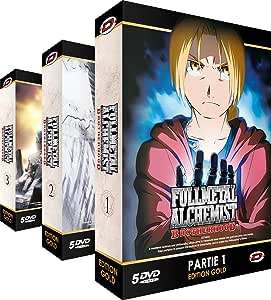 Billy Bass
5つ星のうち5.0 Just Amazing
2017年6月17日に英国でレビュー済み
Amazonで購入
I had actually brought this boxset by mistake, I was looking for Full Metal Panic and just typed "Full Metal" in the search and clearly wasn't paying attention at the time, and only notice when I received it. Boy was I happy that I did. I think this is the BEST anime I have watched in a long time (if not forever)
The storyline is very good and has many twists and turns, not the (often) usual ideas. You get the whole range of emotions and possibly the biggest compliment I could give it was I was always looking forward to seeing the next episode.
続きを読む
25人のお客様がこれが役に立ったと考えています
違反を報告
レビュー を日本語に翻訳する

Jaz Aitchison
5つ星のうち5.0 10/10, Will Watch It Again
2018年1月3日に英国でレビュー済み
Amazonで購入
If you've yet to experience the wonder that is Fullmetal Alchemist: Brotherhood, then I suggest you do so immediately. I really wanted to hate this series, as all I've ever heard is people going on about who good it is. However, it turns out that all of it's praise is well-deserved. It has everything you could ever want; likeable protagonist, a compelling story line, a colourful cast of villains, fantastic voice acting, detailed character arcs for the majority of the characters... What I'm trying to say is, this series is really good. Really, really good! It's also 64 episodes long, so it's good value for money if you think about it that way. If you find the number of episodes daunting, then let me promise you this; after the first ten episodes or so, you'll be so hooked that you'll be wishing there was more!
続きを読む
7人のお客様がこれが役に立ったと考えています
違反を報告
レビュー を日本語に翻訳する

MyKeyReviews
5つ星のうち5.0 Fullmetal Alchemist Brotherhood
2019年9月1日に英国でレビュー済み
Amazonで購入
Full Metal Alchemist is one of my favourite animes, but do not confuse the first version adaption of the series to Brotherhood; the first adaption was very enjoyable but it swayed off-track from the Manga and unfortunately didn't end that great, whereas Brotherhood follows the Manga more closely and a delivers top tier storyline throughout.

All I can say is if you haven't watched it, do, you won't regret it.
続きを読む
4人のお客様がこれが役に立ったと考えています
違反を報告
レビュー を日本語に翻訳する

Oscar Francis
5つ星のうち5.0 A masterpiece
2020年4月17日に英国でレビュー済み
Amazonで購入
Whether or not you like or dislike anime, whether you a a hardcore weeb or total newbie to anime, you will enjoy this show. It's isn't prolonged with filler, and each episode is important in telling the super strong narrative, as the story gets more and more interesting, with twists and turns and revelations that make you want to keep going. The characters are greatly designed, the animation is absolutely fantastic, by studio bones. The music is epic and orchestrated well.

But what makes this so amazing is the story, the world building, and how everything falls into place for the most epic final season.

Xbox Kiki
5つ星のうち5.0 A journey I didn't want to end!
2014年2月17日に英国でレビュー済み
Amazonで購入
Ahhh....Fullmetal Alchemist. I'm actually quite a new fan of this series. I knew that the show exited when I was about 12, but I never found it that appealing which was one of my biggest mistakes, because this anime is too freaking good to be missed out on! I watched it after wathing the first opening that I really liked and thought I would give it a shot. Anyway on to the actual review.(I actually just finished watching the whole anime for the first time 30 min ago)

The story is about two brothers named Edward and Alphonse Elric who lost their mother. They want to revive her to see her smile once again and in order to do so they use the art of alchemy. However it didn't succed, because of alchemy's first law of equvilant exchange and therefore Alphonse loses his whole body and Edward loses his right arm and left leg. They then take on a long journey to find the Philosopher's Stone to get their original bodies back. I don't want to explain anything else, because that would be spoiling the suprises, but I can say without a doubt that the story is really brilliant and amazing. The characters are all really really well thought out and I was kind of suprised that I loved the whole cast(which doens't happen often).

The animation quallity is really good. Studio BONES is my fav anime studio and they always make nice clean animations. The character design made by Hiromu Arakawa are really good and it's awesome that none of the characters look the same, but probs to the studio that they've taken Arakawa's design and made them come beautifully to life. The soundtrack is one of my favs and fits the show perfectly.

The voice casters...What can I say? The Japanese cast have done their job amazingly well. All the voices fits the characters and give it their all to really be the characters they are when their acting their roles. Romi Park is really good at voicing Edward and she is one of my fav voice acters in anime, but in truth everyone does the job splendedly. I havn't heard a lot of the dub, beacause when I heard it was Romi Park who was Ed I just needed to watch the anime in Japanese. But the bits I've tried in English dub sounded really good so when I get around to watch the anime again I will try to watch it in English dub.

All in all go buy this anime. It's a fun journey that's filled with homour, drama and action - I mean what more could you want? It has a brilliant way of making you feel sad, happy, angry and everything in between and you really want the brothers to succed in their quest.Even if you aren't an anime fan(I'm not that into anime but have watched a handful differen shows) you owe it to yourself to watch this. It actually made me cry on different part of the show which is really something, because I almost never cry(except the ending of Mouilin Rouge always makes me cry). I'm happy yet sad at the same time that I've finished watching the whole show a bit the same feeling the song Let it Out(second ending theme of FMAB)It was amazing and is my fav anime of all time. Btw I find that a lot of show in generel are ruined by the way the shows end(Buffy the Vampire Slayer I'm looking at you), but this ending isn't a let down at all I can tell you!

If I would recomend anything else a bit like this it would be Avatar The Last Airbender (if you count it as anime), but I feel that it's one of those shows I wouldn't want to end any other way that they actually did. Shows with endings that didn't ruin the rest of the show.