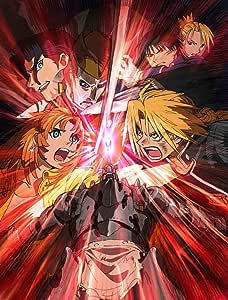 Teague Prower
5つ星のうち5.0 Great Animé Movie.
2012年5月27日に英国でレビュー済み
Amazonで購入
what can i say? this movie is awesome.

i remember hearing bad things about it, but i watched it anyway.

i got this the day it came out in the us (roughly 5 months before it's expected uk release).

this is what i think of this movie:

Story: 8/10 - a really great story set in a new country taking place somewhere between episode 20-21 in brotherhood.
Art Style: 10/10 - it's not the typical art style, yet it looks new and fresh.
Animation: 10/10 - the animation is just brilliant.
Characters: 8/10 - not perfect. but i found most characters to be likeable in their own way.
plot twists: 6/10 - not gonna lie, the plot twist is predictable as hell. not gonna tell you what it is though. you'll have to watch the movie.

Overall: 8.5/10 - easily worth importing from the us. looks amazing on blu-ray.

WARNING: THIS IS REGION A ONLY. MAKE SURE YOU HAVE A BLU-RAY PLAYER THAT CAN PLAY AMERICA-ONLY BLU-RAYS!

Barbot
5つ星のうち3.0 Reviewing FMA brotherhood movie
2012年7月27日にカナダでレビュー済み
Amazonで購入
This movie is ok. It is a film on his own meaning it dosent follow any specific time from the orginal series. It is like watching a sub story from the serie. So it good but the graphic and action is less detailed then the main series.
続きを読む
役に立った
フィードバックを送信中...
フィードバックをお寄せいただきありがとうございます。
申し訳ありませんが、お客様の投票の記録に失敗しました。もう一度試してください。
違反を報告
レビュー を日本語に翻訳する

Veronica
5つ星のうち5.0 Great Entertainment and Thats All
2012年5月24日にカナダでレビュー済み
Amazonで購入
Purchased and watched the new FMA film and here are my thoughts and impressions. In terms of presentation for the physical box, funimation did a fine job as always. The outside slip is all nice shiny and glossy and the inside blu-ray has 3 discs (if you got the 3 disc version). In terms of content, the movie is set in the world of FMA brotherhood but the animation looks slightly different than brotherhood (better and more appealing in my opinion). The movie has nothing to do with the anime unlike the shamballa movie for FMA. It takes place in this country Milos (again not existent within the anime) around the time when Ed and Al learn that they need humans to make the stone. In terms of entertainment the movie does well. There are enough flashy action scenes, blood and explosions to be completely taken in for the 2 hours your on the couch. But unfortunately unlike the shamballa movie, this one will not change your life or move you in any way. It feels like a 2 hour long OVA that you will not remember for the rest of your life and since it has no connection to the anime, most people would discard it from their memories once they finished watching FMAB the series. Now dont get me wrong, the movie itself is not bad, its actually quite good. So what if its irrelevant to the story, its own little setting and characters with their conflicts drive the story well. There are plot twists that will keep you entertained and lots of little in-movie things that are pure FMA like you know and like. Overall, I say the movie is definitely worth a watch. For anime or FMA fans its a must buy for collection purposes. Go into the movie expecting to be entertained for 2 hours, dont expect any dramatic new information that will expand your FMA horizons, just watch it and have fun discussing those awesome action scenes with your buddies later on in the day :D
続きを読む
2人のお客様がこれが役に立ったと考えています
役に立った
フィードバックを送信中...
フィードバックをお寄せいただきありがとうございます。
申し訳ありませんが、お客様の投票の記録に失敗しました。もう一度試してください。
違反を報告
レビュー を日本語に翻訳する

Andrew
5つ星のうち4.0 Should've been an 2 part episode.
2014年2月14日にカナダでレビュー済み
Amazonで購入
I feel this movie is not well suited to be called a brotherhood movie but should've been an 2 part episode. Now don't get me wrong... The plot was exciting and the animation and character development was still true to the FMA standards... I just felt compared to Conqueror of Shamaballa, this movie was just not strong enough to represent Brotherhood as it's first movie. Still a good watch and a part of a FMA collection.
続きを読む
役に立った
フィードバックを送信中...
フィードバックをお寄せいただきありがとうございます。
申し訳ありませんが、お客様の投票の記録に失敗しました。もう一度試してください。
違反を報告
レビュー を日本語に翻訳する
その他の国際レビューを読み込む

nick
5つ星のうち5.0 Awesome Movie!
2014年2月5日にカナダでレビュー済み
Amazonで購入
Fullmetal Alchemist: Bortherhood was a great series, and the movie "The Sacred star of Milos" expands on the story. I would recommend this to anyone who has watched the series, and to anyone that wants to get into it.
続きを読む
役に立った
フィードバックを送信中...
フィードバックをお寄せいただきありがとうございます。
申し訳ありませんが、お客様の投票の記録に失敗しました。もう一度試してください。
違反を報告
レビュー を日本語に翻訳する

Ray-Review
5つ星のうち5.0 Beautifully Different
2012年4月25日にアメリカ合衆国でレビュー済み
Amazonで購入
Fullmetal Alchemist (particularly Brotherhood) has grown to be one of my favorite animes of all time involving great storytelling & action. When I heard of the Sacred Stars of Milos movie I was pretty excited about it, after finishing the Brotherhood series I just wanted MORE Alchemst. This movie is supposed to take place between episodes 20 and 21 in another country of Creta which would be to the west of Amestris of the Brotherhood series, where Ed gains newfound inspiration of returning Alphonse's original body back, in theory the storyline works but the inconsistancy of the movie's setting may annoy die hard fans, personally I can care less because the timeline DOES have space where the movie CAN actually occur so it does not bother me. The animation in this movie is distinctly different then the Brotherhood series, and I cannot believe the negative feedback it recieved. The animation is done beautifully in my opinion, filled with a bright variety of colors, well-incorporated moments of CGI and fight sequences that made FMA wonderous to watch. This style of animation is very reminicent of Hayao Miyazaki's films in the late 80's and 90's. The english dubbing was very well done, as expected from FUNimation productions, with all of the english voice actors reprising their roles including the flamboyant Vic Mignogna (voice of Ed) which is always a joy to hear. I am not going to spoil the plot for the movie, if you wanna find out about it buy this movie or read about it online, but in my opinion this movie was a great time.

The Extras, are pretty standard from FUNimation, a couple of trailers from up and coming anime series, a couple of web promos and trailers of the movie itself. However, they have included a nice 30 min (give or take) making of Sacred Star of Milos featurette with the Directors and producers as well as the original voice actors of the movie. It was a nice feature adding a nice in depth look towards the hard work behind the movie including the difficulties of intergrating a movie that would fit in the series canon as well as keeping true to the FMA world that Hiromu Arakawa created. It was a nice touch when compared to the awful special features that FUNimation is infamous for. Also included on the first disc is a humorous commentary track from the U.S. cast voicing out their feelings about the dubbing process and overall love for the FMA franchise. If you love FMA then buy this movie, there is no reason why an FMA fan would not like this movie.
続きを読む
6人のお客様がこれが役に立ったと考えています
役に立った
フィードバックを送信中...
フィードバックをお寄せいただきありがとうございます。
申し訳ありませんが、お客様の投票の記録に失敗しました。もう一度試してください。
違反を報告
レビュー を日本語に翻訳する

Roman
5つ星のうち4.0 Solid, but not the standard perfection fma is known for.
2012年5月3日にアメリカ合衆国でレビュー済み
Amazonで購入
I consider both Fullmetal Alchemist series to be the greatest anime of all time, so obviously I was very excited to hear of this movie. If you have seen any of the side story Bleach, Naruto, or even Pokemon movies, you should know what to expect. Your standard main characters go to a new town, meet some new characters and beat the bad guy story.

The story was very solid, although the first half was a little boring but it really picked up with twists and lots of action in the second half.What disappointed me was that this movie was missing the humor that Fullmetal Alchemist was known for. Yes we have seen the short jokes and cat-filled Alphonses before, but I would have enjoyed it for nostalgia and fan-services sake. It just felt like it really didnt focus enough on Ed and Al, which annoys me with these side story movies, because lets face it, thats why we are watching. I know they have two entire series and a movie dedicated to the brothers, but still I didnt watch it for the new throwaway characters. Overall though, very good.

The new art style is a mixed bag for me. They were clearly going for a mix of the series with a Ghibli-esque, very rounded, look. I enjoyed this for the most part. It was something new and different and looks awesome on blu-ray. It was still a shock to the system at some times, and background characters often looked horrible.

The animation itself was awesome. The music was pretty good too.

The dvd was 2 discs and the bluray 1 disc. The extras include u.s. cast commentary, and some funny history lessons from Roy Mustang, which unfortunately Funimation didnt decide to dub.