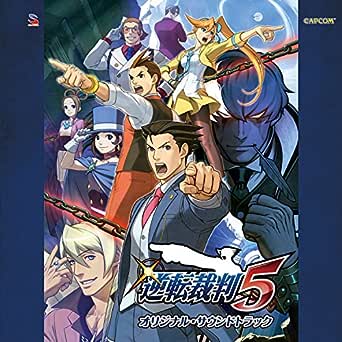 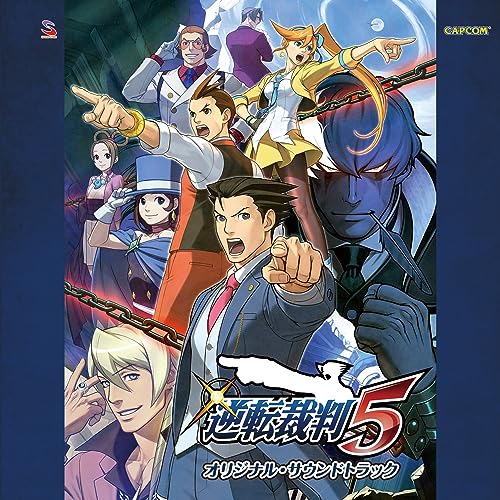 The soundtrack also has a couple of promotional tracks as well

I would recommend this to anyone who likes orchestral, a fan of the ace attorney series, like noriyuki iwadare's work or to anyone who enjoys having their mood swing all over the place
続きを読む
違反を報告
レビュー を日本語に翻訳する

Relytia
5つ星のうち5.0 An amazing Ace Attorney soundtrack and one of the best in the series even. It is that good.
2013年12月3日にアメリカ合衆国でレビュー済み
Amazonで購入
Can anyone deny the greatness of the Ace Attorney games? I honestly haven't come across a single soul who doesn't love this series, and that even includes the vast jaded, cynical expanses of the internet. One the most distinguishing features across the entirety of the series are the consistently amazing soundtracks. Ace Attorney: Dual Destinies is no different. I realize this is all highly subjective, but in the opinion of this longtime AA fan, this is one of the best soundtracks in any Ace Attorney game. The reason I say this can be boiled down to two different reasons: 1.) The leap in quality of the instrumentation utilized, and 2.) The musical compositions themselves.

First off, the instrumentation. Much of the soundtrack in Dual Destinies utilizes very high-quality samples that gives the game a genuine feeling of top-tier orchestration. AA music has always been some of the most majestic, exciting music of any game series, and the sheer detail and variety of instrumentation in DD really compliments that well. It's a match made in heaven. Some tunes from the classic games make a return in this game in some form or another, but because of the huge leap in sound quality, they feel brand new again. For instance, Phoenix's "Objection" theme is largely the same one he had in  Trials and Tribulations , but now with a flourishing style that is much more emphatic and exciting, and  Apollo's distinct Objection theme is reused for him , but with a much more rockin' vibe rather than the laid-back grooviness of the original. Both sound absolutely fantastic. These are just a couple examples, and there are several others that are just as thrilling to hear. There are even some new tracks that have traditional Japanese music that are really neat thanks to the orchestration. Really, whether the music is a nostalgic throwback or is a brand new tune, the quality of the instrumentation really compliments the overall quality of the soundtrack. Fantastic job here.

As great as the instrumentation is, it's only awesome because of the brilliant compositions themselves. While Dual Destinies features quite a bit of nostalgic AA music, much of the soundtrack is brand new and let me just say, mmm mmmm MMMMM is it delicious! The series standards all get new iterations in this game, and all are very good. Some are jazzy and upbeat, such as the "Logic Trinity" and "Core investigations" themes. Others are more majestic and sweeping, like "Court Begins or "Breakaway." Others are incredibly epic, dramatic, and adrenaline pumping, like the super awesome organ heavy "Confess the Truth" theme, or the incredible "Moderato" and "Allegro" Cross Examination themes, which are in the bizarre 7/4 time signature (I think the cross examination theme in this game may be my favorite in the whole series). Some are very cool in a low-key but very groovy way, like the "Court Lobby" and "Investigation Opening" themes, which make very awesome use of synchronized piano and bass guitar flourishes. Very cool. The "Reminiscence" songs are so emotive, even downright touching at times. They're exceptional. The "Elegy" theme feels straight-up like classic noire, it's so solemn and atmospheric, as if the world outside your window is in perpetual rain. Most importantly, the new "Pursuit" theme really lives up to the series' legacy. This one has a ton of variety to it, with much being suitably fast and rousing, interrupted by slower break-downs filled with space-rock guitars that make you feel like you're launching through the stratosphere intellectually in court. Overall, the archetype themes that DD introduces to the AA mythos are incredibly good.

New character themes are fantastic and are super fitting. New crazy/lovable sidekick/playable attorney Athena Cyke's music is incredibly catchy and well written. Her Objection theme is ridiculousy good. Simon Blackquill is easily my favorite rival prosecutor since Miles Edgeworth, and his theme, "The Twisted Samurai," is such an exquisitely written song. It's as sophisticated and honorable as the man himself. Awesome. The new detective, Bobby Fulbright, gets his own glamourous theme that is as over-the-top and charming as he is. All other character themes, whether written around a quality several characters in the game share, or specific to a certain character, are all perfectly written for their purpose. Many new scenario songs show up that are equally fantastic. I'd happily go over every last track and tell you why it's so good, but that'd be redundant. Simply put, the whole soundtrack is fantastic. While a lot of songs are simple and catchy enough to be instantly memorable, they all have a delicious complexity to them, so that I catch and appreciate more each time I listen to the music.

Once in a while, a game from Japan will have such an awesome soundtrack that I'll feel compelled to import it for my personal collection. Games like  Fire Emblem: Awakening  and  Okami  come to mind, as well as  any Ace Attorney game . Call me a nerd if you like, but I find video game music to often be better, both in terms of melody and composition, than a lot of the mainstream "music" made today. Ace Attorney has always been one of the series whose music I love the most, and Dual Destinies is one of my favorites in the entire series. That really is saying something. The soundtrack is such a masterpiece overall, and it definitely heightens the experience of the already-fantastic game itself. Really though, this is a soundtrack you could easily listen to and fully enjoy any time. Whatever I'm doing, it always feels more exciting and epic when I have the soundtrack from Dual Destinies playing. So if you're a fan of Ace Attorney and its music, or just a fan of fantastic video game music in general, this is a soundtrack you may want to take a look at. I highly recommend it. I hope you enjoyed the review and that you have a nice day. Thanks for reading. Toodles.
続きを読む
11人のお客様がこれが役に立ったと考えています
違反を報告
レビュー を日本語に翻訳する

Wladek
5つ星のうち5.0 Best game OST in history
2017年5月11日にアメリカ合衆国でレビュー済み
Amazonで購入
It's the only OST from a game I've ever bought. All tracks are well written and composed. Would recommend to anyone who's into fantastic music.

And do not get misleaded by the product information - it contains 2 discs, not one ;)
続きを読む
違反を報告
レビュー を日本語に翻訳する