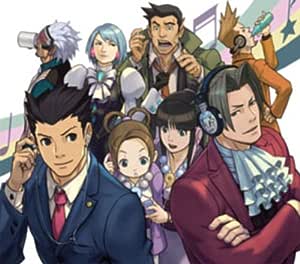 King
5つ星のうち5.0 An Ace Soundtrack for an Ace Attorney!
2012年12月20日にアメリカ合衆国でレビュー済み
Amazonで購入
If you are a fan of the music from any of the first three Ace Attorney games this soundtrack is a must! It has three separate discs, each one serves as an album on its own and represents one of each of the first three games in the Ace Attorney series (Phoenix Wright: Ace Attorney, Ace Attorney 2: Justice For All, and Ace Attorney 3: Trials & Tribulations). Each disc has 34 tracks, and it does not cut any corners whatsoever. Fans of the series know that many of the songs that were introduced in one game came back up again in the sequels. However these discs are all mutually exclusive of one another, and you will never hear the same exact song duplicated on a separate disc.

On the other hand, fans who only enjoyed one particular variation of a song that recurred throughout the series will definitely not be disappointed either. It's all there! For example, whether you're a fan of the "Steel Samurai Theme" as it normally sounded throughout the series, or you prefer the variation at the end of the case when it was re-introduced as a sad song with a slower tempo, or even the cell phone ring tone version that came up later on in the series, this album will provide justice for all! Not to mention, the album as a whole is extraordinarily comprehensive. I have played all three of the Ace Attorney games represented here from start to finish, and I honestly cannot recall any song that got left out from any of the games, no matter how insignificant it seemed or how infrequently it may have occurred.

On top of all of that, the album does not seem at all rushed or thrown together. Every track meticulously loops through the entire melody twice before gradually fading out the third time around. If you have bought video game soundtracks before, you have probably experienced the frustration of when your favorite track just happens to be the only one that does not loop or sometimes even gets cut off early, but you will not experience those trials and tribulations here. No matter what your favorite track is it will be thoroughly played through on this album!

Last but not least, the packaging is fabulous. The three discs come in box that includes a booklet, and both are covered with artwork from the series. Unfortunately, the vast majority of the writing, including the track listings, are written in Japanese so I can't understand what it says otherwise I would post them here. (There is also a special message I can't read from someone I can't identify, but whoever it is looks important.) Either way, the art is very fun to look at and will provide fond visuals as you listen to the soundtrack. To sum it all up, if you love the music from the Ace Attorney series, you will love this soundtrack. Of all the video game soundtracks I have ever bought, this is probably the best representation I have ever seen of any video game!

L. Silvernail
5つ星のうち5.0 Nice packaging, sounds good
2018年2月1日にアメリカ合衆国でレビュー済み
Amazonで購入
Bought this for my teenager that likes Japanese video game music. Thought it good deal for the music for the three games. Hard to find otherwise. Not my type of music, but my other son (14 years old) said it was really good.
続きを読む
役に立った
フィードバックを送信中...
フィードバックをお寄せいただきありがとうございます。
申し訳ありませんが、お客様の投票の記録に失敗しました。もう一度試してください。
違反を報告
レビュー を日本語に翻訳する