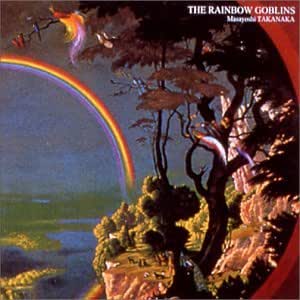 14. YOU CAN NEVER COME TO THIS PLACE

O. Ponce
5つ星のうち5.0 Rainbow Goblins is a family tradition
2015年7月3日にアメリカ合衆国でレビュー済み
Amazonで購入
Bought the book for my nieces and nephews and now buying it for the next generation. I was excited to see that the cd is still available!
続きを読む
役に立った
フィードバックを送信中...
フィードバックをお寄せいただきありがとうございます。
申し訳ありませんが、お客様の投票の記録に失敗しました。もう一度試してください。
違反を報告
レビュー を日本語に翻訳する

Hiram Wylie Justus
5つ星のうち2.0 Not What the Reviews Claim
2008年3月23日にアメリカ合衆国でレビュー済み
Amazonで購入
Sorry, guys; this one wasn't as good as the previous reviews claimed. I plunked down the hefty price for the unit and waited for it to arrive (late and in damaged packaging no less). I had previously purchased the related children's book for my daughter and was hoping that this would be either an audio version of the same (which it is) or some decent jazz music (the book is excellent, by the way). Unfortunately, the music blows away the narration enough so that it won't work as something that my daughter could listen to either before bed or after eating a handful of Reese's peanut butter cups. As far as the music is concerned, Messr. Takanaka is a competent guitarist (he may have grown and improved since this 1981 recording), but he is not well supported. In particular, there is a very rough percussion/drum track for one tune close to the middle of the disc where the job is just not very well done, and the effect is distracting. Mr. Takanaka, at least as far as this disc represents, was (maybe still is) a Larry Carlton devotee, but his technical abilities are (as one would expect) nowhere near those of Messr. Carlton. That being said, there was a good deal of effort expended on the song writing and on playing/performing flawless guitar tracks. Mr. Takanaka's abilities as a guitarist aren't best represented in the head; rather, his solos are where he demonstrates his strengths. Unfortunately, when he is not soloing, the effect is forced and sterile, uninspired, and merely competent. Unless you were a fan of Messr. Takanaka's already or had served in the Far East and had been exposed via a lucky roadside find (the previous owner of that disc must have felt similarly to leave it by the side of the road), I would recommend that you hold on to your $23 or $24 and buy your family dinner instead -- or, better yet, buy two discs of Larry Carlton, or Pat Metheny, or Watanabe, or Scofield, or McLaughlin, or Hedges, or whatever is your cup of tea.
続きを読む
3人のお客様がこれが役に立ったと考えています
役に立った
フィードバックを送信中...
フィードバックをお寄せいただきありがとうございます。
申し訳ありませんが、お客様の投票の記録に失敗しました。もう一度試してください。
違反を報告
レビュー を日本語に翻訳する