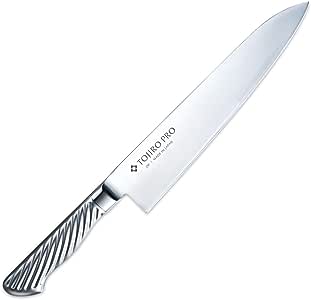 Amazon Customer
5つ星のうち5.0 Good knife
2016年8月27日にドイツでレビュー済み
サイズ: 210mmAmazonで購入
Got knife i like it alot its sharp out of box. Rly light knife its not heavy and i thought it could get slippery but it dont.
続きを読む
違反を報告
レビュー を日本語に翻訳する

Pierce Herrington
5つ星のうち5.0 WONDERFUL knife, but learn how to care for it
2016年3月3日にアメリカ合衆国でレビュー済み
サイズ: 240mmAmazonで購入
This knife is simply amazing. It glides through food like nothing I have ever experienced before. Like any high performance piece of equipment, it takes a little taking care of but it is well worth it. Make sure you know the basics of a Japanese knife before buying this. I had to really search to find information about this knife, so I decided to write an in-depth review after using it almost daily for two months.

Background:
This is my first real chef's knife/gyutou. I am a home cook, I spend around 10 hours a week in the kitchen. Prior to this I've used knifes from cheap but functional knife sets and Dexter Russells. I like the functionality of the Dexters but this is in a different league.

Form:
I contacted Tojiro about the steel in the blade and was told that the blade is identical to the standard Tojiro DP (F-808). The only difference is the steel handle. The two knives felt almost identical in my hand but the PRO was a good bit lighter. The seam between the handle and blade on the F-808 was well finished, but it was completely smooth and invisible on the PRO. Either knife would be a good choice, I chose the PRO because the handle seemed like it would hold up indefinitely and it was better looking.

Function:
This knife is a joy to use. It absolutely glides through food. I do not use it on hard foods like bone or winter squash, but it has handled everything from vegetables to meat with ease. It slices as opposed to crushing, keeping juices in the food and off the cutting board. The metal of the handle has a frost texturing that makes it very secure to hold. It provides a secure grip even when covered in fat or oil, but can be slippery with soap on it. I wish the blade were a little taller to rest higher against the fingers of my non-cutting hand as I hold food, but this could also be caused by poor technique on my part.

Durability:
There have been some people online that talk about chipping with this and other Japanese blades. In two months, I have not had any chipping. I try to treat the knife delicately, but it is a tool and it is meant to be used. I use it on a cheap plastic cutting board and don't use it on squash or bones. It has been lightly knocked against tongs, forks, and other metal with no ill effects. The edge still is completely smooth with a mirror finish. Other than a couple faint scratches on the side of blade, it still looks like new.

Upkeep:
My research taught me a few things about this knife. First, it should never be used with a steel hone, only ceramic. The steel in this knife is harder and more brittle than traditional European knives. The metal in a steel hone is softer than this knife, so instead of sharpening it will only chip your blade. I bought a  Messermeister Ceramic Rod Knife Sharpener, 12-Inch  and it has worked well so far. Because this knife is so hard, I only need to hone it every few weeks as opposed to daily with traditional blades. I can hone a European style blade easily, but it has taken some time to learn to hone this knife. The blade angle is significantly smaller than a European blade. I'd recommend drawing on the edge with a permanent marker until you learn how this knife feels on the ceramic hone.

Sharpening:
After 2 months of heavy use, I haven't had to sharpen the blade yet. I hone with ceramic as needed and the knife is still razor sharp. The manufacturer recommends a whetstone to sharpen the knife.
続きを読む
3人のお客様がこれが役に立ったと考えています
違反を報告
レビュー を日本語に翻訳する