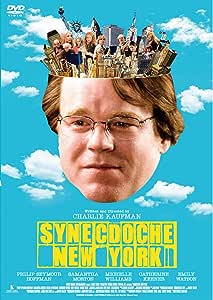 Mark Chapman
5つ星のうち5.0 Wonderfully enthralling...
2012年2月12日に英国でレビュー済み
Amazonで購入
Charlie Kaufman just gets better and better, and more and more enthralling! If you enjoyed Being John Malkewich, Adaptation, and Eternal Sunshine of the Spotless Mind, etc. then you will really enjoy this film. I hardly need to say more than that. (Others here have put it far more elequently than me!!) It's dark, weird, puzzling, strange, bizarre, totally original and utterly absorbing. I even thought there were shades of Eraserhead every now and then. Particularly when Caden is visiting the various medicos, due to his paranoia about his health, with the ominous hum of machinery ever present in the background! Definitely one to watch again.

There seems to have been a real campaign against this film on the basis that there aren't any subtiltes on the DVD! I sympathise with those who are hard of hearing who have been unable to enjoy this film because of the lack of subtitles. But to give it a one star review on that basis is totally misleading. This facility should be used for reviewing the film itself, NOT the way the DVD is produced. As a result, the average star rating has been completely, and negatively, distorted through no fault of the film itself. However, after the main protagonists had mumbled their way through the first few minutes, I, too, tried to put on the subtitles, (because I think if there's dialogue there, it must be worth hearing) only for it not to work. I thought it was the fault of the player, or the remote wasn't working. So I just went back and watched it again and picked up more the second time!

My own personal criticism of the dvd producers (as other reviewers here have pointed out) is putting "hilarious" on the cover, and "smash-hit comedy of the year". (And a 4 star review from the News of the World?? Who were they trying to kid? Was it because Emma Watson takes her top off and says "Fancy a ****?" or words to that effect...) Surely they must realise that this just gives the completely wrong impression! Funny peculiar, yes, but not funny hilarious!

Dalea11
5つ星のうち4.0 Hoffman Makes It Worth Watching
2015年4月12日に英国でレビュー済み
Amazonで購入
Interesting film although it doesn't live up to the hype that surrounded its release. Philip Seymour Hoffman is superb and really carries the film. The central conceit of the film (i.e. the representation of NYC within a warehouse - which has a warehouse within it that contains a representation of NYC ad infinitum) doesn't really come together as we only ever see a tiny corner of the director's (i.e. Hoffman's) world within it. The film as a whole really relies on using the Borgesian concepts dealt with in stories such as The Garden of Forking Paths, The Circular Ruins and the Library of Babel. But Borges does it so much better and so much more economically. Still an interesting film to 'have seen' and - as I said - Hoffman is superb.
続きを読む
1人のお客様がこれが役に立ったと考えています
役に立った
フィードバックを送信中...
フィードバックをお寄せいただきありがとうございます。
申し訳ありませんが、お客様の投票の記録に失敗しました。もう一度試してください。
違反を報告
レビュー を日本語に翻訳する

Aaron W
5つ星のうち5.0 5 Star film, 3 Star Extras, 4 Star P&P
2014年4月22日に英国でレビュー済み
Amazonで購入
First off, the film is incredible - no complaints there. It is a dense, sometimes alienating, but richly rewarding and personally affecting film. The acting and actors are all good, with the notable exception of Philip Seymour Hoffman... who shines above the rest with (what my now be seen as) a personal performance; almost animalistic in it vulnerability, but deeply human in its complexity. The production design is impressive, the visual effects are subtle, the direction is very solid. But the thing that make Synecdoche, New York a 5 Star film ("the best of the decade" according to Roger Ebert) is the screenplay. What Charlie Kaufman has achieved transcends the limitations of conventional cinema. The screenplay may not be the most romantic, entertaining or thrilling, but it is intricate, dense, and personally rewarding for those who want to delve into Kaufman's mind - surely one the greatest screenplays ever written. I have always thought to myself that if you don't like this film then you can count yourself as lucky, because that means you aren't as troubled, depressed and anxious as the people shown in this film.

The Extras on the Blu-ray are mostly substantial, but ultimately unrewarding for the films biggest fans (or skeptics).
In and Around Synecdoche, New York - goes into the production of the film, from the design, makeup, and effects.
The Story of Caden Cotard - an interview with the late Philip Seymour Hoffman about his character.
Infectious Diseases in Cattle - a bunch of "blogger" sit round a table for half-an-hour being discussing the film, flimsily covering there obvious lack of knowledge into the intricacy of the screenplay.
Screen Animations
Script factory masterclass with Charlie Kaufman - a paradoxical lesson about writing from the writer who seems so against the idea of unoriginality in cinema writing.

Postage and Packaging is all good, got here (the UK from the US) is a reasonable amount of time, undamaged.
But the actual Blu-ray case is thinner than other Blu-rays I have, it is about 9 mm "deep" (I'm not sure if that is the right word, but I hope you get what I am saying), rather than the conventional 15mm "deep". Is this because it is from America, the land where the only things thin seem to be their paychecks and their blu-ray cases?

Overall, buy this blu-ray for the film if you are an incredibly troubled individual. If you don't worry about death, love, life, art, purpose or meaning then stay clear of this film.
Also I would recommend you watch all other Kaufman films first to get an idea of the themes and ideas at play in Synecdoche New York (Being John Malkovich, about art and existence, Adaptation, about the writing process and purpose, and Eternal Sunshine of the Spotless Mind, about Love, life and the mind).
続きを読む
役に立った
フィードバックを送信中...
フィードバックをお寄せいただきありがとうございます。
申し訳ありませんが、お客様の投票の記録に失敗しました。もう一度試してください。
違反を報告
レビュー を日本語に翻訳する

David Nissen
5つ星のうち3.0 Hoffman as always gives a great performance.
2016年4月26日に英国でレビュー済み
Amazonで購入
When the production people have to resort to making charts to keep themselves on track , what chance do the audience have ? The first half or so is fairly plain sailing , but when the main character starts to lose his way , so do you . The second half is hard work . Hoffman as always gives a great performance .
続きを読む
1人のお客様がこれが役に立ったと考えています
役に立った
フィードバックを送信中...
フィードバックをお寄せいただきありがとうございます。
申し訳ありませんが、お客様の投票の記録に失敗しました。もう一度試してください。
違反を報告
レビュー を日本語に翻訳する

whatever it says about it being a comedy on the cover- didn't feel at all funny to me - but a beautiful piece of creative work - by all involved and made me glad
続きを読む
1人のお客様がこれが役に立ったと考えています
役に立った
フィードバックを送信中...
フィードバックをお寄せいただきありがとうございます。
申し訳ありませんが、お客様の投票の記録に失敗しました。もう一度試してください。
違反を報告
レビュー を日本語に翻訳する

Timothy Ault
5つ星のうち5.0 Original, unpredictable and imaginative...
2010年2月17日に英国でレビュー済み
Amazonで購入
...not to mention a fantastic acting performance by Philip Seymour Hoffman and superb backup from the cast.

The basic plot: a toiling theatre director from upstate New York wins a lucrative grant to bring a play to New York, where he converts a warehouse into a mini-metropolis, complete with actors playing actors from his own plays and his own life (including himself).

Charlie Kaufman (writer/producer of Eternal Sunshine of the Spotless Mind, Adaptation and Being John Malkovich, among others) has produced his best work (this he wrote and directed). If you like Kaufman you'll love this -it's richer, weirder and more complex, but nevertheless, one of those films you don't want to end.
続きを読む
役に立った
フィードバックを送信中...
フィードバックをお寄せいただきありがとうございます。
申し訳ありませんが、お客様の投票の記録に失敗しました。もう一度試してください。
違反を報告
レビュー を日本語に翻訳する

Hywel Roberts
5つ星のうち5.0 Great Film, Not Sony Classics and Not For All Regions !!
2014年9月25日に英国でレビュー済み
Amazonで購入
Brilliant film, dense, emotional, and superbly acted. However the disc I ordered from passionFlix on the Amazon website comes from Canada and was a REGION A blu-ray, not, as shown on the web page, suitable for all regions. It wasn't even the Sony Blu-ray that Amazon have represented on the web page !! The result is my player won't play it and I'm having to send it back- all the way to Canada. Make sure your player is suitable to play region A (1) discs before ordering from PassionFlix- you have been warned !
続きを読む
役に立った
フィードバックを送信中...
フィードバックをお寄せいただきありがとうございます。
申し訳ありませんが、お客様の投票の記録に失敗しました。もう一度試してください。
違反を報告
レビュー を日本語に翻訳する